Found a DIY from 10years ago in my searches, an idea that has now been adapted in many closed foil kites. <<LINK1>>

I have a used 19m Speed3 that flys with the Leading Edge pushed in on almost all of the cells. It inflates quickly and flies well. I made new mixer lines with 7/64” Amsteel, the correct lengths, and adjusted the mixer A=Z=B=C and A=Z, B-1.5, C-3, with no change to the LE. I removed the WAC like the 21m Speed3 and no change. The kite holds air fine, but not as good as a new kite. I read where kites that with porous fabric maintain less pressure and the wing shape is less rigid and easier to deform. So I recoated the kite using Marine Goop. <<LINK2>>

Inflating the kite on the ground before and after with a fan it held air better after recoating but on the ground the LE shape was always correct. Then I flew the kite and no change I could tell to lessen the pushed in LE cells. I could next measure the lines and compare it to the line-plan that Flysurfer publishes. But, I’m not convinced the front of LE is a line shrink/stretch issue. Since almost all of the cells along the LE are dented inward, not just one or a few, and it seems logical that higher internal pressure force would help the LE keep shape against the wind. The denting inward effect seems to be more pronounced when I’m moving on the water than when flying static.

I’ve read the early Ozone/Chrono kites were criticized for leaking pressure along the seams and deflated quickly once landed. The new/old PL Arc and new FS Bridled foils hold their air quite a while after landing. I was wondering if Ozone added the LE rib stiffeners to solve lower internal pressures and/or give the kite a longer life. The race foils keep trying to get a thinner profile which has less volume allowing quicker internal pressure changes and performance would be lost with a deformed LE.

Any good ideas on adding LE stiffeners a closed cell foil kite?
Or...other ideas that might push the LE back into shape?
Top

Brand Affiliation: None
Has thanked: 31 times
Been thanked: 34 times

How about some inflatable tubes?

I kid. The LE stiffeners on my Chrono work well. I think Paravis (Spelling may be off. I think Eastern European) also uses the stiffeners.
Top

Possibly the plastic filament for a 3d printer or a weed whacker? Could attach with AquaSeal or ripstop tape. I would be curious to know how it works out for you.
Top

The stiffeners are basically grass cutter nylon line, which is sold in many hardware stores. According to http://www.paraglidingforum.com/viewtop ... e0#p244350, the first paraglider used them in 1999.
Top

Thanks for the tip and link gwicke. I can see the paraglide community/forum has all kinds of information and have been perfecting LE reinforcements for over a decade. I found some good information on that forum.


Leading edge reinforcement is one of the many ways to keep the right profile shape. As you know at normal position the stagnation point of the foil is somewhere in the openings of the wing. In this case the internal presure help the cloth structure to be presurised and keep the shape. When you put the speedbar stagnation point goes upwards of the foil and is on the cloth of the cell above the openings. So in this case the external presure in this point is little bit more than internal and you can see that leading edge between the cells is deformed...

...I had one glider a few years ago that even at trim speed, there were big ugly indentations in the LE, between the ribs, from the higher external pressure. I can't imagine what this did to the performance - it also was inclined to vibrate when on the speed bar ... Fortunately, I sold it before it went porous.

This would be strange to see on an open-cell paraglider? But on my FS closed cells it is easy to see and somewhat confirms my theory the cause is lower internal pressure caused by the kite becoming more porous.

Found a good article on the subject and a funny acronym 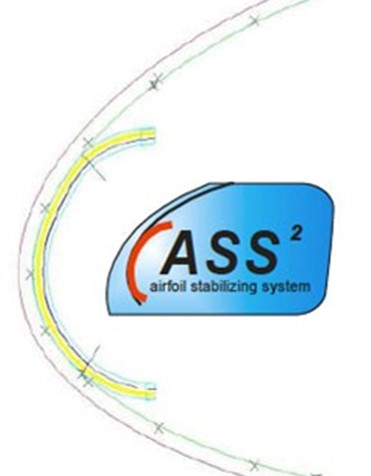 Thinking of an ugly but effective non-destructive test, maybe some weedeater line and removable fabric tape or a re-dissolvable glue applied while the kite is inflated on the ground?
Top

It is worth to know that the deformation on the Speed 3's is intentionaly designed and if the middle valve is open (and your kite is Ok condition and hold some air) than it only occurs when the bar is somewhere in the top 50%, so when you actually want to depower your kite. As far as I know the kite is designed to deform and will produce less power by deforming. Deforming is also helping to keep the kite a bit more deeper in the wind window so it does make it more stable. If you check the middle valve on this kite there is a little picture trying to explain this.
I did an experiement in 2011 that there was a kite which was a Kitech Fly3 19m and I get the manufacturer to produce the same kite for me just with LE Stiffeners added (which are now widely used in paragliding and also on the race foil kites but not in that time). The result that the kite got more performance but with the same mixer set up it became super unstable as it was rushing through the edge of wind window and collapsing. So finally it had to be set to totally different mixer set up just to make it flyable. I guess it had some more advantage over the original Fly 3, but it was a shitload of amount of work for the designer as he had to create a total new mixer set up for this kite.

As far as I know (on the Speed 3s and Kitech Fly 3s) the intake valves had a certain position which makes the kite totaly inflated in a higher AOA and not inflating totaly in lower AOA and this results the deformation on your leading edge. I guess you can solve the problem of the deformation much easier, by changing the intake valves position a bit, or making a few more intake valves, or making the same type as on the Sonics for example. This will keep you profile fully inflated all the time and the kite will have a lot more performance I guess, and then you can start working on new mixer set up as I also guess the kite will be pretty much unstable, so you can start thinking on reflex profiles for your Speed 3, etc. This is nice experiement anyway if you have a lot of time. By the way after this Kitech Fly 3 proto, my next kite was a Speed 3 15 DLX and Speed 3 12 M DLX and they were working much better with the deformation than the Kitetech Fly3 proto. Now I have also a Sonic 1 15M and for sure that is an other level.
Top

@pugetsoundkiter, there was also a thread about attaching rods externally & slightly to the side of ribs, which might be interesting for retrofitting: http://www.paraglidingforum.com/viewtopic.php?t=79154
Top

Just measured the nylon rods on my F-One Diablo, as I need to replace one. The diameter is 2mm.

10m of this stuff ship for less than $2 on ebay or aliexpress. Search terms: "2mm nylon grass trimmer line".
Top

The speed3 is unfortunatelly subject to this as soon as the cloth becomes porous (even central valve open to give more internal pressure)... I spent dozens of hours and money to try to solve that ugly Leading Edge. You can try a light recoating , there is some topics about that. I would try nanoprom Seal and Glide as a minimum.

For stiffeners I used to add some on an old speed2 that I transformed to single skin. 3D printer wire become far too fragile after some exposure to UV and breake inside kite. Grass cutter nylon line work like for paragliders but I found them a bit soft vs weight. I had prefered tennis raquet strings (up to 1.6 mm) that are thinner to include inside existing kite seems and are stiffer and un-breakable.
Be careful to the endings that sould not cut the kite with wear (not easy part, mayby try ductape to soften the endings but this will add significant weight).
Top
Post Reply
14 posts