Overall :
- I can foil earlier than 12m but about the same as 15m ; however a heavier rider could gain low end vs 15m
- enormous power in about 6-7 knots ; I finally liked that during 1.5 hour ride
- less agile than 12m or 15m, but lulls does not exist anymore when riding !
- good legs training !

Day 1 in marginal wind (personal anemometer was between 0 and 3 knot on the ground ; do not trust figures but just to fix ideas):
- not really reasonnable to test with such poor wind but I had not riden for months ...
- inflation is longer than P12 and P15
- stays easy in the air, no need to work the kite; you can let the bar off during many seconds (similar to 12 and 15)
- good drift if you pull the front lines
- I have not been able to foil-up; it was very close once or twice (hence 20 minute tests) but I failed
- I went back to shore without putting the kite in water

I think that I am a bit too light for the water start : ignitiating the first part of the loop was requiring more pull on the bar than a smaller kite, and this led to be draged downwind a bit; I was then loosing part of the wind window for the loop due to my relative negative speed that made only 2 knot available for the kite

Day 2 in high end: personnal anemometer (another old model) showed 14 knots but it was rather 7-11 knots
- not a day for a 18m with 30 m lines, but I wanted to get an idea of the high end and usable wind range
- a bit affraid , but I raised the kite , in the middle of the wind window, without pre-inflation ( I am too impatient)
- inflation still longer than 12m and 15m, but very safe
- almost autozenith when you let the bar go
- waterstart was amazing : I started foiling-up before having finished to raise up on the board !

- enourmous power; a bit scary ; but after 30 minutes I loved that and did not want to swap with 12m
- in 10+ knots, 90 degree direction was too physic and too fast for my level, so I mostly did hard up-wind or downwind angles like on race
- toe side was viril but still doable in 12 knots, kite high
- I lost one strap and finished strapless : no worry despite my poor strapless level
- turning is wide, slow and powerful, but I forced myself to try a downloop during a air jibe : i went very welle and did it for every jibes ; when you are surprised and pulled downwind more than expected, kite stops and pause in the sky, waiting for your end of turn to re-tension the line and finish smootly the loop (you have to be careful here to avoid dropping in the water)


Need to persever on the ultimate low end and find a way to counter-balance the drag downwind (start like a superman trick? ) ;
=> I think it is the ultimate light wind weapon for rider above 75 kg since it has tons of power and fly in unbelievable light wind; for riders like me 15m seems the optimum for now. The 12m is the funnier I feel, but you loose a bit of low end.
Top

Do you have comparison with an 18m DiabloV1 or Sonic2?
Or can organize a comparison of this two/three kites?
What's the weight of the 18m pulsion?
Top

I have not riden diablo and never saw one during my ride. About sonic2, never riden personally but often present im my spots. You need higher wind to fly the kite (about 1 knot when working the kite and 1.5 knot stable at zenith), definitelly. But once on planning with a bit more wind you go faster with sonic. However i was riding almost as fast as Elf joker 15m in shorter line, (so already too fast for my level at 90 degree ride so I was avoiding this direction). Sonic2 is less stable and "Plug and Play", very appreciated kite however.

Are there further experiences or comparisons with other kites!?
Top

here is the video of the very light day without success of water start, visible on mobile phone only:
https://youtu.be/Rx5U9epXywA

For those who cannot acces it , here is the same without music as requested by Youtube:
https://youtu.be/5O9ZqwYNe08
Top

Kite looks very good for light wind, fly's really well which I would say is because of the lite weight. Wind was definitely sub 5knots. More camber through WAC and changing mixer some would make your water starts much easier.
Top

I have set the camber at the limit of frontstall / backstall at the zenith (I Always do that). More camber may lead to some "yoyo" effect at the zenith (and 4 slack lines...) and instability if not worked from the bar (That i need to avoid because of swimming backward without touching tge bar in my 90 % Frequency on-Shore winds).
Top 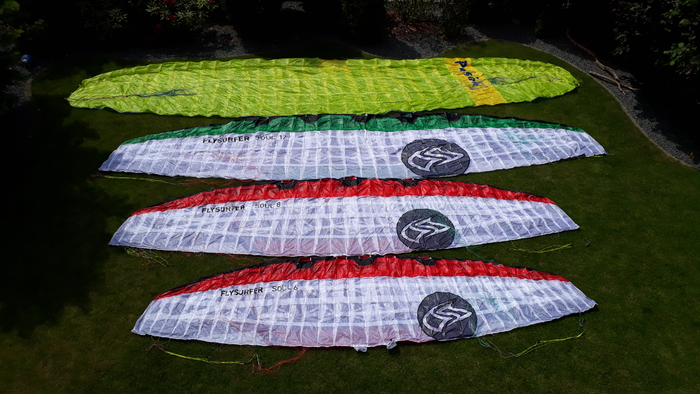 Interesting you choose Pulsion over soul for light wind, weight is incredible. The soul has an interesting shape, very curved TE.

@Regis have you tried a Bar adjustable camber setup, like with adding extra front lines?
Top