bragnouff wrote: ↑
Mon Apr 12, 2021 10:36 am
Maybe it's different on the snow but it would also be my opinion that, when kitefoiling, my 9m wave LEI has better upwind abilities than the 5m Peak4. I also think it would have a higher top speed, although the limiting factor for that is in my thick surf foil which tends to max out at about 22-23 kts when pushing it hard, so top speed isn't really a factor there. I'm pretty sure I can point a bit higher with the LEI, which seems to have a wider wind window, and more forward pull on the edge of the window. (definitely noticeable when body dragging out).
Ease of use, setup and downwind abilities of the Peak still make it my first choice for foiling.

I mentioned "snowkite" but on my small competition the surface was 'soft' ice and some thin snow patches so that edges held against it without sliding. So it was like with hydrofoil, very minimal friction and on ice so no need to "lift&keep" my mass as wing loading to hydrofoil. Naturally on snow/powder would require more force to pull, similar to body dragging if you want to maintain speed.

It could be that when sheeting kite more kite flies more deeper in WW, and as anchor (=board) speed increases WW rotates more relative to truewind, and if you don't sheet Peak4 out "just" correct to redirect kite's pull more forward it might seem to go more downwind than something else. Also leg pressure should be minimal, it is not like a LEI that you lean against kite and more speed more lean due to downwind hauling. Let it pull your CG, not lift it.

On same session I also rode FS Speed5 12m model which gave me 72km/h speed according to ka72.com, when Peak4 5m max speed was 65km/h. There might be natural variance in wind levels / directions during hours of riding on that day so it is not 100% accurate to compare my track only to myself. Below is the 50km track for the day, on same track is 3x (swapping wing with kite with friends on ice) running Duotono Echo 6m wing, 1x Speed5 12m, 1x Royal Era 12m and Peak4-5m session in the end. I can try to re-upload track by traction device instead of riding speed to do the angle comparison by device, which I just said that it is not accurate. 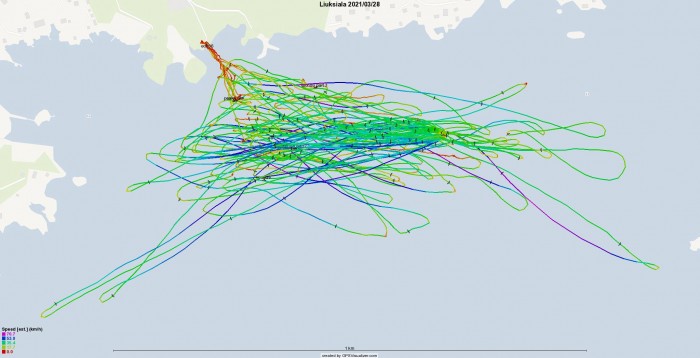 If you come from LEI's only, you might find the Peak4 bridles a challenge to master at first.

If you have had a typical foil kite before, you find Peak4 bridles soooo simple and easy, cant go wrong, can be sorted in a jiffy no matter how much they are tangled, easy peasy.

I will be the first to admit that, for my first two sessions out of the bag (4m and 5m), the bridles were daunting. I assumed they would have come untangled and correct, but they didn't (maybe someone at the shop had taken it out and fiddled with it; I don't know), and it took me forever to get it right. I initially put the 4m up with a line crossed somewhere and fortunately realized it before I got on the water.

For my third session (second on the 5m), I was worried that, although I'd left the bar attached, things might have gone sideways when I was rolling up the kite the previous session. Fortunately, it was plug and play. Took me less time than it would have to set up a tube.
Top

All that will wear off by session 25.

I'm sure everyone has their own idiosyncratic routines, but "routine" is the key.

I lay my kite out the same way (either side) with the board on its side, the rail on the folded over upwind tip, undo the bar until I've undone a couple wraps of flying line. Shake/separate the two sides of the bridle. I like to run a finger under the first bridle line at the LE wingtip and clear it back to the flying lines to separate the front and back lines while just casually observing the bulk of the grey bridle lines to pick up on any looped knots. They are rare, but worth looking for. Just running that line from the wingtips lets me set the LE and wingtips and entire bridle for consistent and predictable launch. Being just as consistent when packing up means I don't have to clear the flying lines and will untwist any rotations once its up. Takes less than a minute if your motivated.
Top

Have tried side launching with a bit of sand on the upwind wingtip but my 4m tends to drift downwind and hot launch. I find the peaks deliver a robust and sometimes unexpected amount of power as they fly to the zenith vs. the souls for example.

Side launching with someone holding it certainly would help but curious what others find. I'm about 85 kg
Top

I always hot launch, and at 65kg with the bar sheeted out, I get pulled very little if at all.
I would suggest if you're finding your hot launch is too powerful your Peak4 is too big. Go to the next size down.
I'm assuming you're using the Peak4 for hydrofoiling? If not then ignore what I've said.

Have tried side launching with a bit of sand on the upwind wingtip but my 4m tends to drift downwind and hot launch. I find the peaks deliver a robust and sometimes unexpected amount of power as they fly to the zenith vs. the souls for example.

Side launching with someone holding it certainly would help but curious what others find. I'm about 85 kg


I have done it sometimes, eventhough rare, as I take the 3 m2 instead usually.
But some got the 4 as their smallest, so they have to launch powered now and then

The key is to put sufficient sand on the tip, you can either fold the tip, but even better just put the sand on the lower side - and it will not slide at all

Folding the tip can lead to unexpected behaviour is my experience, when the sand drops off all of a sudden - so a "reasonable" amount of sand on the lower side works better.


I'm assuming you're using the Peak4 for hydrofoiling? If not then ignore what I've said.

Yes - but I use it for high wind days and when we get some waves here on Lake Ontario.


but even better just put the sand on the lower side

- mind clarifying what you mean by "lower side"?

Anecdote about going upwind: While I also find the Peak4 on foil much better than LEIs on TTs or surfs, the other day I tried to follow two new guys on the water, who were pushing strong on foils with quite big foilkites, without any brand labeling. My angles were so bad as compared to theirs that I started to say myself that my Peak4 really sucks upwind.

That was until the guys came onshore and they turned out to be Nico Parlier and Axel Mazella, among the very best foilkite racers actually. They just arrived here (Flag Beach, Fuerteventura) to train and to test new Ozone prototypes. So finally I remain satisfied with my Peak4 upwind angles, and I'm glad how well I can go upwind even toeside, looking to carve into the next wave to surf..
Last edited by lezo on Tue Apr 13, 2021 4:37 pm, edited 1 time in total.
Top

If there is enough space, I launch unassisted, 45 degrees every time. Only hot launch it tight spots or really light conditions.
Use the board on its side weighting along the length of the folded over tip cell (foil upwind). The board makes a nice wind break so your kite lays still and your cleared bridle doesn't flop around. (I clear the bridle as mentioned in the previous post). My pocket board is only 109 cm but is enough wind break to keep the 3 & 4m Peaks calm on the ground in windy conditions.

I don't want the kite to get caught on the board as it launches so pull up the downwind tip in slow enough fashion to let the folded tip pull out from under the board before I step back to tension the lines. Usually its perfect, but occasionally the kite will float downwind before it fully takes shape. You kind of have to expect that and and move toward the launching side and upwind as the kite takes shape. That way the kite only moves a couple meters from the board before its essentially in hot launch position and goes up. I hold the bar in one hand and pull the kite up with the other hand holding the front lines up close to the split. That way you can pump the fronts or pull in to mitigate the power of a hot launch.
Last edited by jumptheshark on Tue Apr 13, 2021 4:42 pm, edited 1 time in total.