Also, note that the lack of inertia means the Peak4, in particular the smaller ones of course, can accelerate when you fly them up.

Whereas tubes lacks all kind of power when flown up, if the wind is on the verge.

This is IMO the major advantage of these kites, making them have a lot higher fun factor (power on demand no matter which direction if flies), and also ability to start in less wind.

I think the key question is how much wind do you want to be able to foil in? This has been my first full season foiling with a bigger (1000cm2) wing. I think I've had a similar number of sessions as JTS (perhaps a few less because I've been on my SB in stronger winds). This has been facilitated by the lower water levels on Lake Ontario which have created an easy beach launch 5 minutes from my home. It seems like I have had at least 4 days on the water each week using either an 8m or a 6m wave kite. I would say anything over 10 knots I could use the 8m. Had four sessions on an 11m, which while doable, were pretty marginal at times. 3 or 4 sessions ended with swims.

Don't really feel the need to kite more than 4 times a week, so no real reason to chase wind lighter than 10 knots & no need for a "specialized" light wind kite. I'm thinking a 6m Peak4 & 4m might be the ticket for 10 knots - 20.
Top

I'm foiling with a 1200 and 800 cm2 frontwing with the Peaks. No prob with the smaller wing (actually 790cm) so 1000+ is not essential needed although with the 1200 I can really ride the waves without kite power, the 790 needs a little kite power.
Top

Like jumptheshark stated, the most important feature of the Peaks is not so much about low end, but more about more fun while riding.
It took me 3 or 4 sessions with the 5 m Peak to realize that fun potential. From then on, I got more and more reluctant to use any of my LEI kites for foiling any more, because they all feel so sluggish and "jerky" suddenly.
A 6 m² Peak will surely not be enjoyable at 20 kts, btw. The 5 becomes uncomfortable beyond 15/16 kts, from my point of view.
Top

It's funny how accustomed to flutter you can get. I know its a turn off for others. Was already pretty used to the mitigating reactions from riding clouds which I think facilitated the switch to Peaks. The flapping wasn't anything new and I already understood how to stop it.

It blew 35 knots here for a few hours yesterday and I though I'd try foiling with a 3.5m single strut I picked up last fall. Of course forgot a pump and had to waste a good 20 min to get one... so cliche. Anyway it dropped and shifted by the time I was ready and was not down to more manageable 25 gusting 30. Slightly offshore devil wind in the bay with rotors that make for lulls of zero or even back wind that can be less than 50m from smoke on the water 35+ gusts. You can generally see this stuff on the water, pick your moment to traverse the area on your way out to cleaner wind. The first tack with the LEI was so smooth. Not a hint of flutter and it actually felt great. The LEI definitely has a silkier top end feel. First thoughts were, well, I might keep this kite after all. Then I hit the voodoo wind and it all went squirly. Eventually had to body drag past it to get up and going again properly. The weight and stall of that tiny tube was not very endearing. Out in smoother stuff it was still on/off enough that I was constantly button hooking upwind to re tension lines. Not the best test of the kite, but I wanted to do a back to back so went in and swapped to the 3m peak.

I'm sure there are voodoo gusts that can tie a peak in a knot (referenced by the OK kiteboarder vid on the Peak) but I gotta say the Peak was WAY more comfortable and allowed for actual wave riding in the on/off conditions. Managed to have some fun in conditions that were decidedly less enjoyable with the LEI.

Not ready to unload the tube kite just yet, but certainly wont pump it up for anything but really heavy uninterrupted wind.

As to the flapping. I get why those coming from tubes are put off, but it something I'll happily put up with and advise anyone coming from tubes to give themselves some time to accommodate and learn to mitigate it before they write peaks off. There are plenty of other more important characteristics to enjoy, and on balance these are my favorite kites to date.

Being too lazy to search thru this thread, how is Peak4 holding up over time?
Given the flutter, I wonder if fabric has tendency to wear out near the trailing edge as it does on strutless kites. Naish Trips I have do exhibit this over time despite my effort to use as small size as possible, to minimize the wear from the flutter. Fabric breaks up just in front of the trailing edge reinforcement while the rest of the kite is holding up quite well.
Top

I have been riding Peak4 8m² for 9 months and I still stoked for this kite. Here where I live most of the time the wind is 8 to 12 knots and this kite performance really well, I'm not say that I can ride around 8 knots but as the wind is onshore or sideshore here I can at least return home safely. This kite is so easy to launch, as you can do it without any help, to land I usually let my board at sand and land carefully my kite over the board, letting one of the wing tip be hold by the board.
Right now, every session I crash my Peak4 on purpose on water to train a "reset launch". I've done it 4 times, 3 on shallow water where it's easy , and once I deep water. All those attempts I got 100% relaunch.
So glad to have found this topic and bought this kite.

I have had a peak 4 8m for about 4 weeks, 7 sessions from underpowered to overpowered, so far as a reasonable rider who flies all jibes and tacks (mostly), I’m not impressed. If you think it flies like an LEI then you are wrong. It does stay in that air pretty much until you put it in the drink but I make mistakes an there is no reasonable relaunch. Sitting on the fence. 18LIIKIIZMQ46
Top

@ Kitewin, I think you bought the wrong one. Have been on LEI kites for the better part of the last 17 years. All manner of board, including foil. You can't in good conscience judge any kite model properly based on the larger sizes. An 8m Peak is to the 5m, what a 12m LEI is to an 8m. Drastically different. Remember the Peak was not built as a hydrofoiling kite. The 5, 4, and 3m emerged as a surprise discovery and the 8m was pretty much universally panned by the early adopters. It only came into this thread wayyyyyyy later as those looking for sub 10 knot riding have flooded in and seem happy to put up with a slow kite for the relative safety of not dropping it. That was never part of the early conversation, their speed, handling and depower were the primary highlights.... all of which are lame by comparison in light air sized kites.

The small peaks are simply the easiest kites to fly for anyone with any sort of kiting experience. Takes no time to get them to work, and only a little longer to get them to shine. The 3m is the most sublime trainer kite in novice hands and light winds I've ever seen, even when compared to purpose built trainer kites. It behaves exactly the same in 30 knots as pictured below. The power production is a bit different from LEI, I would argue better, but no bigger difference than the variability among the broad range of LEI kites out there. Certainly a lot more like an LEI than a close cell foil, that does things like accelerate and pull harder when sheeting out in some situations. No, the peak is dead simple and user friendly to fly. Take the overwhelming advice that has been repeated many times in this thread. Start with the 5m.

I've never tried the 8m. Probably won't, unless your looking to sell cheap. 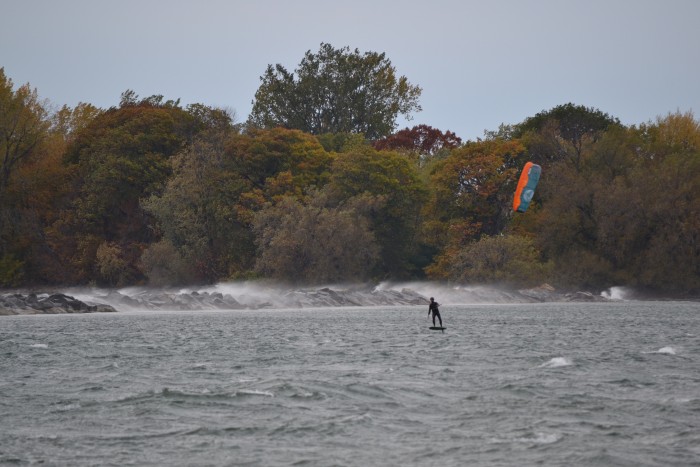 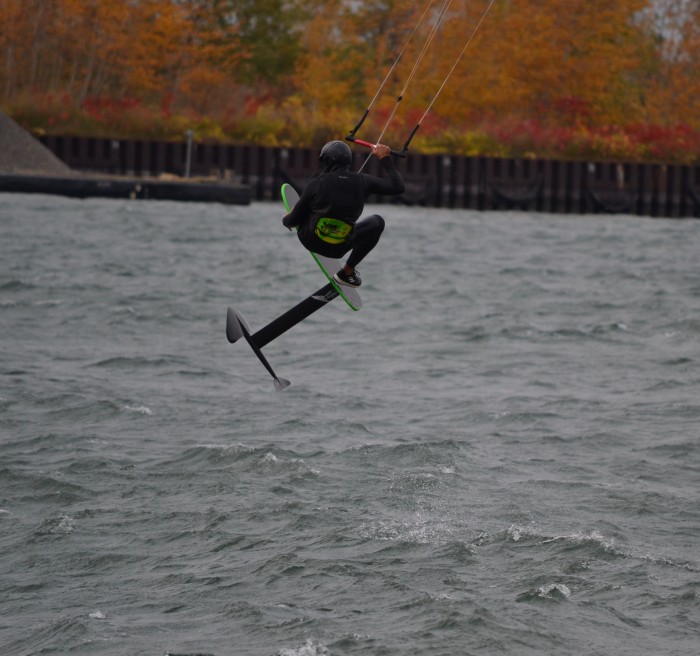