Thanks Merl! I will try to continue the foilholio tuck towards the center of the kite as a first attempt. Basically realizing the effect of the picture above as in the Flysurfer kites.

Does anyone know whether foilholio is still on the forum? Would like to send a 1-1.
Top

Amazed the merry band has yet to pick this up

merl wrote: Interesting. Foilholio's suggestion was intended to cure the "other problem",

I suggest you reread what he wrote. Let me help.


foilholio wrote: My mod has been used by me. I have used it to fix asymmetric flying, but it also affects clapping

merl wrote:which he suggested would flatten the profile.


foilholio wrote: you are individually altering the camber shape of cells.

merl wrote: A general question: what is the effect of the flysurfer PMS (?) adjusters? Is it s vertical tension adjuster too?

These alter the shape, or more specifically the camber of the cells, in the same way pleats across the width or span of the cells do.


merl wrote: was intended to cure the "other problem", but it seems it makes it worse.

Rein de Vries wrote: As the wind was rather gusty today, the other problem, was even more pronounced however.

Rein de Vries wrote: Some words about the aerodynamics about the solution is also highly appreciated, I would really like to understand why a specific shape change could resolve it.

So I am gathering the whole kite is collapsing? So collapsing is AoA turning negative. So when the tips collapse they increase drag and so the kite will sit deeper in the window. This increases the AoA of the kite and makes the rest less likely to collapse. The primary way a kite changes AoA is position in the window. So by fixing the clapping you have made the kite move more to the edge of the window and so it all can then collapse.

To alter the tow point, you primarily have your 4 lines through the bar. Otherwise you need to move the front line position back. Sometimes you can retension part of the bridles, or there is settings to move some of them. I would think on ARCs maybe the straps can do this, tilting the tip back or forward it will change the tow point.

Drag well you can have part of the kite collapse or flap or even change camber. A simple way to increase drag is to add a streamer. Remember tails on kites as kids?

Don't despair because you can recoat a kites fabric, to make it airtight again. Shoegoo dissolved in toluene or xylene sprayed onto an inflated kite.

Great further input thanks! I tried both the foilholio tuck, now over the full length of the kite and added a bridle as in PLs Chargers.

Tested both and the tucks allready fixed both issues, the clapping and the front collapse!

The bridle makes it fly even more elegant. Also giving the possibility to tune the AoA a bit further.

Altogether very happy with the result now! Thanks again for all ideas and suggestions 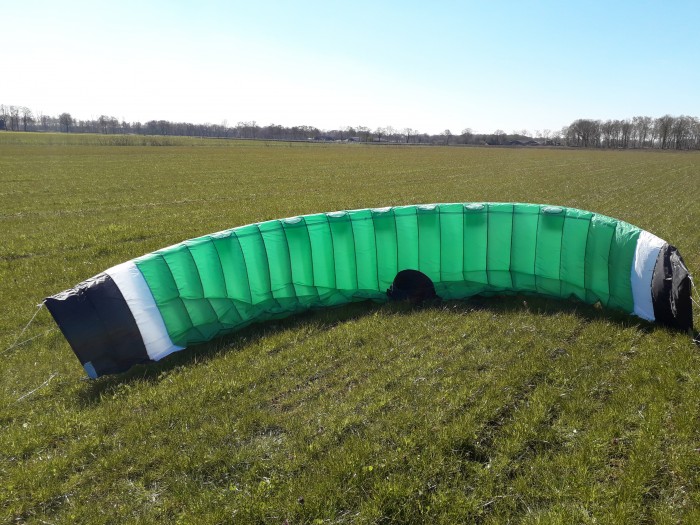 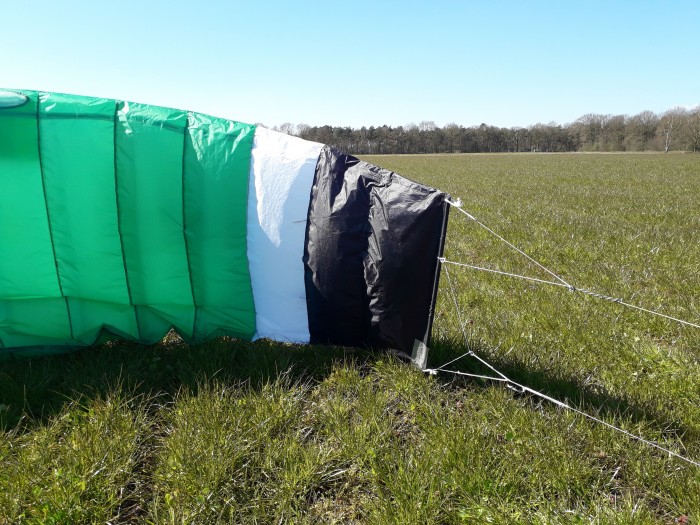 Awesome. And props to foilholio.

Did you do every cell? At mid point? Post a picture. Interested as a possible mod for an occasionally-collapsing bridled foil.
Top

Did 5 cells at both tips in the middle to get some more reflex. About 0.5-1.5 cm leading to double the cloth reduction. This fixed the clapping mostly allready.

The rest of all the cells at about 1/3 of the cord from the LE. As in Flysurfers (Soul) camber reduction mod. On these cells about 1cm, leading to 2cm cloth reduction at that part of the upper skin. This completely fixed the front collapse. I think now less would allready suffice and will experiment a bit more before I fix it. 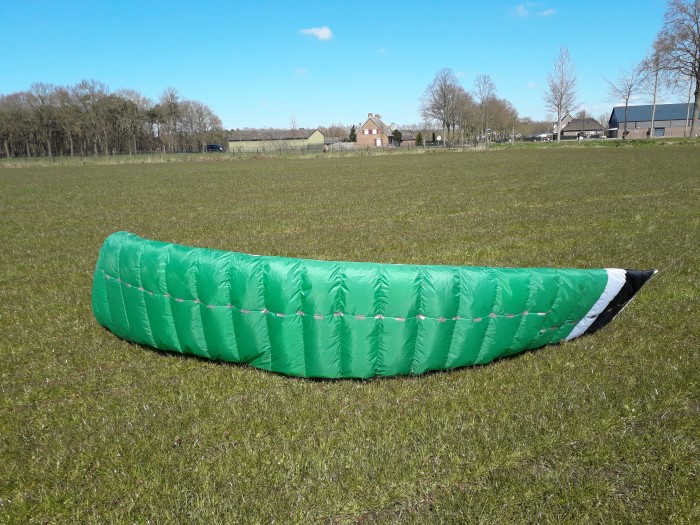 That's basically it. My experimentation is you can basically put them anywhere on the cord, though I am sure there would be some difference. Airplanes I think have things only at the rear or front of the airfoil for mechanical limits. I would start at the middle then add at 1/4 back then front etc to distribute the changes. It avoids creating too much of a hard kink in the airfoil. If this ARC like PL ones has no holes in the cell walls it can be very hard to sew them inside, as you cant reach through cell to cell to sew them. You can sew them on the outside but it makes little ridges that stick up. Or you can sew by hand on the outside like in one of the links I provided.

It sounds like someone needs to update the design for this DIY kite with some reduced camber... negative camber is probably desirable. I think on bridled foils they can use negative camber to get the A attachments much further forward and so you get more depower with more stability. There is a bit that can be designed more in foil kites, would be nice to see projected area change explored again