Light & Frost should have line lengths for the 15 meter by mid November and will publish as soon as available.

The 8 meter lengths have already been provided in this forum

Once 8 meter, 12 meter and 15 meter line lengths are known all other models can be interpolated. .

All lengths are in centimeters

Question please?
Are these 12m2 specs from Pansh or self measured?
I have this kite and have found someone who measured a new one and would like tune mine back to factory this winter.
Thanks!
You said you would post 15m2 Aurora 2, I have this

I think from factory as see Chinese?
R H
Top

Thank you very much for the chart. We have been unable to find lineplan lengths for any Pansh kites. L&F wrote the manufacturer but received no reply. Could you tell us how you found the chart?

The lengths posted for the 8 and 12 meter kites were self measured. We may have self measured lengths for the 13 meter as soon as the owner provides them.

L&F have been using Ram-air kites since 2001 mostly Flysurf. We have restored many many kites back to factory settings. With Flysurf kites the lines shrink over time and the shrinkage is not thru use. For example two(2) 7.5 meter Psycho II kites used maybe three times and stored inside both underwent line shrinkage while in storage in a container out of the sun and heat. These kites became unflyable.

The best way to restore the lengths is to add larkshead extensions to the lines. For the thin lines we use 100 pound test dacron fishing line.

Pansh kites may not undergo shrinkage as the lines are of a different material. It would be interesting to see what you find as all our Pansh kites are new.

As mentioned above L&F has no experience with line shrinkage on Aurora II kites however here is what was found with Flysurf models from Psycho I to Speed III.

First our Psycho I kites from 2001 are still functional.

For kites in the 15 meter range or greater, a trailing edge line shrinkage in the 8cm or greater usually requires a complete line audit and restoring to factory setting of ALL lines using larkshead extensions. Once done the kite has never had to undergo another line audit. Stretching the lines is not suggested as the lines quickly shrink again. For smaller kites the amount of shrinkage that can occur before the wing profile is compromised is proportionally smaller.

Currently our data shows approx 1cm per year shrinkage which for large kites slows when the lines approach 10cm.

Your kite is less then two years old hence line shrinkage should be small. A complete line audit may not be required.

Our 8 meter Aurora II kites did not fly at all when they arrived from the factory. However the excellent work of PugetSoundKiter at the below listed link solved our problems. See:

Pansh - What to check on arrival

Our kites has two distinct problems.

1. The leading edge was tucking down on one side and the kite would go into a violent spin. The suggestions provided by PugetSoundKiter solved this.

2, The tips were folding in. This was solved by insuring the center and steering lines were the same length and adjusting the depower system length.

You can reduce the drag and increase the turn rate and flying speed by removing the 5th line from the bottom center of the kite and reattaching it half way up one of the the center lines. All our Pulse I and II kites flew much better when the 5th line was moded to a center line instead. See the Flysurf Speed III line plan for details.
Top

You should try disconnecting or lengthening the tip Z bridles if you want more performance.

You should be able to calculate the bridle lengths for any size from that picture above if they are correct for their sizes.

foilholio wrote: ↑
Fri Oct 11, 2019 3:09 pm
You should try disconnecting or lengthening the tip Z bridles if you want more performance.

I will try this as still have tip tuck when kite down turn jibe foiling at the end.
Do you mind being more specific like using bridal letter and number from chart below. 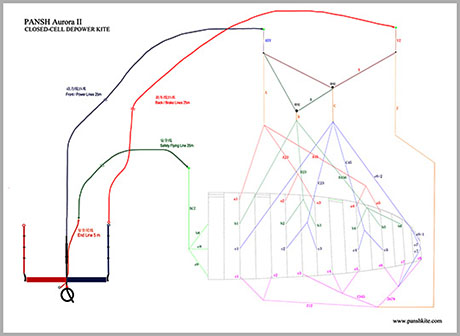 Also always wondered about the ring sliding in between two connections, why?
Merci, R H
Top

Our Tip fold problems were solved on our two(2) Aurora II kites as follows. The kites were modded as noted in the link above but the tip fold persisted

Balance the four lines so that the 4 kite lines are the same length when not attached to the bar.

Attach the four(4) lines to the bar.

With the lines under tension and the chkcken loop tight against the bar.

When the depower system is fully depowered(ie shortened), all four(4) lines are the same length when under tension.

If you shorten past this, tip fold begins to occur especially in the window. If the depower system is too long, tip fold occurs and the kite back stalls as it nears the window.

L&F is working on a Aurora II 12 meter kite for a friend as we speak and are just waiting for wind to do some final tests. If more is found will advise here. But this balancing solved our Pulse II 12 meter as well as Aurora II 8 meter kites.
Top

foilholio wrote: ↑
Fri Oct 11, 2019 3:09 pm
You should try disconnecting or lengthening the tip Z bridles if you want more performance.

I will try this as still have tip tuck when kite down turn jibe foiling at the end.
Do you mind being more specific like using bridal letter and number from chart below.
PANSHBRIDLE.jpg
Also always wondered about the ring sliding in between two connections, why?
Merci, R H 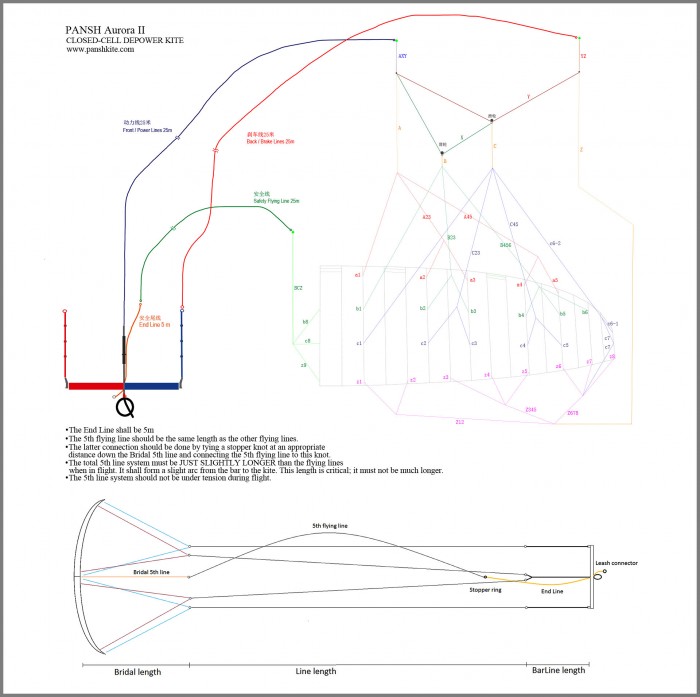 I would say adjusting Z alone would fix the tips but the line plan for the tip is quite unusual. It is known as a wing warping setup. Normally in that setup B just transitions to the A position, but on this also C transitions. It is meant to improve turning, I think also would reduce the over pulling of Z because of the tapered wing. I think you would get the strange situation of where normal B and C shrink, mainly because of the pulley lines but also themselves that that will then pull on the tips more reducing their AoA and causing them to collapse. For that extending them will offer a solution at the tip. I would always start with Z though and see how that works.

You can also alter the shape of the cells to fix collapse. By reducing camber by shortening the top of the cell, as seen with flysurfer PMAs or making pleats in the top skin across the width.

The sliding line is just another way of adding a bridle. It is used here because there is no easier way to provide the correct ratio of pull given that only C and Z are on the tip. You would have to add an entire new bridle with pulley at the mixer if you wanted it separate. Otherwise you could mod the kite to have a more traditionally line plan by re bridling the tip BC to A, though it looks like the tip B is too far back on the kite.

Thanks to the Pansh Aurora II chart provided by revhed and the line length formulas and excellent guidance from foilholio, a L&F programmer was able to write an xls program that determines the line length of any Aurora II kite from 8 meter thru 22 meter.

The program also allows the user to determine the length of any larkshead extensions required to return the kite to factory setting. When a line audit is conducted just enter the measured lengths in the appropriate block and the cutting length of the line is computed.

Due to the embedded booleans in each cell,only the cells where data needs to be entered are unprotected. However the code to unprotect the work sheet is written in clear text on the xls sheet

L&F will be happy to produce similar programs for the Aurora III kites if line plan lengths are provided.

We may write a linux version of this program in bash script in the near future.