Kites are shipping with even more user-adjustable features...

Has anyone here changed their PMA settings? 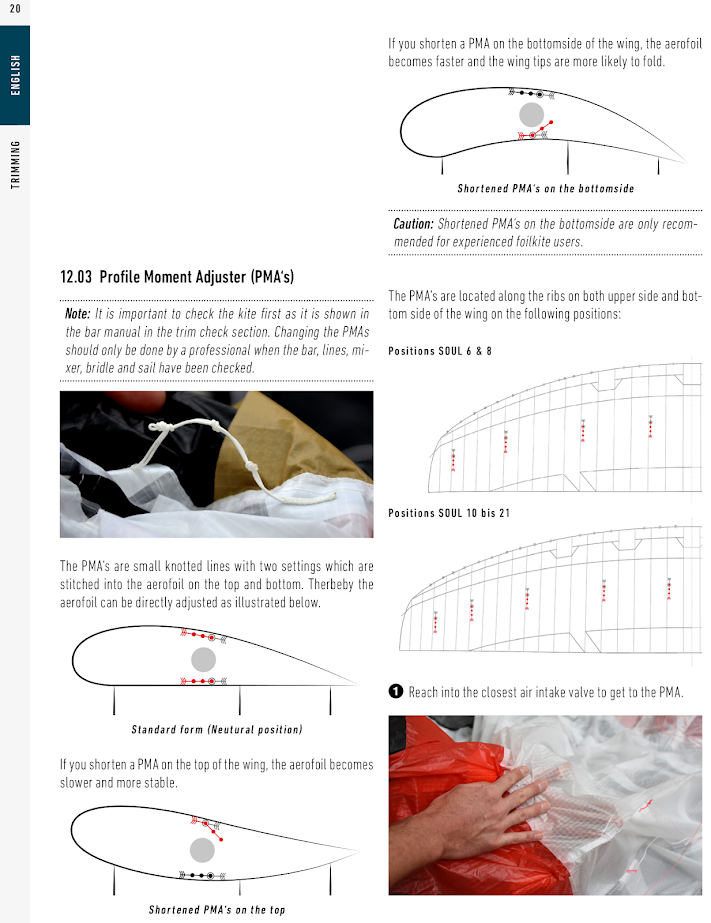 Kristan wrote: ↑
Thu Mar 21, 2019 6:21 am
I'm not gonna adjust PMA's just yet, since I don't have the knowledge of how would wing behave with certain profile. For now I'm satisfied with wing behavior after the mixer adjustments. Because in conditions that I have shown my kite would frontstall multiple times already, but nope, it's stable now and have only collapsed because of my poor handling.

You shouldn't adjust the PMA's on a knew kite unless you know what you are doing and after flying you want to tune it for a specific condition. Sould should fly OK without adjustment. I got a 15m used one (not much) and the previous owner used like 4in extensions on front line (more backstall I guess) but removed these and fly on equal lengths and so far no issue...have front collapsed only when going under kite mistimed jumped but on normal flying its so stable in fact its really boring kite....now to make things interesting I use higher aspect kite so I cannot day dream while riding..

guess good problem to have...


...or are we just gonna leave it all to the French

For wave or surf I would do the opposite and shorten the top to improve drift. Maybe an example of Armins lack of experience in that area.

You should look on the PMAs in the same way as the profile is change with the mixer, except it is for when the kite is depowered.

Drift is very good already with the balanced weight and triple depower. Shortening top skin PMA definitely produces a slower turning kite. I would only change top skin if needed to correct imbalanced flying while depowered or correct frontstall with the kite depowered.
Top

No doubt drift is good, but still kites vary in ability. Different mixer settings will also affect drift, but I think the PMAs would have more an effect. Of interest on a kite like the Psycho 4, the opposite on the tips where they have more camber and they collapse more the drift is better. The drag from collapsed tips and more compact shape seems to be what works, but the kite loses performance in other areas setup like that.
Top

I have owned a 12m soul for over a year now and it’s probably been my most used kite.
From new I never had any issues, but as time past I started to get some slight wing tip folding ( although they would flap straight back out again )

I did multiple long mixer tests that would sort the problem out temporarily and then ultimately even with a zero error long mixer test I would still get some slight tip folding.

So I decided to have a go at the PMA’s

I shortened the top PMA’s by one knot but only on the outer two PMA’s ( near the wing tips ) and hey presto absolutely no tip folding and back to being super stable .
My thought was to give it a go and if it doesn’t work put it back !