Foil can be trimmed to backstall enabling pivot or even center turn. Or by one hand sheeting make kite 'reverse' for next spot to release bar and unleash power spike.

Just shorten steering lines with the amount you like. Too much can cause collapse.

Here is Gunnar's video with hyperlink(?) to display what I mean. Looks like 540deg/s as turning rate. As Peak does not have inertia it could be very quick, however no cells could require some tuning not to collapse with too much tension.

Rear lines 2 - 3 cm shorter than fronts. Keeps full power in turns for one handed and most normal grip flying, but you can pull it back into the window or just get it to pinwheel without grabbing a rear line, which I appreciate because I don't use a swivel.


You can ride in 12 knots when average weight, but IMO not the sweetspot for a 1200 surf wing (when no waves)

If waves, of course above sweetspot is lower, no doubt

But in general conditions, no issue feeling "sweetspot" in 14 to 17 knots in my experience - you can ride it in a lot more wind without feeling powered, yes, but we were talking about the sweetspot range where you dont have to sheet out to flapping state really.

But of course, if you got waves it will be.

Maybe 14-15 knots is the perfect sweetspot for an average weight.

I got a 5m and I completely agree with that wind range sweet spot, getting started in under 12ish knots was a chore for me, not worth it for me, 13+

what do you find the 8m sweet spot? thinking I might get an 8m...
Top

A bit tangential question. I had a gusty session with 750cm2 foil, 65kg, and 4.5m LEI on a shadowed river today with wind changing direction +/- 30 degrees and big range low teens to 30s. Wind felt like it had holes and kite would jerk bump bump bump as I looped and whipped it around the window. Sometimes kite fell out of sky in lulls and so I just sat on my board and waiting until I could easily relaunch. During gusts, I could rocket back upwind race style and use momentum to transition. Was a pretty good session, felt like taming the bull and I was dialed in to my gear.

Would a Peak 4 have been better? I’m not sure. I felt safer knowing kite floats and can wait out lulls or handle gusts predictably. Maybe Peak wouldn’t have dropped. But I really didn’t want a sea anchor with current and docks, boats, and bridge pillars around.

Also I liked the LEI’s structure and inertia during very sharp lulls and gusts- able to work it dynamically, always moving, never let it park long. Much more engaging and rewarding when it worked than parking kite and mowing about.

Wind meter data from cleaner area down wind but gives and idea. 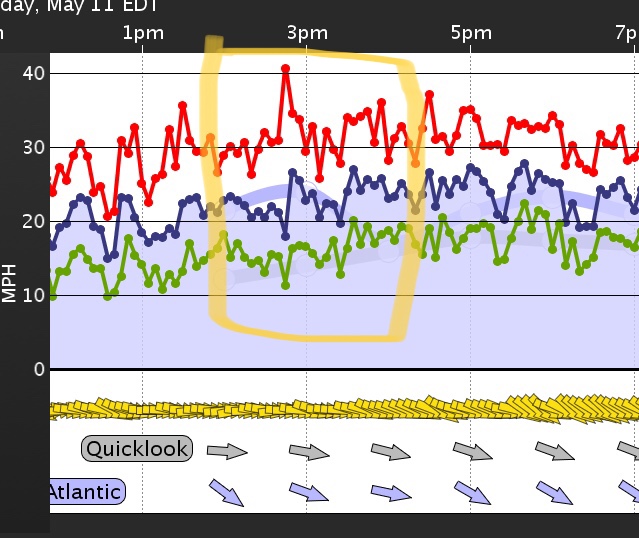 Have only had two sessions in really gusty shifty conditions with this kite and it made the riding experience much better in general. I stayed close to shore in case I had to swim. I would think it takes a lot more experience on the kite to really know the answer to your question but common sense dictates you shouldn't knowingly put yourself at risk by using a non water relaunchable kite in the wrong spot.

The OK kiteboarder has a video up that mentioned his Peak4 4m collapsing in a voodoo gust requiring him to swim in. But, he also notes the Peak4 is in general nicer to ride than most other kites in very gusty/shifty conditions.

In effect, its always going to be a calculated risk that varies for various locations/conditions/situations.

I don't think I would ever choose the Peak4 for any situation where a failure to relaunch would put me in danger. Super cold, high winds, big conditions, currents, etc.

I would more consider the Peak4 an option for less than ideal wind conditions in situations where I can remain close to shore, and in conditions I feel safe swimming in.

I certainly think we always need to be prepared and accept that wind can do all manner of unexpected things. A kite that relies on some line tension to maintain shape and is not water relaunchable is a real risk in many situations.

Peak4 is a great kite, but its not meant to be the only kite in a water kiters quiver.

Brand Affiliation: None
Has thanked: 1 time
Been thanked: 17 times

Jyoder - I am not a highly skilled pilot such as others here, but I do fly my Peak4 5m in some of the crappiest wind around. And I agree with jumptheshark 100%...the Peak is not magic so assume it WILL go down and won't relaunch !

It does handle our winds here better than other kites, but it still gets knocked out of the sky. Happens so fast having a hard time understanding it...but I think a direction change in the wind during gusting causes a collapse and then slack lines and it just falls from sky. So far, I have not learned how to save it. This happens when slowly body dragging out so can't change direction and take up line slack like I do on the landboard. Its light weight and low inertia may be a liability in this case, as it can't coast through a wind shift/vortex/black hole/whatever is up there.

And yes, it WILL sink. My relaunch on water is 0%...usually collapses and falls down at edge of window, in a ball or in the least folded on itself. I lack skills, so no joy on relaunch. Maybe I need to immediately swim and get upwind of it? In any event, if in water to long it eventually will get underwater, especially if tension on lines.

None of this is a problem for me, small lake no dangers. and it is WAY better than my LEI on handling our lake's wind challenges. If I lived by an ocean...wow I don't know if I'd fly my Peak in challenging conditions where if the kite is down I got serious problems.

Using my WaveXL (790 cm2) windranges are not that much different, because of more apparent wind power as one rides faster, also in jibes.
Low end, below above sweetspots, are higher with the smaller wing though..

Windrange are somewhat higher than these mentioned, have been riding the 5 m2 in more than 20 knots easily, and lulls at 11-12 knots same session, so when wind is very changing it can still be used.

If you rarely have waves Regis, I assume they are wind waves, thus a 4 m2 might be a good size?

Dont know if this helps, as I dont have as much experience as tomtom and drsurf, but might give an idea

Interesting question. Certainly tricky conditions for the one kite you rig.
My small quiver currently is 4m Peak4, 5m Peak4 and your cloud 5.5. Thank you for selling me the cloud. Opened my eyes to a new world of kites for a foiling world. After about 20 days on the Cloud, I got the 4m to go under the cloud 5.5. I am not sure I went small enough. They have a lot of overlap.
I am 85kg/190 Lb, 633 foil (1250 cm^2).

I would have rigged the 4m Peak4 for those conditions. I consider it a 15 mph w/gusts to 25 mph kite. Like the cloud, I don't worry about it falling out of the sky in the lulls. It stays up in the lulls, perhaps even more than the clouds. Pointing up wind, loading the kite and sending it forward in the window helps in the gusts and avoiding flapping. Recently, I had a forecasted 15-25 day that turned into the 25-35 day. I was on the Peak4 4m. It was hard to point enough upwind. I would have liked a 3m. In some ways, that seems like your day. Do you rig for the lulls or the gusts? The Peaks handle the lulls better than any other kite I have flown. It feels like a 2 line, 2 meter trainer kite floating in light wind navigating the entry/exit to the launch, so I would not worry about being around boats/docks.

A Peak, like a cloud, is a play kite. You spin it, loop it, zing it across the window to get power to get up and go through the lulls. Only in big gusts do you park the kite and "edge" the foil upwind to avoid flapping.

For changing inland lake midwest conditions, Peaks are amazing. The catch, you need a couple different sizes to handle the wide range of conditions that we get. I have never in 16 years of kiting intentionally spaced my quiver with a 1m step. At the same time, I think I made the right choice.

Would just translate wheats ranges, as mph is not a unit many knows about, as not used for windspeed in sailing terms:

I got the 4 m2 and the 8 m2 yesterday, and had the chance to ride the 8 in its very lower limit, and a few puffs where in its sweetspot too.

Only used the 8 and 11 one time each, so not much experience in their ranges.

One thing is for certain though, it is the 3 and 4 and 5 m2 that really rocks, they can zip around fast and have loads of powerspike because of this.

Whereas the 8 and 11 are of course light and hangs well indeed, easy to pack down, but as such they are nothing special, compared to other kites, as they turn just as slow, and has no significant power spike.

Good because they cost half of other kites, and can hang in less wind - but other foilkites or one and nostrut tubes can probably give at least the same in terms of kitefoiling

Dont know for sure yet, but seems this way, in fact exactly as tomtom has said from the beginning

3-4-5 m2 are amazing fun kites, and in waves maybe the superior ones out there