Do Peak4 kites work with waveboards?

More similar than difference. I’m not a fan of the big ones in either but some seem to like them a lot. Small ones have super drift and fun stunt kiting.
Top

Myself and Stef I believe are the only full surf (non foil) oriented riders that purely use foil kites, since foilolio has departed. But I wish so bad to try a Peak for full DTL wave riding in side on conditions. I am mostly interested in the larger sizes like the 11 and 13 to see if they might be the key to light wind drift.
Problem is...
I just can't get myself to buy one purely to try it in experiment.

So.... Armin if your listening.... I'll send it back after a session! Just let me try one!
Top

Ive ridden 3,4,5m Peak on surf hydro and surfboard only. I have ca. vanguard SB - fast low rocker board.
Upwind is so. so. but possible. For downwind down wave i found out rest pull too much. I.e fully depowered peak still pull enough to disturb my kiteless feeling.
On HF this is not problem because smaller kite have less restpull and HF have much less resistance so there is more perceived kiteless feeling. On bigger faster waves i suppose it can be kiteless on SB too.

So Peak can be best tool for downwinder on big or fast waves. On everything other i will choose another kite. Still im using it occasionally on SB because i dont want 2 quivers.

I love my Peak 5m with a surfboard. Disclaimer - I never ride a surfboard upwind or even triangles - dw only.

I’ve not pumped up an LEI since I got the Peak actually.
Top

I've used the 8m once with my surfboard, thought that'd be easier to finish the session like that than packing and launching the 5m. It was probably a good 16-18kts, and foiling was getting too much. On a surfboard, it felt actually very good riding the waves downwind, kite happily following downwind, unobtrusive and staying responsive anywhere in the window. But apart from that, every other part of the ride was feeling kind of shit. Feeling some power, yet badly struggling to keep my ground. It just felt like the power delivery was not right, and the steering was feeling also quite big kite heavy. Played with the trim for a while but without improvement. So yeah, if you have the luxury of never having to ride upwind, they work great (and you don't have to stash a pump somewhere).
I assume it gets better with smaller sizes in stronger winds, but as far as I'm concerned, the 8 was pretty terrible on that front and not really motivating to reiterate the experience, and I much rather use a 12m single strut for the few days with waves and not enough for a 9. I love it on foil and snowkite, and on land, but too much drag seems to totally kill it.
Top

Not that many responses here, but thanks to those who did

Yesterday I was going out myself with tubes, 6-7 m2 wind (22-25 knots of wind I think), but eventhough late and after work, I thought: Let me try with the 5 m2 Peak4 first

What a horrible experience....

Kite was pretty much at its sweetspot for waveboards, eventhough I had to make an extra knot to shorten the rearlines, as just like with tubes, the trim setting is a lot different whether on a foilboard or a waveboard.

Riding Down The Line was great, felt soooo much more free, could stay high on the wave if I wanted to, easy, just surf along DTL, or make powered high speed lay down bottom turns, if I wanted to (the last is the only option almost, with tubes)

A high level of freedom added with this kite.

After an hour, I rode back upwind to the starting point.
This is a spot where the waves are best half a mile or a mile downwind, but had no idea how bad it was, as on ALL classic waveboards upwind is tiresome, compared to foiling ha haa (but no foiling today).

Okay, wind might have picked up a tad, dont know, but took my 6 m2 tube out now to compare, also at its sweetspot, and rode a new session downwind and back again later.

The experience was extreme...
Could do the "wellprepared" turns, where you initiate the kite a tad before and know which line you are gonna take on the wave.
But the freedom, being able to ride close to the wave, and just let the kite follow, or depower or power instantly, was totally gone with the tube

Also, it kept pulling when it flew across or you rode straight out, might be great for beginners with no sense of sheeting, but felt so horrible when riding a wave.
Almost like the worst nightmare: Being strapped onto an 18 m2 Dyno kite

Felt like a cable park, it just pulled most of the time it flew, and accelerated slow because of its weight, yiaks!


Okay, have ridden these kite types for the last 20 years, most of the time in waves, so got into my "old" rhytm again, but suddenly I could see how limited I was with a tube, especially in these smaller/medium waves where kite reaction and drift are key for fun DTL.

I also discovered the difference in peak power, and why we dont agree in the other thread Flysurfer Peak4 in 5 m2 about this.

When the tube was looped, it had huge powerspike at the bottom of the loop, I think more than the Peak maybe, where the weight of the kite helps it to max acceleration, no doubt.
But when looped "up" again, it lost this peak totally.
Where the Peak4 has this peak spike both flown up and down or looped all the way around.
Meaning the very peak power is maybe not higher, but it lasts longer, and more importantly, it can be delivered on demand no matter where the Peak is in the window, and this is the very reason I can start earlier with the Peak4 than a tube, especially in light wind where difference is huge.

Also, the delay in reaction on the tube is extreme, compared to the Peak4 (it was same lines 21 m on both), which makes it even worse for "peak on demand".

For this downloop tube peak power to be effective, you need longer lines when on a foilboard, as you downloop and important the pull is "upwards" for abitlity to start in the lower end of the windrange.
Whereas for the Peak4 it does not matter as much with the linelengths, because it accelerates just a good and peaking, when flown up or right or left

When I went ashore, there was one annoying thing with the Peak in 25 knots: I had to push the bar out, or depower the trim, for walking easy on the quite long walk back over the sandbanks - this meant it was flapping like crazy, and just sounds wrong and felt odd here.
Out riding there was no flapping as it was at its sweetspot most of the time, and when riding DTL depowered it was drifting thus not flapping hard in the wind.
This was probably the only "not as lovely" thing about it.


I had a GPS on me, and anaylized the tracks afterwards.

I was on the same waveboard, both kites at their sweetspots, and the upwind angles, and also polar diagrams was exactly the same, apart from tighter wave turns with the Peak4

Felt very different in every way, and impossible for me to feel how good/bad the upwind was, but was astonished to see it was the very same.

Have seen the same several times now when on a foil, that upwind is the very same as a normal tube kite (similar power, not size).


The Peak4 is responsive and has instant power or depower, which gives massive freedom - but of course requires a good rider/flyer but it comes pretty fast.
The tube is dead and slow and pulls like a truck all the time, also when you dont want it to (like on a wave), but supereasy to ride with just going straight, like cablepark power.

When getting used to the tubes again, it might be okay, but this very first day, at ideal conditions at their sweetspots both of them, and typical medium wavekite sizes, it was like night and day, only the "walk back to or out from the beach" flapping was annoying in this much wind, apart from that only huge advantages

For freestyle a tube is perfect, as all the wave downsides are good for this kind of riding ha haa, odd but true.

Milking a small wave all the way till it dumps at the sandbank, last cutback 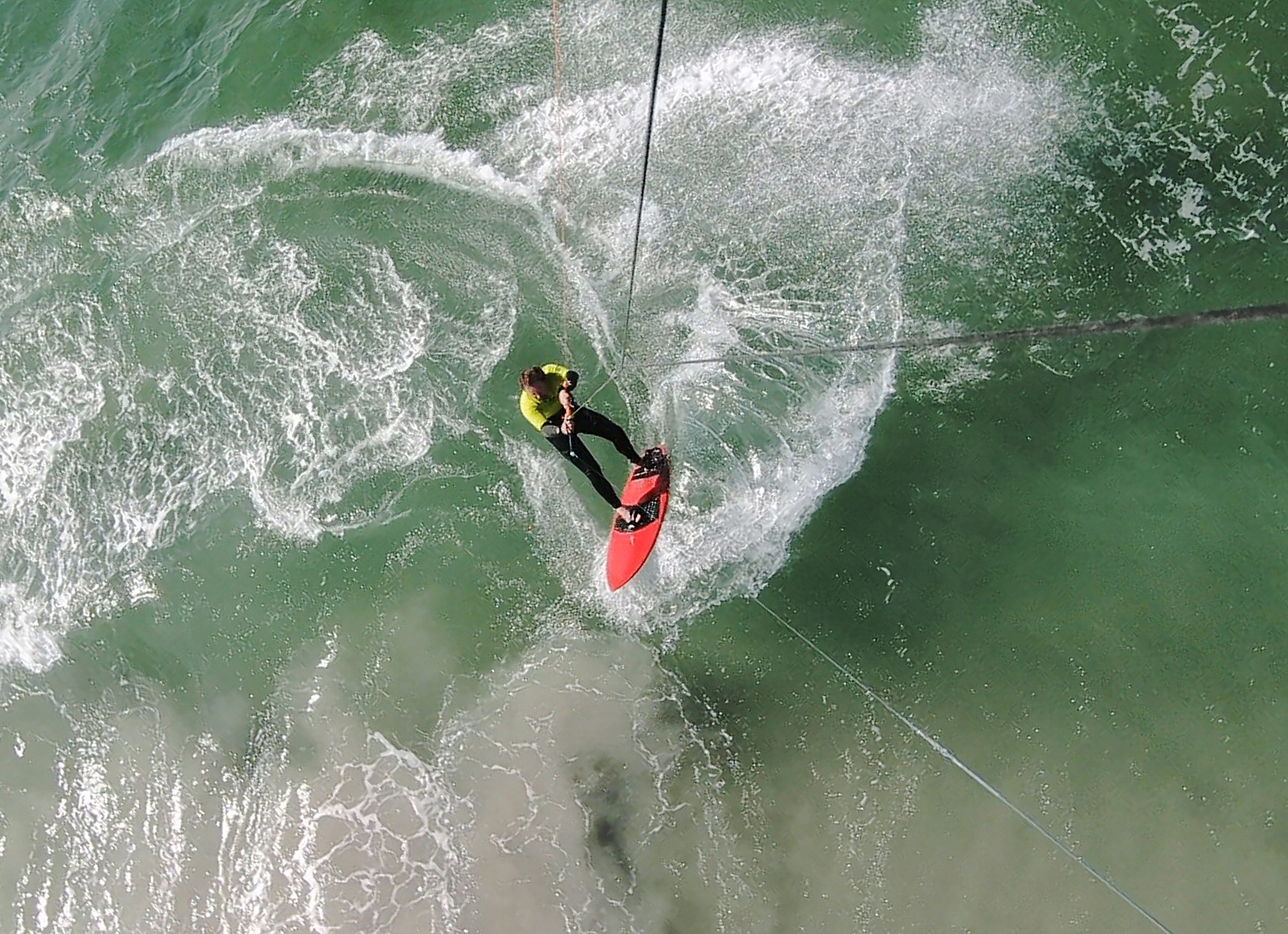 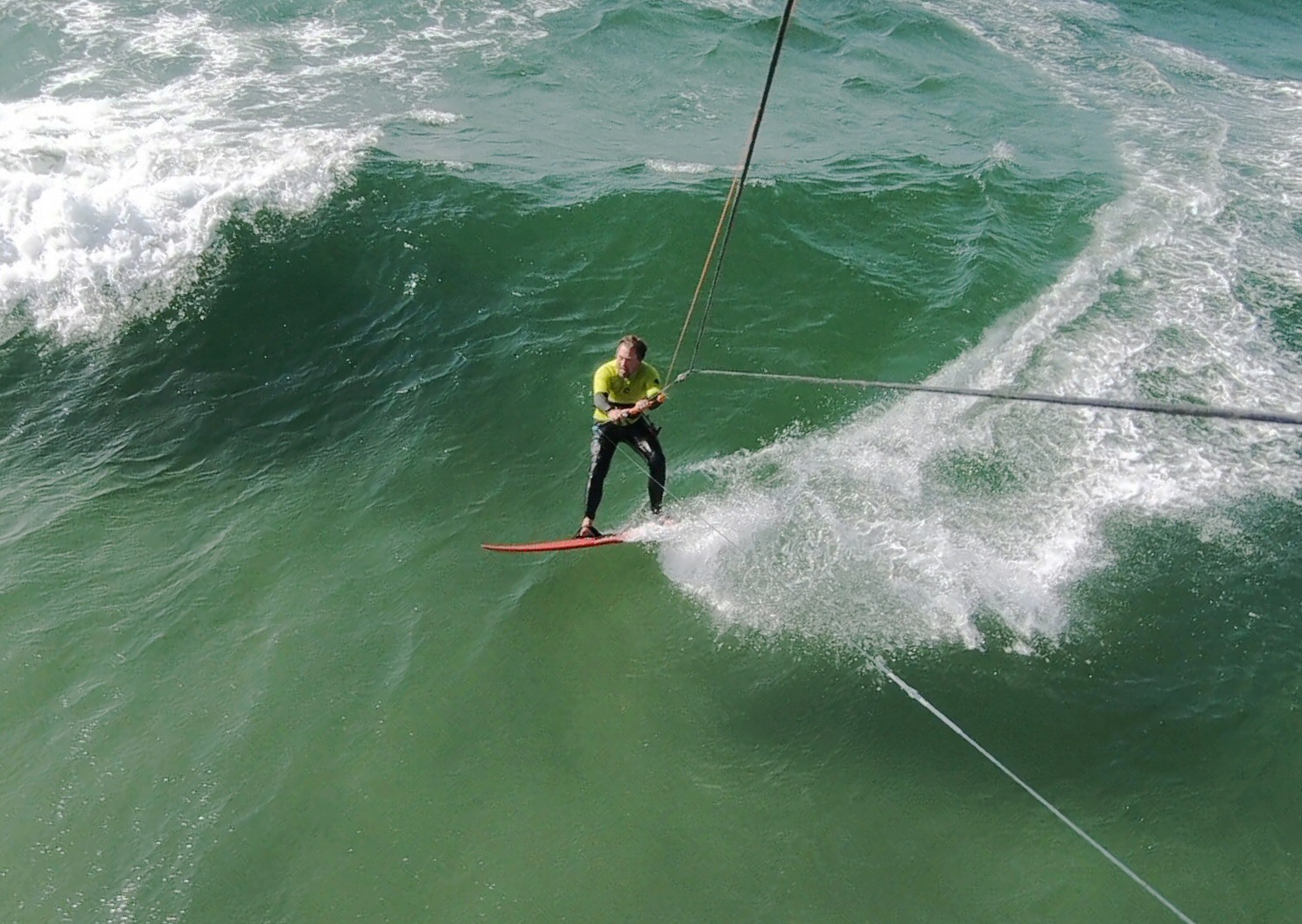 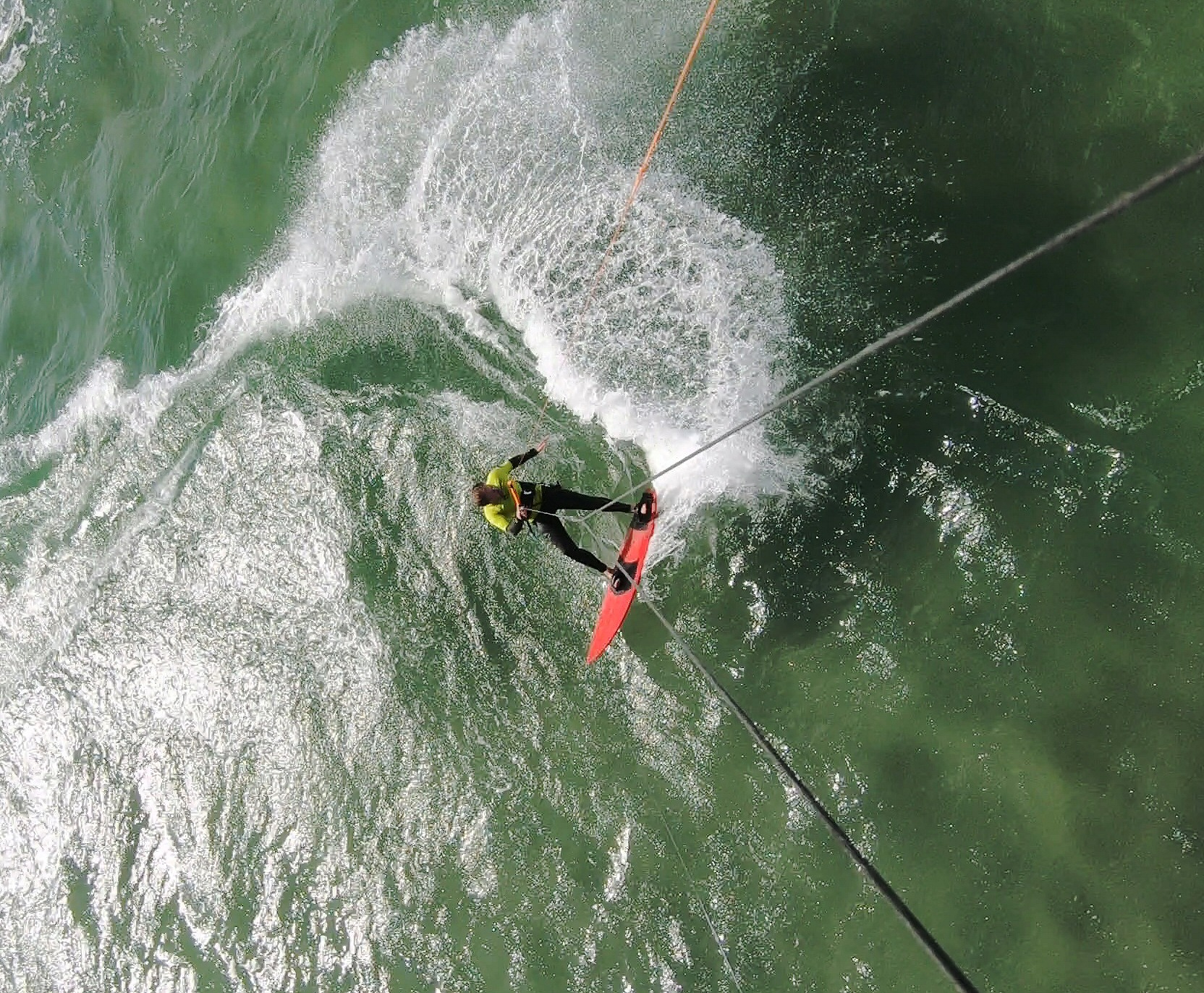 I noticed one thing, when launched in this much wind, the tips took a looong time to fill out as the wind blocked them a bit longer, the classic "hanging with the ears" like all race foil kites when launched.
This does not happen in lower foil winds, where it fills up immediately.
The reason is, the only part of the Peak which are not fully "really open cell" is the tips, they get inflated and this is the very reason why the tips dont flap when flown and turned, like on earlier open cell kites - great
The tips stay firm, good design ! 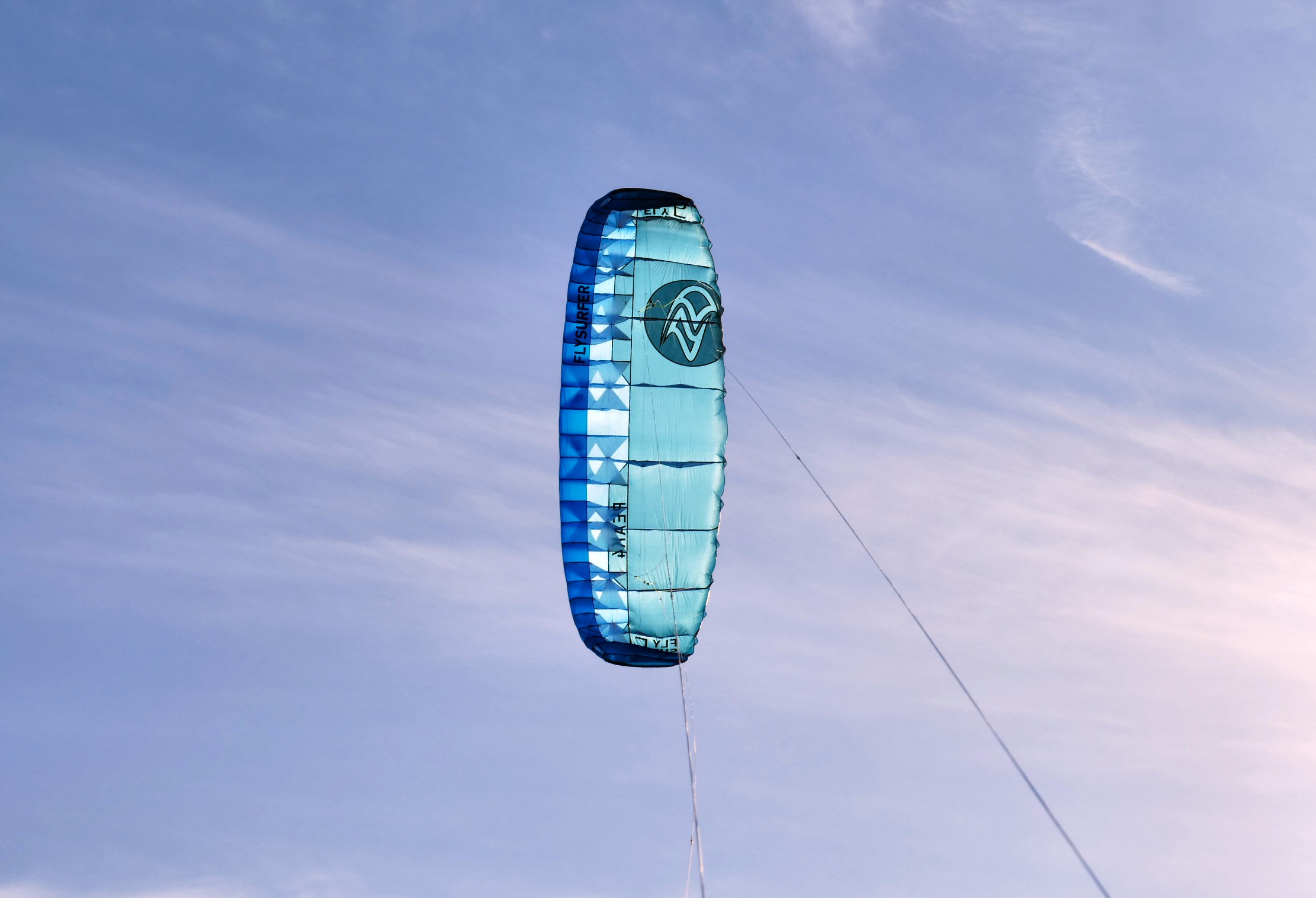 So the horrible experience was not the Peak kite, but how bad my otherwise loved tube felt after this !!!

Not saying "Never tubes anymore", as it was the first day, and it might be different when both kitetypes are a bit outside their sweetspots, but AT the sweetspot there are huge advantages with the Peak4 it seems c",)

Thanks for sharing the stoke! Single skin kites are most interesting kite design area right now. Development is clearly not over. Very interesting notes about perceived vs GPS upwind.
Keep eye on bsafe cross line - you will start to see it deforming tips. Or not - maybe this kite really need high Y pinching force for structural integrity. My kites are flown exclusively on low V.
Top

So are you saying the Peter Frank universe has no longer has any place in it for tube kites?

It has to be said, while keeping a single skin foil out of the water while kite foiling seems pretty realistic, it seems like it would be a bit more problematic when wave riding more aggressively with a SB. Even though dropping the kite in waves doesn't happen that often ... it does happen: dipping the kite too close to the water while bottom turning, misjudging the wave breaking & getting washed towards the kite & losing line tension etc. These are likely to be session ending events with a Peak4, I imagine.
Top

Not a Peak, but I tried my 12m Marabou with a strapless SB once last summer. No issue getting upwind, better low end than the kite it replaced (17m Blade Fatlady), and it drifted better of course.
Top