I'm interested to know the technical reason why fixed bridle kites (such as Flexifoil Blade) can be so much more powerful than depowerable foil kites of the same size.

I assume that's it's because the depower kites need to be designed with a less powerful aerofoil shape (I.e. a thinner profile) , but I'm interested to know why?
Top

Stability. Depowerable kite has to be able to fly in much lower AoA's for depower. This needs quite different airfoil shape (=canopy shape in general) than what is used in a power kite like Blade.

In the old days we tried to add mixers to fixed bridle kites. It didn't take long to understand it is not possible: depower achieved was small and kite front collapsed immediately when bar was pushed out a bit more.

I am generally reluctant to disagree with a person who refers to himself or herself as an expert , but I can say with absolute certainty that a depower Flexifoil Blade can tolerate very low AOA without collapsing. I’ve flown depower Blades for many years and they are extremely stable with huge depower. A mixer on a formerly fixed bridle open cell kite can be well tolerated even at very low AOA because if the kite does surge toward the edge of the wind window, the efficiency (L/D) is impaired by decreased pressure within the cells and the kite drifts back in the window rather than overfly or “front stall” as people like to say.

In my experience, changing a fixed bridle open cell kite like a Blade into a depower kite with a mixer definitely removes a bit of the low end performance and I think it is because turning the kite involves slowing down one side of the kite (by increasing AOA) while speeding up the other side (by decreasing AOA). It’s as if both sides of the kite are compromised in their ability to deliver optimal power when compared to an optimized (on both sides) fixed bridle kite. Flying the Blade as it was designed delivers amazingly solid power throughout the turns but it’s a very physical ride. A depower Blade is very comfortable.

I’ll agree with the expert when it comes to adding depower mixers to closed cell fixed bridle kites (such as the old Windtools Mosquito Pro or Peter Lynn Waterfoils). These closed cell kites had very low tolerance for reduced AOA and some sponsored riders adjusted their bridles to increase AOA to avoid frontal collapses, particularly when flying them as 2 line kites. By the way, those fixed bridle closed cell kites had amazing power. I’m sure someone here has flown a 3.6 Waterfoil or a 9.4 Mosquito.

My guess is that the expert made his or her statement based on experience with closed cell foils and not with open cell foils. There is a huge difference between the two when it comes to tolerating low AOA, and it takes some very technical work to add stability to a low AOA closed cell foil.

Maybe someone who knows a bit about “tip reflex” or other stabilizing features of closed cell depower foils flying at low AOA could weigh in on this if it is relevant.
Top

My 2 cents, based on closed cell kites experience, fixed briddles or not.

Indeed fixed briddles is more powerfull while shape differences are not that obvious, visually at least. To me it is a camber matter: fixed briddles kite are far more cambered, for two reasons:

- on a fixe kite, you use the rear lines as a break, that will stalls the kite or one side of the kite to turn. Therefore it is designed to have its maximum power with few or no rear line tension : therefore the AoA when sheet-out is (by design of briwdle lengths) already high, and become "even higher" when you sheet in, leading to kite stall when you sheet in (often). So, higher AoA , higher pull overall, or at least 0 depower ...never.

- due to this "always high" AoA you have less risk of fronstall (when the winds pushed the extrado downward), so you can put more camber without collapse risk (hence provide more power thanks to camber increase again).

So more power because of higher camber and max AoA even when sheet out.

Now it is possible to turn some fixed kites into depower one.

I did it on a Pansh Adam (i.e. similar to Genesis now but it was not wevelopped at that time) and now it is a good depower kite for trainer and tested on a hydrofloil. When setting the speed system to make it depowerable, Adam was collpasing as soon as i sheet-out ... I had to shorten B and C to reduce it camber (drastically, almost 10 cm on a 5.5 m2 ), now it is similar a a depower kite (i kept more camber that overall depower kite as I like the power it gives.


Brand Affiliation: None
Has thanked: 196 times
Been thanked: 279 times

I don’t think there’s a good reason to convert fixed bridle kites into depower, besides just curiosity and abundance of free time maybe. It’s not like anyone has to justify conversion by cost anymore.

With foiling done on 2.2+ meter sizes nowadays it might be a cool try to ride a fixed bridle kite on fixed chickenloop/unhooked. Worth a video at least
Top

the flexifoil blade , 1 , 2 and 3 are amazing kites , and very powerfull and amazing to jump with -i fly mine with a roller and a work harness(the best way) very touchy feely and i have quite a collection , when the 4 came out i lost interest ,still a good kite but not raw like the first 3

there will never be a fixed bridle that can compare to the early blades , the 1's are good to ride and jump with -
the 2's are very fast and fantastic to ride and jump with , great jumping machines
the 3's are fantastic to jump with all the way from the 3metre to the 10.5 and the 3's had unbelievable glide something the 4 lost - i would n't fly blades without a harness , its a quick way to get tennis elbow , and you wouldn't be able to hang on after 10 minutes if its windy but with a harness just lean back and enjoy the power

check out "graviyty renegades" to see blade action ,extreme buggy jumping with blade 2 and 3's, and be amazed
Top

I don't have experience of all Blade kites but I had/tested it and other fixed bridle kites. I just lost my interest for that kind of primitive kites when depowerable kites came.

I had Blade airfoil file (probably Blade3) so I know exactly the shape of it. It was unstable high camber airfoil, quite different to modern airfoils in depowerable kites.

If you want to waste 100 hours of your time and worth $200 materials just make a depowerable kite with a Blade airfoil. Even better make it especially thin and "efficient"

I can guarantee the result.
Top

yea leave it for what it was designed for , handles ,with a roller and that instant very direct feel - rob hills and mark everitt were the first buggy flyers that got airbourne , ever in the world and it happened at my local brancaster beach norfolk and it happened around 2000ish possibly earlier and it was blade1 and blade2, and then blade3 came out 2003 and it was rob hills and mark everitt who were the main 2 testing , and andy preston was heavily involved also in the field so to speak
.....for early days blade3 buggy jumping , check out "gravity renegades" video ,and i learnt to fly on my landboard watching them buggy jumpers - lewis wilby -the best landboarder in the world , turned up flying blade3's about that time aged 15, but i could never get close to what he could do , lewis was making moves ,tricks up as he went along -he needed somebody with a book watching "what do you wanner call that one lewis"

chris cathrop was the main one to fly the big blade 3's on a depower system in the early days , and kite surfed alot with that setup , i have a blade depower system/bridle but have never used it , but i hang on to it , i have a brand new never used blade2 crossover bar setup too ,but i not keen on blades on a bar
the kite reaction and feel is so much better on handles on a roller harness setup-never tried depower on a blade - i once saw mark everitt kitesurfing with a blade3 4.9 with a roller harness and handles like me ,and he was going great guns amazing well,very fast and very stable , and he wasn't a kitesurfer , so i can see the attraction for chris cathrop , big blade3's on a depower set up , blade 2's and blade 3's never let off and you can use that to good advantage when you know how to handle them , i love my start off with blades on handles , on my landboard ,throw it down and across , chuck my full weight back and low as the power comes in , and if i get more power than i was expecting i'll throw my feet up too and land sliding and rolling into a big power slide start , and that is how i ride on sand low and leant back , but i can't hold back and release on the sand like you guys can in the water

but with a open ram air fixed bridle blade , drop it in the water and it will fill up quicker than you can say , bugger

grigorib wrote: ↑
Tue Jun 23, 2020 4:26 pm
I don’t think there’s a good reason to convert fixed bridle kites into depower, besides just curiosity and abundance of free time maybe. It’s not like anyone has to justify conversion by cost anymore.

I agree. A while ago I converted my ancient 7m FB Ace to Depower 4:2:1 by copying a Flysurfer Speed3 mixer and adding adjustable A, B, C, Z Mains. Tuned it to about the max performance of the FB Ace when sheeted out, and much more stable and less power when depowered. Setup was very sensitive to adjusting the mains. The FB Ace (referred to as the widow-maker on other/old forums) is not stable at the edge of the window, needs constant brake tension which makes it pull hard most of the time. I was going to add WAC lines to limit the lower AOA to see if I could make it fully stable/trustworthy. I've got the curiosity but don't seem to have the abundance of free time... 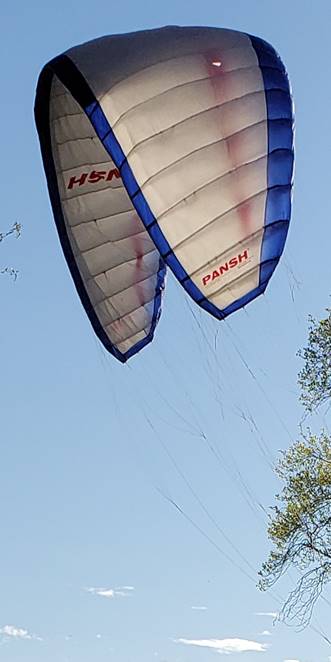 p.s. Loco4viento that 10m Speed1 with the 1.5 mod started my curiosity on mixers, bridles, and other foil kite mods