Or was it only the "Pro" line that was 9 m2?
And what was the difference?

Happy days back then

And also the time when you learned to drag cross things and hedges and stuff, on the shore - as depower was not present on these two liners (at first), and you could not release to one line as then it would loop powered

It had a critical angle with the trim, as it would fly forward and collapse quite easy, so one had to trim it "perfect" with the A-B-C lines, not easy.
And if trimmed too deep it would not go upwind.

But again, it was our very first kites here, used before the Wipikas and Naish AR 3.5 that came here later, so from 1998 and a few years, they were THE kites we used, and also outperforming the later 2 line Wipikas and Naish's.
When the latter became 4 line kites, it was a major game changer, and we all jumped on these now - and only one year later, the first frontline flyer came, the Wipika Airblast, and this style has dominated ever since, even the "bow" kites (bridled kites) today, works the same way.


But with the Mosquitos you learned two things:

How to hold an edge, on directionals, TT's were not invented, and how to be calm when you got dragged across things on the shore

A few old pics from before 2000, an almost world champ in windsurfing, Thorkil Kristensen, out on the 9 m2 Mosquito Pro here (he still rides, windsurf and windfoil 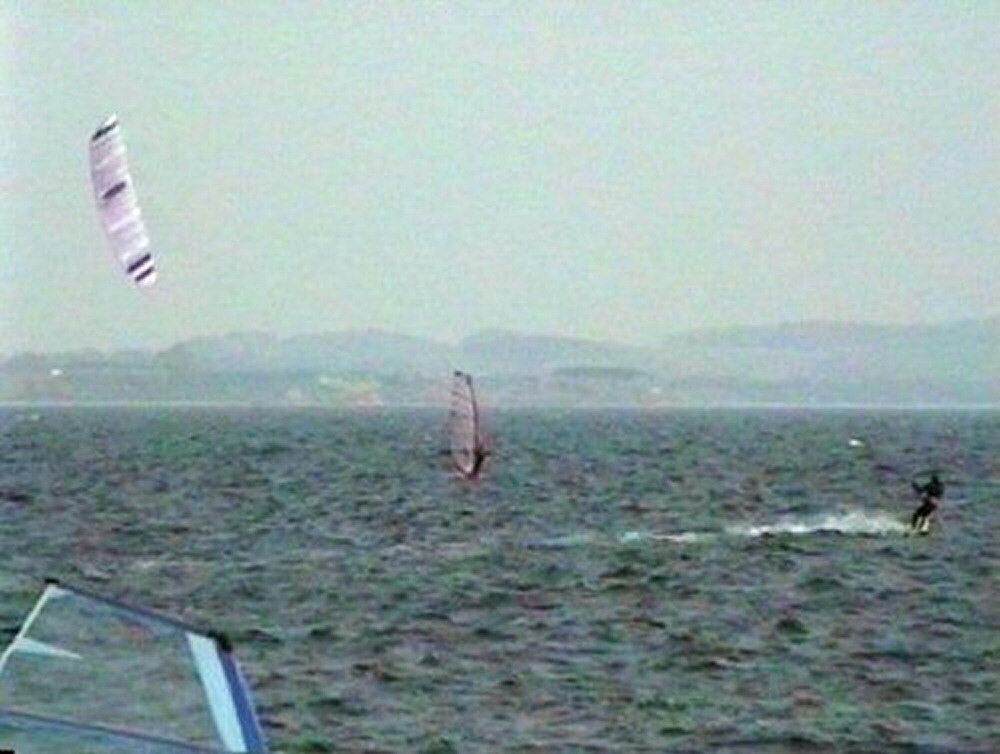 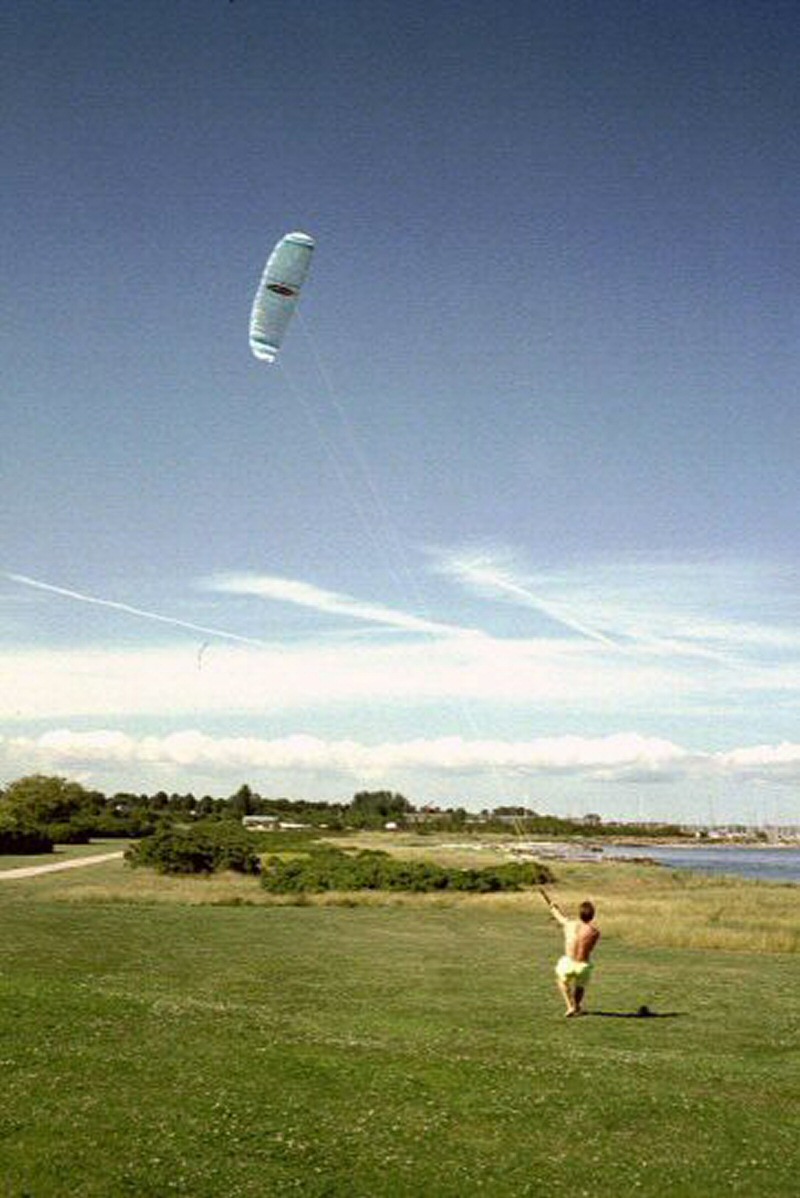 And a winterday on the water 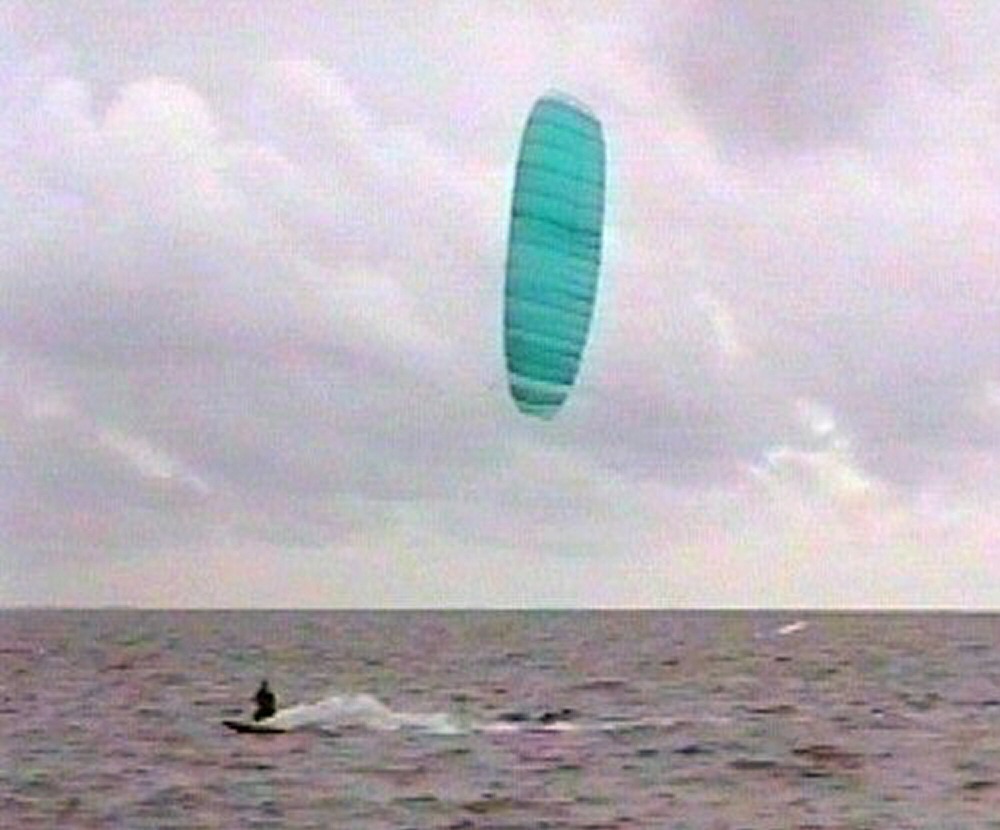 I have the 9m marabou.
In lake conditions with 12 to 15 knots your close to be overpowered.
If your drop your kite it will want to auto relaunch - it’s that easy.
Reverse launch is very fast with minimal input from your end.
I use it with a foil and surf. It won’t go up wind as fast as a delta LEI but it stay in the air no matter your low end.
The kite is very powerful, more than what I was expecting.

It’s a great kite for your Low end foil session and any snow session.
I was hesitating between a Peak and for sure I don’t have any regrets.

I haven’t used the 6m but on foil I see it being use between 15knots and up...

when i first started going to brancaster beach kiting in 2003 as i rounded the corner of the golf house going on to the beach , i'd get a long view of the beach and i'd see the buggies flying tro the air in the distance (gravity renegades) check the video out and that sight met me every week as i walked down the beach and it used to really wind me up for a good landboading session ,i soon dumped my bullets and got blades

memories in the corners of my mind
Top

I proposed the idea of an inflatable LE for paraglider foils on some forum many years ago after watching one too many near death wing collapse videos. Although I suspect that subsequent improvements in design of such a wing might ultimately end up looking exactly like a tube kite.
Top

Was using the land version of the Mosquito Pro foils in the buggy for a couple years when I started kitesurfing. Learned on the 5.5 and 4m, with quad handles. Only had to swim once or twice.

I recently sold the 9m and 12m Marabous. Just too much grunt and not enough speed for the foil, but they were fine for the surfboard. I can use the 6m Marabou in winds above 11mph, 4m in winds above 15mph. Really fun kite to fly on short lines, propeller like spins. The Marabous have a smaller wind range though. Modern dual skin foil kites have such range compared to them.
Top

The kitesurf version of the biggest mossie was the Windtools Mosquito Pro KS 9+ (which was a 9.4m2 closed cell version of their land kite and had condoms for intake valves as well as inflated “potato chip bags” for floatation in a number of cells). It was quite a beast, with huge light wind power, an easy tendency to overfly if not actively flown, easy relaunch and a built in teaching program in how to get dragged around. Those that flew the MP KS kites as two line kites generally put a couple figure 8 knots in each of the C lines and a single figure 8 in the B’s so that the kites wouldn’t overfly when the brake lines were removed. For their time I thought they were pretty fantastic kites and I loved my 9.4 and 5.5. I flew them 4 line on bars, with handles and a strop, with handles and a backstrap, and 2 line on a bar. I also loved the depower kites that appeared shortly after the MP KS kites.

I’ve wondered about the possibility of putting a Windtools potato chip type of bag (low pressure high volume) into the tip cells of a Peak 4 although I haven’t yet had the need for such a modification. It could make relaunch easier and could make sinking nearly impossible, although there are obvious downsides to consider as well. I may try it someday if my curiosity and free time manage to outweigh my laziness and my love for the way my peaks fly right now.
Top

Here a video of our Horst Sergio flying the Mosquito 7.5

I love the usable wind range of 6.5-7 !-) So true. Had the 5.5 for quite a while and pulled the 9 up only a few times and got too scared to even hit the water. Bought Flysurferkite Speedair prototype in 9 instead which even had something like a depower function.

But the Mosquito used the bags only for floatation and not for stability of the air frame as in a tube kite (perpendicular oriented).

I owned the land based version of the Mosquito Pro, 7.5, 5.5 and the 2m and used them for buggying.
They were beautifully constructed and offered superb up wind performance.
I saw a guy one day learning to kitesurf with the KS version, however the kite spent most of the time in the water which I put down to user error.
Top

RedSky wrote: ↑
Thu Dec 31, 2020 2:26 am
I proposed the idea of an inflatable LE for paraglider foils on some forum many years ago after watching one too many near death wing collapse videos. Although I suspect that subsequent improvements in design of such a wing might ultimately end up looking exactly like a tube kite.

Safety in PG goes hand in hand with collapses, if we don't get a frontstall because we have a "sollid" LE / wing there will be way more deaths..