Some argue it is an advantage, others dont.

Maybe different scenarios whether an advantage or disadvantage?

In my mind it is only a downside though, you lose performance in light wind.

Kite accelerates slower so also a disadvantage in general IMO.

Building up energy by looping it around for faster and faster speed, before your start, which should be the only advantage, does not work I think.

Yesterday I had, by pure chance, an interesting experience.

Riding with an 8 m2 Peak4 27 m lines in 7-8 knots of wind, just on the verge where I sometimes could not start, most times just possible, so rode a while.

The wind dropped just a tad so I had to try without success for a while, it was soooo close (but no cigar), and drag out (and back in) so took a long time.
Then the wind got back, in fact even more than when I rode for starters, and rain was almost or fully stopped also.

But it was impossible to start now with this heavier kite...

When kite was looped down, it had loads of pull like normally, and it turned just fine, but as soon as it was flown up, all power was killed totally, because it was heavier.

Amazing difference, but I could definitely not utilize this added weight for anything.

Had I taken it out in this wind, dry, I would get up and riding immediately, no doubt.

What are other riders exeperiences regarding this?

Some might say the wet surface is the reason, and not the weight - I can not see why though?

I know this was a single skin kite, but the same should partly apply for a double skin kite, dry versus wet, some might have experiences with this.

It’s an advantage because the “trapped” air gives the foil its shape which is more efficient. Why racers don’t use single skins. The airfoil produces lift which is why you can “spin up” the kite and build more power with more apparent wind. Also why you get a good power stroke when the kite travels up. You can’t do that on a SS.
Top

Of course, but that wasn't the issue, we know that.

It was whether the weight of the trapped air can be an advantage in terms of increasing total energy for the start, or not?

Some with a double skin 8 or 10 m2 must have been able to compare dry versus wet?

Yea in the rain my foils end up being sluggish that’s for sure. Not so much now with the newer fabric but it’s still noticeable. Mostly it just doesn’t climb as well.
Top

I understand the reasoning very well though, that a heavier kite, everything else being equal, can be flown in loops and getting a lot of speed thus more energy this way, so when you need to get it to "pick you up" on foil, you have the extra kinetic energy available for this now.

Its just, I think it is only in theory, as real life has shown this sluggish feel of either a rain wet kite, or a kite not in UL but normal material (several brands offer different weights same kite), gets you started in more wind and not less...

Because gravity simply does not add the same when flown down, as you lose when flown up - you will lose overall IMO.

This is why I think the lighter the better, and also the reason why our otherwise more draggy single skin small kites actual can start just as early as many other kites - almost no weight is key here for being able to fly in every direction without changing speed nor losing power.

Its impossible to solve this on forum and knowing your position i know you will find arguments for "added mass is bad" - it called confirmation bias.

So my bias is added mass helps.

Argument for this is every kite i ever used pull more on downstroke when wet. Of course you have very limited window how to use that power - normally its one shot one kill - meaning straight to foil on first or nothing.
Trapped air doesn't make double skin upstroke slower because air in air have neutral buoyancy. You have just momentum to overcome.

And maybe airfoil on double skin are just so much more efficient... Who knows

extra weight is always bad, trapped air is good because of the more efficient airfoil, even though it air weighs quite a bit well not "weigh" but has mass, I guess a kilo or two? Something like that.
Top

Don't forget that there is also a lot of trapped "stagnant" air behind the leading edge of a tube kite, although the exact amount depends on the angle of attack. Hard to get any good data or comparison between kites out of this as there are so many parameters influencing the performance of a kite... 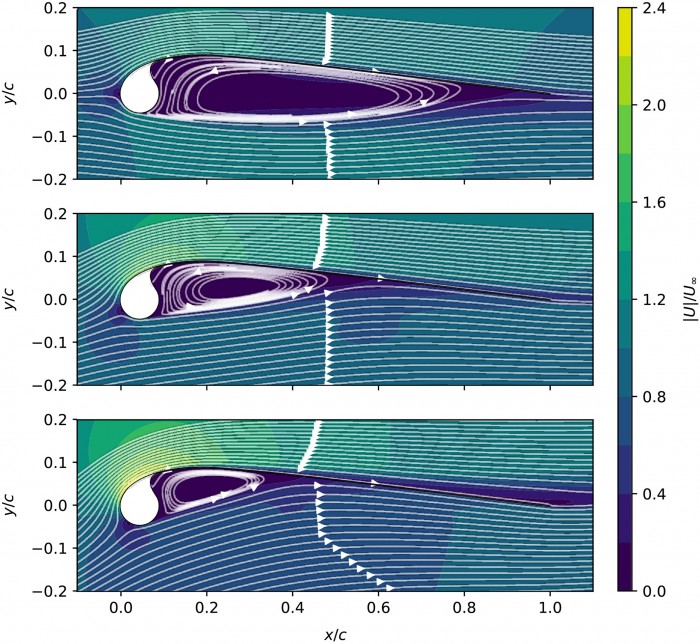 You are right, a heavier kite flown down will deliver more power on this stroke, no doubt, in particular if accelerated somewhat horisontal first.

But for looping around I am pretty sure you will lose energy.

ALSO even if it is air which should be weightless - it is not, when accelerated.

A double skin kite has a lot more weight because of double surface, so when flown down weight will accelerate for longer (but at the same rate), but you also need to accelerate the trapped air, which is on cost of energy.
And when flown up, it will lose speed, but here the weight both kite and air will try to keep its momentum, correct and an advantage for a brief moment.
As at some point the heavier double skin kite will have constant speed, pull equal drag+gravity so to speak.
The lighter the kite, the higher speed on its way up, after the initial momentum conservation where heavier kites and air is an advantage.

I would think keeping constant speed when looped around, is by far the most effective, as changing speed equals loss.
Therefore you can start earlier with a lighter kite, no matter if a single or double skin.

But agree you might be able to get more energy out with a heavier kite if you can get up foiling on the downstroke and its following added momentum.

Agree we can not "solve" this discussing, but still an interesting paradox so would start its own thread and everyone can just avoid it now, apart from those who want to chime in

Evan you are right, the air behind the LE are somewhat trapped too - but some would claim it being drag when not closed cells.