Light and Frost, a non profit kite board research group, has been attempting to increase the stall resistance of a hydrofoil when operating 50 and 70 cm masts in heavy chop and wave during onshore wave riding.

When beating out thru multiple wave lines we began experimenting with small vertical tails the size of fins on twin-tip boards to help stabilize the foil. When hit with wave sheer usually cross wave similar to cross winds in airplanes, these small fins increased the directional stability so we enlarged the vertical tail size and mounted the rear stabilizer in a T Tail configuration. This configuration significantly decreased the foil stall when operating in the high wave sheer environment close to the surface where hydrofoils on short 50 and 70 cm masts operate. We tested this configuration on four different wing fuselage combinations on two different boards all with exactly the same result.

When beating out thru a wave line and hit with a wave or swell usually from the right/left forward area of the wing, the hydrofoil was barely affected. Prior to mounting the rear stabilizer on a T-Tail, the hydrofoil stalled easily unless the wing was loaded thru pumping or the fuselage was buried deeper into the water. With the T-Tail we could rest only our rear foot on the balance point and ride out through the advancing swell as the tail fin maintained the upwind angle.

The T-tail was mounted between the fuselage and the board to allow operating in shallower areas. We have not tested the T-Tail when mounted on the opposite side of the fuselage.

The board/mast.hydrofoil shown was the original test vehicle. Later we made the T-Tail more permanent as seen in the enclosed pics. 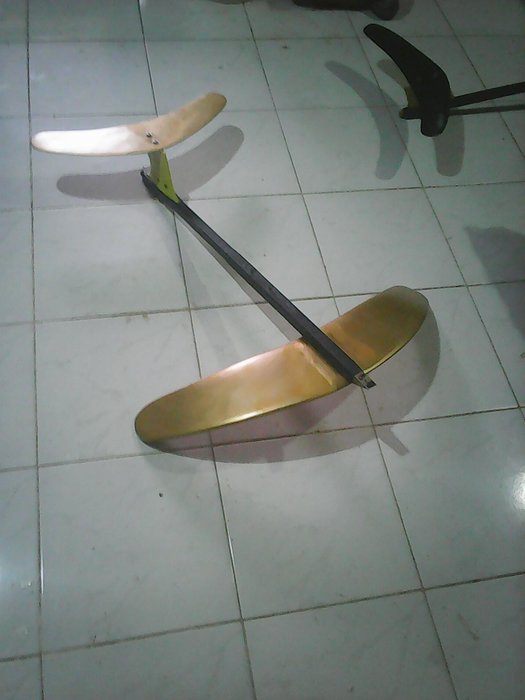 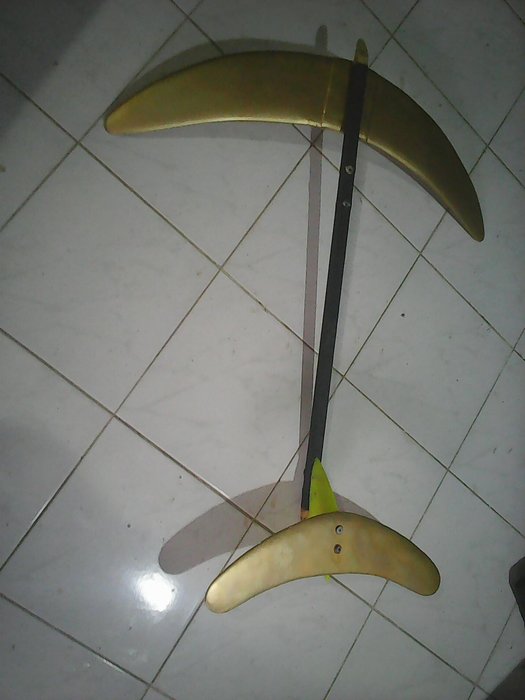 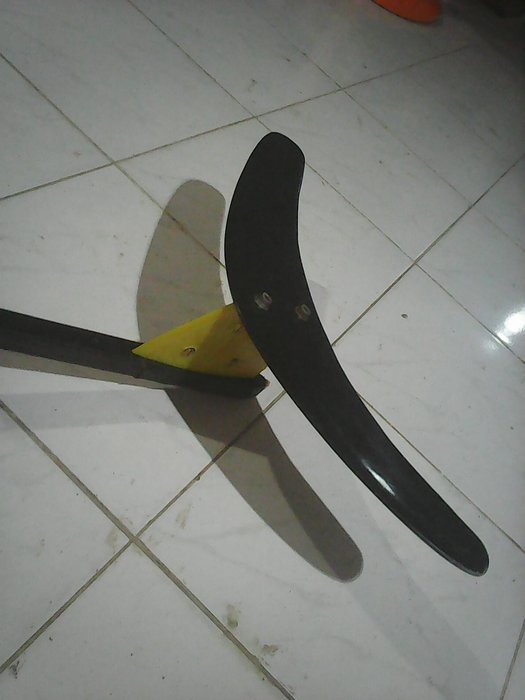 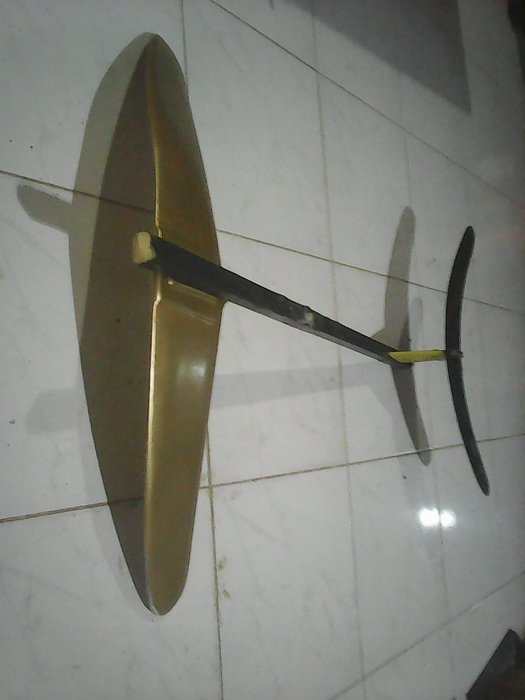 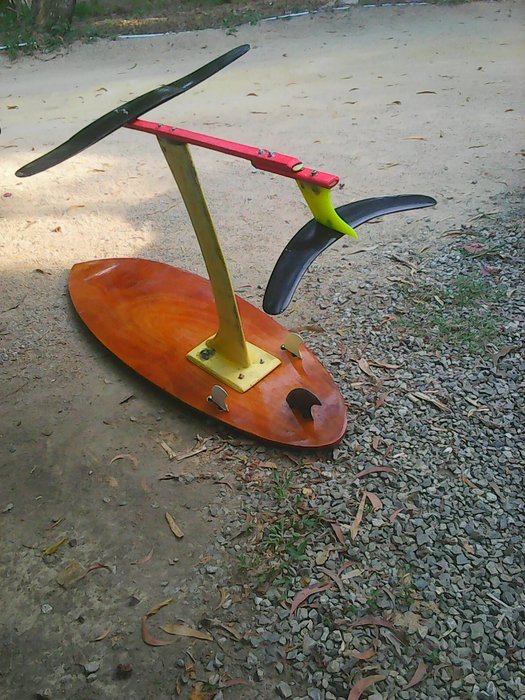 Funny how you talk like a multimillion dollar research organisation while my gut feeling tells me that I am dealing with a few students that just learnded to foil on their home built hydrofoil, please correct me if I am wrong.

Almost all foils have some kite of vertical stabilizer and even the T-tail is done on multiple off-the-shelf foils. Good to know that is does indeed what it should: stabilize your foil

Thanks for sharing your findings Lightandfrost

Those are some very specific, legitimate observations. It is so hard to find people sharing these hard won findings.

Keep up the good work and please keep sharing!
thanks, Dirk
Top

Interesting, your surf fin vertical tail rudder appears to give more area than most anything I can think of in kite foil tails.
Looks like with the big "rudder" you also can/must shorten the fuselage to get the turning you want. To me this seems like a decent idea as the tail of the foil is the most commonly kicked part, the most fragile part, and often runs aground first, leading to bent screws or fuselage.
Top

Thanks for posting your results.

Do you think the vertical surface area is making all of the difference, or does raising the stab out of the front wing turbulence have something to do with it?
Top

When approaching this work keep in mind that our main interest here is to ride out thru a breaking wave line on 50 to 70 cm masts, turn around and ride
back in. We have no interest in racing or riding flat water or using longer masts.

We noticed that when hit with wave or swell when beating out, there would be a lateral yaw which sometimes resulted in a stall. As we have ATP rated pilots
testing these variants the logical aviation correction was to install a vertical tail above the stabilizer. We tried larger and larger vertical fins and got better and better results as the lateral yaw disappeared, was dampened and self corrected. But the real overall improvement was mounting the stabilizer on the T-Tail.

Our view is that all design comments by BWD and opie are valid. Placing the T -Tail above the fuselage protects the T-Tail/Stabilizer from damage. Better and better results were obtained as the size of the vertical tail was increased. And placing the stabilizer out of the front wing turbulence smooth’s the ride.

We will probably install some vortex generators on the outer 1/3 wing sections' leading edge and see what occurs. You can find our vortex generator comments in this forum

In closing and in reference to BWD's comment "often runs aground first, leading to bent screws or fuselage." Our fuselage is a Stainless Steel square or rectangular rod filled with epoxy resin and silica powder. It is then covered with rubber cement and layers of shrink tubing. If the shrink tubing gets damaged we just strip off the outer layer and apply another outer skin replacement. We have never had to replace the outer cover on any of our various test fuselage variants. The stainless steel fuselage can sustain high impact as it does not crack or shatter due to impact resonance like carbon fiber.
Top

Light and Frost(L&F) has done further testing of T-Tail configurations on short 70cm masts in rough water and heavy chop. To facilitate the testing process L&F fabricated a very large wing to slow the board speed down to the point where the wing/stabilizer/fuselage could be easily observed during water transit by the rider.It quickly became apparent that T-Tails mounted on the fuselage and above the fuselage when passing thru areas of heavy chop and waves were prone to breaking the water surface resulting in cavitation and loss of control. There was always an oral signal usually a medium frequency plop sound prior to the event with a visual indication of the ongoing water cavitation seen. There were no cases of front wing stall except when turning directly down the swell face at slow speed. The front wing simply encountered wave sheer lost lift with the nose impacting the water. Unlike stabilizer cavitation front wing stall was completely silent.

L&F next mounted the T-Tail below the fuselage. The foil was taken out and operated in the roughest most turbulent water area we could find for many hours. A 9.5 ram air kite on short strings was used as wind speed was high. With the T-Tail below the fuselage thus deeper in the water, stabilizer cavitation completely disappeared and board control in rough turbulent water and gusty condition was further improved. Pumping the wing stabilizer also seemed to be enhanced. 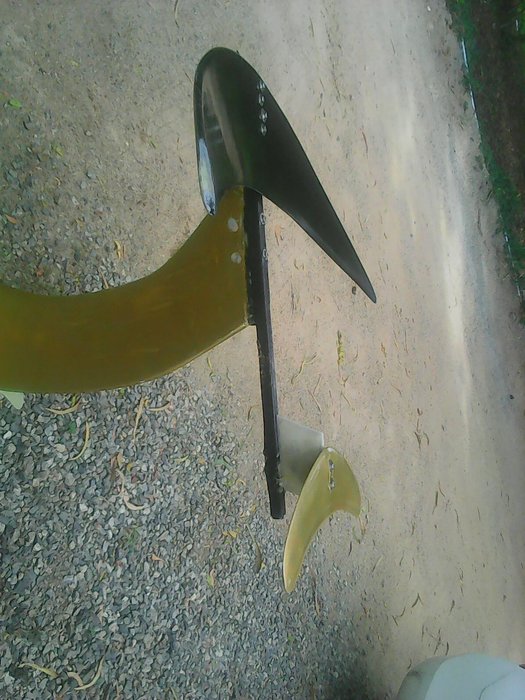 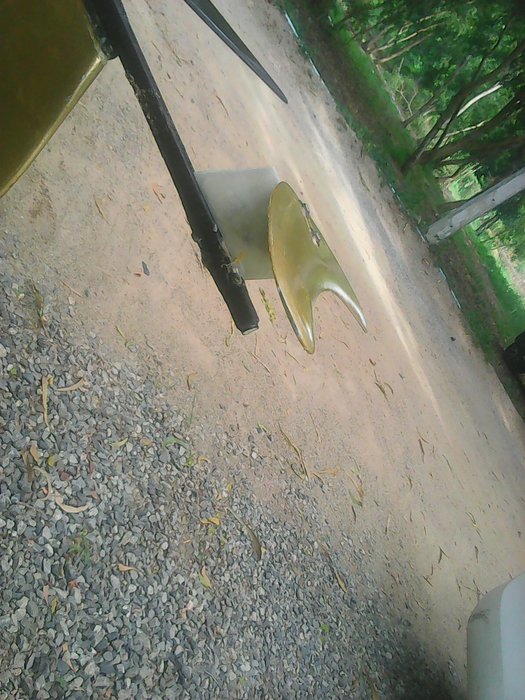 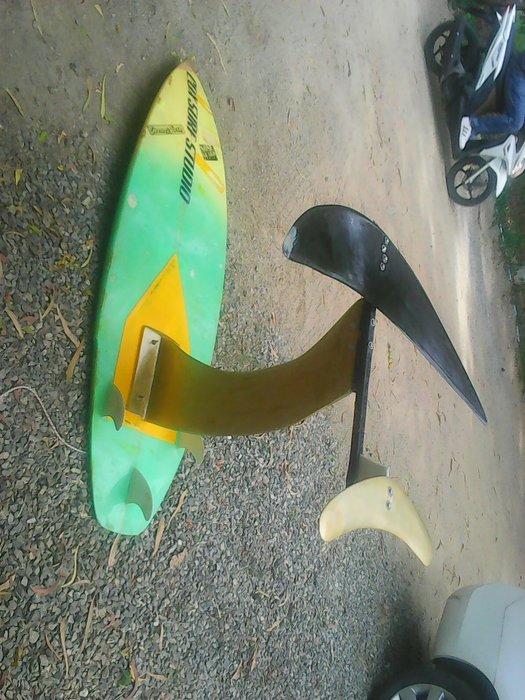 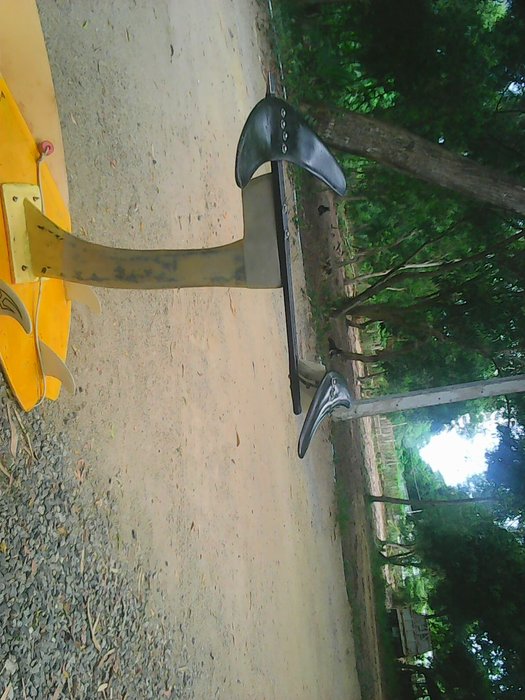 Wouldn't you need a more rigid fuselage to cope with all that?
Top

What advantage do you get from those curved masts?
Top

Looks like a redneck foil.
Prototypes are never pretty...one of them looks like the Alpine.
I really enjoyed seeing these.