It’s hard to make comparisons when there are all these variables. You have to factor in kite and wing size along with foil size, along with the skill level of the rider and what they want to do while riding.

For example: on any typical 25kt day, my twintip friends might be happy boosting on 10m kites, the surfboard folks ripping turns with 8m, on my 600(?) cm2 stringy foil I might be doing figure 8s on my 6m, and my buddy on his 1400cm2 surf foil is drifting it downwind on his 3m. On that same day, a wing-rider could have a giant 2800cm2 foil riding swells downwind with a 3m wing while another winger is on a 7m wing with a 1200cm2 surf foil doing huge airs.

If you increase kite/wing size and harness more wind energy, then you can make a smaller foil work – or you will be overpowered if you try to go too big. If you decrease kite/wing size, then you’ll need a bigger foil to get up foiling - or you’ll be underpowered if you go too small. Same principle applies to both kite and wing ... but a difference is you can't compare canopy sizes directly.

Because you dont ride similar powered at all

Or to say it little different at the moment of powerstroke - surge of power make bigger wings needed to be ridden in different way than smaller wings. You need to really stump them down. On wind wing this does not exist
Top

I think we misunderstand each other here Tom

My point is, the power vectors from the wing or kite when riding are the same, meaning you dont get less lift compared to pull, with a wing.

Again meaning, you can ride in more wind with the wing and have exactly the same absolute lift.

Some riding with a 4 or 5 m2 wing in 25 knots, well, that can be done easily on smaller foilwings with both a wing as well as a kite.

You can have the very same power using a wing, and if needed or desired, using a harness is easy, my friend did that here when he learned to wingfoil this winter, as holding onto the wing with thick gloves made it extremely tiresome - and we all know that when learning and also cold, fatigue comes faster, so a harness loop worked brilliantly for him.

But most likely not very balanced on a kitefoil.
And you can paddle out with your wingfoil, when not wearing a harness, a necessity in many conditions

Yes, the powerdive from the kite gives a lot more power on demand, no doubt, which is the main reason kitefoiling can be done in marginal winds.

But when riding, no difference.

In fact I would say you can momentarily get more lift to pull ratio with a wing than with a kite, which is one of the reasons it is possible to start foiling with such small wings.

As you can pump a wing, holding it very upright, and pumping the wings gives a lot in order to start foiling.
This is not possible with a kite, you can dive or loop a kite yes, but it will still only increase overall pull, but not the lift to pull ratio.
Okay, you can redirect the kite back and up like for a jump, but this is not beneficial for starting, as you get no forward pull.

Both types have the same way of sheeting power, no difference in this respect, when static.
Except for the wing being able to depower instantly so no run away mares like when kite hydrofoiling, where the kite still pulls like crazy if sitting deep and you have to fly it slowly to 12, or if you sheet out it accelerates thus for a while the same power, before depowering.


So if one wanted, easy to use a harness and ride with the same foilwings as we use for kitefoiling.

But as said before, that is not how it seems to balance very well, thus bigger foilwings are used for wingfoil, so more freedom with the wing and a balanced power

If one wanted to go fast, using a windfoil or a kitefoil is much more efficient also, so this implicitly gives the wingfoil the status of "being for fun" and not for performance, so seeking smaller wings and higher speed is not desired.
Only to some point of course, just like Gunnar uses a 1200 cm2 Onda for wingfoil when its windy, as it balances fine now.

No idea how gear choice will evolve and maybe change - time will tell, but it seems to work fine right now

My biggest problem with really big wing on kite initially was take off. It needs different timing. I switch my 633 with 790 back and forth on water. Guy using 790 /1600cm/ was struggling to take off on 633 - he was just taxiing at the start and his problem was "this wing has no lift". I on other side was struggling to not to shoot out of water. Take off is most difficult phase for brain to reprogram timing. Especially if you not used to switch wings often "which im not". I just need some time to adjust. Btw 790 wasn't slow turner at all.

What i was trying to say is that windwings doesnt give you this take off hard times.
Top

I think another challenge with using big foils and kites is trying to sink the foil at take off. This can be difficult with a really big foil and may even be a limiting factor since you cannot stand up on your board until foil is sunk. With the Wing, you start with the foil already sunk.
Top

Just watched this, amazing and fast, quite small foilwing (and board), see a screenshot I took here where you can see the foilwing is smaller than many of our kitefoil wings: 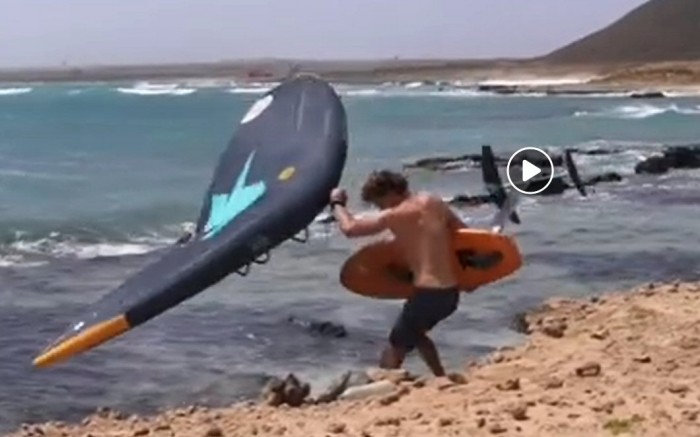 amazing. this is most progressive boardsport right now!
Top

tomtom wrote: ↑
Wed Mar 04, 2020 9:16 pm
Because they just have much more lift - and as much i agree with Peter about anything i dont think wing give you same upward lift than kite.


Why should a similar powered wing not give the same upward lift as a kite?

I see no difference whatsoever...

Of course a lower AR wing is not efficient as a high AR foil kite, but we are only talking about the amount of possible upwards lift compared to sideways/forward lift.

It should work exactly the same, whether you have lines on your "kite", or not (wing)

For sure, similar size wings/kites do not produce the same power. The reason is pretty simple. A "parked" kite and a parked wing are technically at ground zero when it comes to their pull, but the wing is actually even less because it is lower to the ground, although, the difference isn't that big for all intents and purposes. However, the pilot, being 100' (or so) from the kite can send that kite from one side of the sky to another, dramatically increasing the speed of the kite, hence the relative speed to the wind, which is what creates the massive differences in pull that the wing cannot muster. We use that "lunge" of power to get up on the foil, then park the kite in the sky to reduce its pull. However, when hull speed begins to increase the pull of the kite and the lift from the foil work interchangeably. The benefit of the initial lunge is that it has enough force to get the foil up to speed. I can reach similar speeds on my kite and wing, but on the wing you are limited by the size of the wing, angle of attack and type of foil. But on kite, even with the same setup, you can generate more pull from the same size kite as wing by undulating its path, thus its relative speed to the wind, thus increasing its pull. You can do that with the wing a little, but just a little.

So, although a parked kite will pull slightly more than a parked wing, you don't fly with a parked kite but use the lines from time to time to increase its pull when needed. If you held the kite on the ground, the same level as the wing, you would get very similar pulls. Attach lines to the wing and it would fly just like a kite. The lines/distance are the delta.
Top

slowboat wrote: ↑
Wed Mar 04, 2020 10:52 am
Most people feel a large wing (bigger than 1600, for example) is "too big" for kiting. Yet, for winging, the foils are at least that big and often much bigger and they have no trouble riding swell and waves. Is the difference the lift created by the kite vs the wing thing?

And then there's the surf guys who go out with 1m wide wings...

Depends how you kite foil -- if you just use the kite to pull you along, wing size doesn't matter because riding the board is the primary focus, rather than loading it up against the kite.

Which is why IMO many of the large wing kite foilers go for such tiny kites...
Top
Post Reply
37 posts