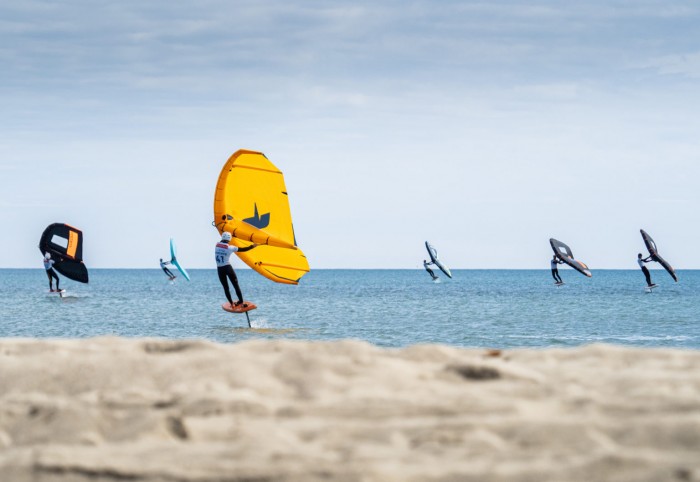 Yesterday we had our first sunny start here in Leucate! The substantial breeze blew hope through the air during the morning skippers meeting.

Aiming to speed up the tempo of the event, judges planned to kick off with the Surf-Racing discipline. Riders were told to remain alert for the calls, as the GWA Wingfoil World Tour race director Dani Jimenez and GWA head judge Mallory de la Villemarqué headed to the beach to plan the race course of the day.

Shortly after, the tractors were loaded with foils, and the riders made their daily commute to the competition site. Things were looking promising. The sun was persisting, and the wings were flapping in the breeze as the riders set up for action. By Midday, the breeze was substantial enough to have all the excited riders in the ocean testing out the course.

Due to the flat and light conditions, the judges separated the course into three short parts separated by two buoys.

Don't let the distance fool you. The course may appear short, but it is equally as potent! Especially the second half!

Throughout the course, the riders will find themselves in favor of the wind, against and even a part where they cannot use their wing at all. They have to cross by pumping.

Pro freestyle kitesurfer Paula Novotna (CZE), one of the most dedicated off-the-water athlete confirms - this final stretch is no joke.

"Pumping on the foil is exhausting! It's like a burner and workout for your legs so for sure, being fit on the water helps with every kind of Watersport."

If it tires someone as fit as Paula, it is most likely is a recipe for spaghetti legs for the rest of us. So we better get training!

At the beach, we caught up with RRD rider Francesco Cappuco (ITA) and Duotone Wingfoil R&D and Team Manager Klass Voget (GER) and asked them about the different Wingfoiling setups. They've both been heavily involved in the R&D process of the gear from the beginning of their Wingfoiling journey and had many interesting insights: