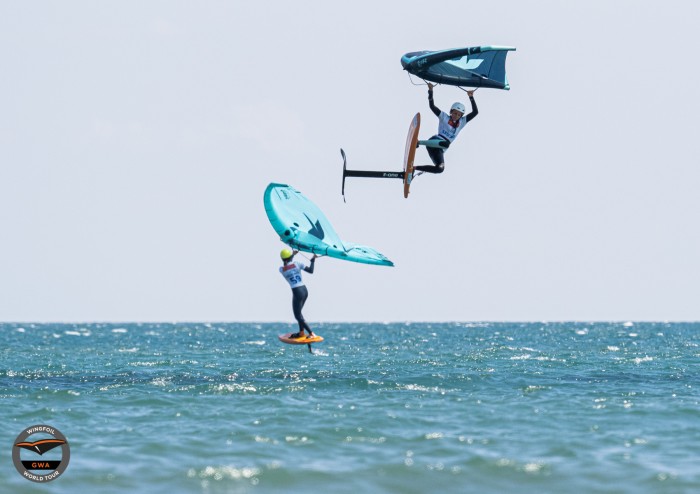 The sun was out bright and early on the last day here at Mondial du Vent, bright and early this morning, lighting the way to the playground for the final time. It’s a beautiful clear morning here, with a cold 20kts Tramontana chill blowing through the air. The women’s Surf-Freestyle heats were up first.

The motivation was high last morning, Flora Artzner (FRA) kicked the competition off with a high score of 15.79, what an amazing start to the day. The following heat between multiple times Stand up Paddling champion Olivia Piana (FRA) and a 22-year-old Bowien van der Linden (NLD) certainly woke us up. It was toe clenching close, but Piana came in hot with a Frontside 3 giving her the extra spice she needed to score the win. You could tell this was not her first rodeo!

The ladies had the crew cheering from the shores here as they flew through the heats! As we continued the day the Tramontana continued to blow glassing the ocean’s surface flat. Aside from the offshore gust you may experience during your heat, Leucate delivered the perfect conditions for the Surf-Freestyle discipline.

Olivia and Bowien’s morning battle was not the last performance of the day. They gracefully danced their way through their rounds, meeting again in the Finals where they took the stage for the final battle. Boy oh boy did they flap their wings. What a show.

The tension was high on the water. Olivia started strong with another incredible Frontside 3, spinning into a downwind 360 and flying up with a massive Air for a grand finale just halfway through the heat. But looks like she spilled the spice too soon as she struggled to land those last three tricks. Both of these queens deserve a crown for the performance they put on.

However there is only one of them for this division, and it’s placed nice and high here at Mondial du Vent. At some point, we learn that consistency is key when reaching high, it’s a long way up and one does not want to burn out before we get there. The 22-year-old Bowien smoothly landed her way through her trick range, leaving the water with the crow. The stoke on the shores was contagious.

Flora Artzner kept her game strong where she made her nation proud smoothly landing 6 of her tricks against the Brazilian water woman Marcela Witt (BRA). Flora arrived back on her nation’s shore to claim 3rd place on the podium.

Bowien wasn’t the only youth that showed up strong in the end. The youngest athlete on the GWA Wingfoil World Tour: Riccardo Zorzi (ITA) kicked off round 4 of the men’s Surf-Freestyle with a silky smooth BS3. He managed to slice his way through all the way to the Losers finals, showing unbelievable consistency repeatedly scoring above 16 points each heat and he is just 15 years old folks. Tim Taudien (GER) came Back looping in from the other angle. Looks like Tim wasn’t expecting the young rider to perform like an Italian stallion, and missed him by one point!

The Climax of the Surf-Freestyle approached as the recognized boundary breakers Balz Muller (CHE) and Titouan Gallea (NCL) from opposite corners of the globe met once again to battle it out against themselves and Mother Nature.

As the green flag rose so did Titian! Blaz rotating heads shortly after with his backside rotation. What a show. The warmth was in the New Caledonian's favor, as he pulled his rotations clean as a whistle. Balz was turning heads again with jaw-dropping backsides never seen before! He pushed the limit going for a huge inverted, almost going double, but tip over toes for the Titouan.

The New Caledonian tweaked his way with a final rotation in the last 10 seconds of the heat to the top of the Mondial du Vent 2021, returning to the shore with a ripped wing and a raining king.

WOMEN:
1. Bowien van der Linden (NLD)
2. Olivia Piana (FRA)
3. Flora Artzner (FRA)
But with the sun still shining the action was not over, the second Surf-Race elimination round was yet to come! The riders sliced their foils down the course as like butter, racing their way to the finals.

Olivia Piana (FRA) Still hungry for a win flew up to first place, Flora Artzner (FRA) remaining on her tail, and Bowien van der Linden (NLD) right behind that. It was a close call for the ladies.

Titouan must keep an extra battery in his quiver as his charge was not over from climbing his way to the top once and Balz certainly was not going to let his fellow competitor cross that line without him. Each of them on either side of the fast and furious Frenchman Camille Bouyer (FRA) sped their way to the finals, where Titouan power charged that extra pump claiming his second first-place title here at Mondial du Vent. Balz doubling up on his impressive 2nd place win, and Bouyer thriving in 3rd.

WOMEN:
1. Olivia Piana (FRA)
2. Flora Artzner (FRA)
3. Bowien van der Linden (NLD)
All competitors gave an incredible performance, making part of history with each heat they showed up for. But the two overall athletes: Titouan Galea (NCL) and Olivia Piana (FRA) really stood out in both disciplines and got overall event winner titles.

Defining moves that have never been pulled before is not an easy task. But to identify the best rider it’s necessary to create limits for others to achieve and break. It’s a tricky line to navigate the simplification of this crazy concoction of possibilities without limiting it.

The horizon may be hazy, but the athletes continue innovating as they passionately show up, combining all the knowledge that the Athletes have acquired from their respective disciplines and bringing it to the battlefields of this sport.

Looks like the athletes really are absolutely winging it in the creation of Wingfoiling. But most borders have been crossed by those who are winging it.

That’s a wrap for the GWA Wingfoil World Cup Leucate 2021 at Mondial du Vent! Many borders were crossed to get here, and boundaries were broken on the water. Everyone involved showing up at their 100 percent every step of the way.

We would like to thank our sponsors and partners who made the GWA Wingfoil World Cup Leucate happen! They trusted us, they supported us, they believed in us! Special thanks to the media, press, and of course the organizers for hosting us here at Mondial du Vents 2021!

See you all on the next battlefield! Watch the space.