The GWA crew and athletes are thrilled to be in Dakhla, Morocco, bringing this new emerging sport to Foum Labouir wave spot for the first time. It is an epic location known for incredible wind and waves, and the forecast for this coming week is no exception. 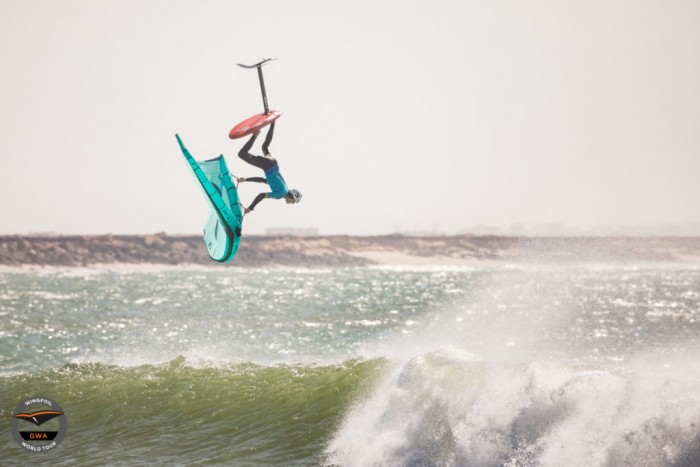 Registration took place at Westpoint Dakhla Hotel in the early morning, where 20 men and 5 women of over 10 nationalities signed up to compete at this event.

Wind and waves were pumping from the very start, so the Race Director, Juan Antonio Aragon, decided to start the event with the Surf-Freestyle discipline as the conditions were ideal. By 1 pm, the first Men’s Heats were already underway. Riders were competing in 15-minute heats, where they were allowed 10 wave attempts, with the 2 best waves counting and 5 trick attempts with 1 trick counting for their total score.

Men’s Rounds 1 and 2 were completed seamlessly, as the wind conditions were ideal. Titouan Galea’s opening performance at this event was nothing short of spectacular. He scored an almost perfect single trick score of 9.13 points, and an overall score of 23.67, the highest of the day. He proved right away that he means business here in Dakhla, and set the bar high for the rest of the event.

All riders advanced through Round 1, and for Round 2, it was Malo Guenole who scored an impressive 20.80 points for his heat, locking down his spot in Round 3 and knocking out French rider Francois Prevost in the process.

Things started heating up in Round 3, as riders went full throttle to avoid being eliminated from competition, and focus was on advancing through to the Quarter Finals. Chucho Nonnot managed an incredible heat, having just landed in Dakhla half an hour before he hit the water due to flight delays. He knocked out Sebastien Jourdant from Round 3. Joining him in the Quarter-Finals will be Camille Bouyer, Francesco Cappuzzo and Hugo Marin.

Francesco Cappuzzo went from strength to strength today, gaining an overall score of 18.47 points in his heat against Hendrick Lopes. Francesco rode smoothly and confidently, showing that he was extremely comfortable riding in Dakhla, after having been here training for over 3 weeks now.

“I’ve been wingfoiling a lot in waves this last year, and these conditions are really similar to what I’m used to at home in Sicily, so i felt really comfortable riding today,” said Francesco. “I have been here in Dakhla for over three weeks now, so that definitely helped. The waves were really perfect this afternoon, and if you chose wisely you could connect the three sections, and that is what always gives you the biggest reward. My dream for sure is to win this event, and I will fight for it. I’ve been training a lot more racing than freestyle and wave, but I feel really good in both disciplines here.”

The competition continued steadily up until 6pm, when the wind dropped, in the middle of Round 3, Heat 5, between Jerome Cloetens and Fabian Muhmenthaler. They had been neck and neck throughout, but the decision was made to call off the competition for the day, and the full heat will be re-run tomorrow.