by Toby
Dakhla has been serving up some incredible conditions for the GWA Wingfoil World Cup, Morocco this week, but the wind got off to a slow start for Day Two of competition. It wasn’t until mid-afternoon that the conditions became suitable and the action got underway as we continued with the Surf/Freestyle discipline. 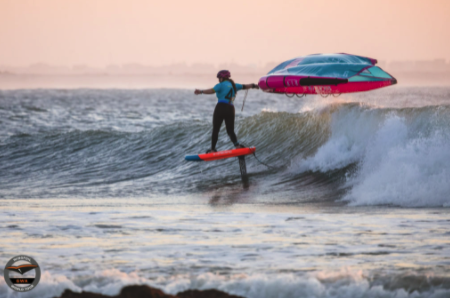 With various false starts, the competition finally commenced at 3pm, with Men’s Round 3, Heat 21. The format for today was changed to a pure wave format, due to the lighter wind conditions. Riders were given 10 wave attempts, with the top 2 scores counting. The heat duration was also extended to 18 minutes, with a 4 minute transition time.

Heat 21 was between Jerome Cloetens and Fabian Muhmentaler, where Jerome unfortunately managed to destroy his wing in the opening minutes of the heat as a large set came in. He managed to complete the entire heat riding with just half a wing, yet still scored several decent waves which gave him the advantage over his team-mate Fabian.

Fernando Novaes from Brazil faced French rider Clement Colmas for Heat 22. Two very calm and collected athletes, they each awaited the most suitable waves throughout their heat, but it was Fernando who managed to beat Clement by just a fraction of a point on his last wave, allowing him to advance to the Quarter-Finals.

Julien Bouyer held a steady lead against Mathis Ghio for Heat 23, where his 8.20 score wave gave him a secure lead throughout. All attention then turned to the final heat of Round 3 where the young 16 year old Malo Guenole knocked out the current tour leader, Titouan Galea. Titouan couldn’t seem to find the same magic as yesterday, and struggled to keep up with the pace of Malo, whose fluid turns and impressive style gave him the lead and the well-deserved spot in the Quarter-Finals.

Camille Bouyer came up against Chucho Nonnot for the first heat of the Quarter-Finals. The pressure to perform during this round was high, and Chucho put up a good fight, however it was Camille with his 8.27 point wave, who advanced to the Semi-Final.

Francesco Capuzzo unfortunately struggled to repeat his strong performance from yesterday, and Hugo Marin managed gradually build up stronger scores to secure his win. Joining him in advancing to the Semi-Finals was Fernando Novaes, who showed great experience and solid riding to advance over Jerome Cloetens. Fernando, in contrast to many of the riders here, comes from a surfing background as opposed to a wind sport background, and this is often visible with his impeccable wave selection.

“I’m really happy to be advancing through another round,” Said Fernando. “I come from a surfing background, and wave selection is everything. I’ve been really careful to choose my waves, and so far it has paid off. I’m just taking each heat here as it comes, and having a good time.”

The last Quarter-Final of the day was extremely close and came down to the last seconds of action, as Julien Bouyer managed to defeat young-gun Malo Guenole by just a fraction of a point.

Tomorrow’s semi-finalists will be:

Pioneers of this emerging sport, the women of the GWA put on a strong demonstration of skill and talent as they hit the water for Round 1 this afternoon. Paula Novotna from the Czech Republic came up against Brazilian Marcela Witt for Heat 1. Paula maintained a constant lead, after gaining a strong start, despite feeling very unwell today, her performance on the water showed otherwise. She advanced directly through to the Semi-Final.

Heat 2 was between Fiona Wylde from USA, Orane Ceris from France, and Dutch rider Bowien van der Linden. Fiona set the bar high from the very start, showing some very accurate wave selection. This is the first GWA event for Fiona, who is a 3x SUP World Champion, and she proved that she is just as comfortable competing within this discipline. She advanced with a fantastic score of 15.23 points, with Bowien close behind her. Bowien and Orane passed through to Round 2, with Fiona advancing directly to the Semi-Finals.

For Round 2, Marcela Witt from Brazil went up against Orane Cerise from France. Both competitors struggled with the lighter wind conditions, typical of this location in the late afternoon. Orane managed to push that little bit harder, gaining the scores and advancing over Marcela, into the Semi-Finals.

Paula Novotna had to once again regain her strength for her semi-final heat against Bowien van der Linden. She fought hard during the last moments of competition of the day, but Bowien rode an exceptional wave, smooth and controlled, gaining an impressive score of 7.87 points. Paula was not able to top that within the remainder of the heat, and Bowien advanced to the finals.

The last heat of the day was between Fiona Wylde and Orane Cerise, both battling for a spot in the final. Once again Fiona showed great experience with her wave selection and advanced to the final over Orane, with a 12.54 total score. Tomorrow she with face Bowien van der Linden in the Women’s Final.

The action came to a close as the sun went down over Foum Labouir. It’s been another action-packed afternoon, which will be continued tomorrow with both the Men’s and Women’s Finals.