The wind conditions finally improved in the early afternoon for Day 3 of action in Dakhla, Morocco, where the full Surf/Freestyle Elimination was completed for both men and women.

For the final day of the Surf/Freestyle Elimination, the Race Director chose to run 20 minute heats, with the judging criteria remaining the same as yesterday: pure wave format. Ten waves were allowed, with the top two scores counting. The judges were looking for fluidity and style, commitment on the wave, variety, speed and power. The famous Foum Labouir point break dished up some decent conditions for this 3rd day of competition with the wind averaging 12 knots, and 2-3 foot waves.

First in sequence for the afternoon was the Men’s Semi-Finals. Hugo Marin vs Camille Bouyer. Both riders battled wave for wave, and it was incredibly tight throughout, but it was Hugo who just managed to advance to the final with 14.80 points over Camille’s score of 14.40.

The second Semi-Final of the day saw Fernando Novaes encounter some technical issues and miss the majority of his heat as he had to return to shore to pump up another wing. He managed to get back into the water for the final 5 minutes of his heat but couldn’t find the wave he needed to beat Julien Bouyer who had two scores already racked up. Julien advanced into the final against Hugo Marin.

The Men’s Final saw two incredibly talented rides go head to head – Hugo Marin vs Julien Bouyer. Both men put together an impressive heat with accurate wave selection and solid riding, but Hugo, who has been extremely consistent since the start of this competition, rode an impressive wave. He added an air 360 and landed on the critical section of the wave, pulling together all of the elements that the judges were looking for and scored 8.10 points. Julien tried his best but he couldn’t top the overall score, and Hugo rode back to shore, delighted to be claiming the victory here in Dakhla, Morocco.

“I’m so happy to win this event here in Dakhla,” said Hugo. “The conditions were definitely not easy, and wind was light, but I was very happy to compete against Julien, who is a great rider. I’m of course really happy with this result, I have no words really.”

Fernando Novaes joined Camille Bouyer for the Men’s Small Final. These two riders have completely different styles which made it a fascinating heat from the start. Fernando decided to ride this heat strapless, adding to his very pure surf style. Both riders were scoring wave after wave, with Julian gaining two very solid 8 and 7.60 point waves. Fernando rode fluidly throughout, but it was Julian who nailed the extra points, and finished the competition in 3rd position. 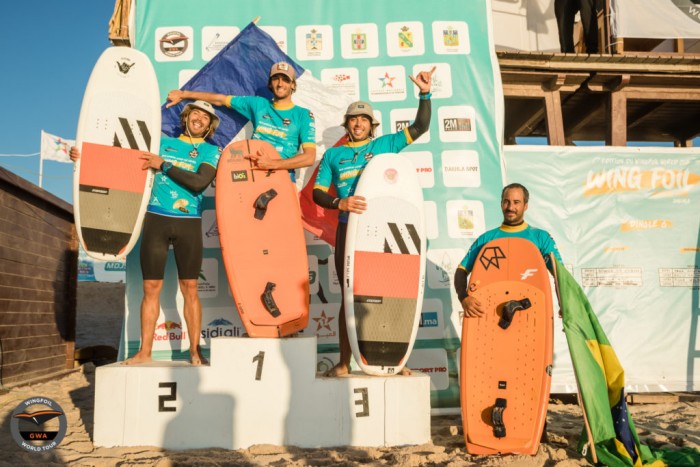 Bowien van der Linden faced 3x SUP World Champion Fiona Wylde in an action-packed female final. Both women were accurate with their wave selection, with Bowien scoring 5.93 for her first wave, but Fiona pushed that little bit harder, scoring a 7.07 and 7.33, her style and flow on each wave showing just how comfortable she is riding in these Dakhla conditions. Fiona Wylde won the heat, and was crowned Queen of the Desert here at the GWA Wingfoil World Cup in Dakhla, Morocco.

“Honestly I’m so happy to be here in Dakhla with these amazing conditions,” said Fiona. “I didn’t expect to win this event, but I’m very happy of course. I can’t make it to the next event in Brazil as it coincides with another event that I have, but I hope to join in again next year.”

Paula Novotna really found her strength again for the small final. She went up against French rider Orane Cerise, who struggled to find the right waves during this heat. Paula managed a better selection, and her calm and smooth style allowed her to claim a podium finish here in Dakhla. 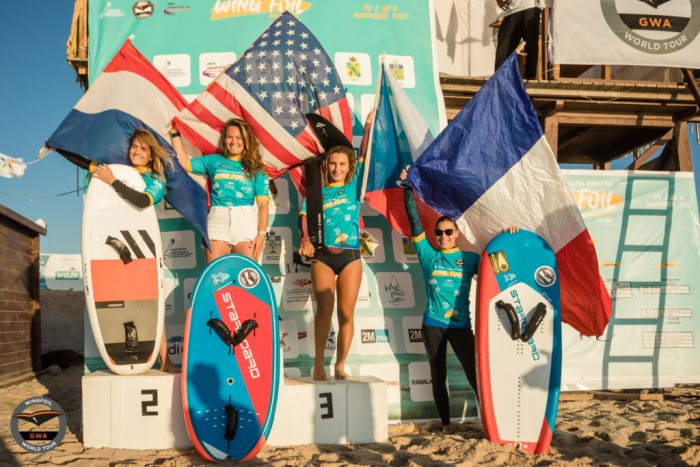 The action came to a close as the sun went down over Foum Labouir once again.

Tomorrow, we will move on to the Race Discipline, so get ready to watch as the athletes go full throttle for some speedy action!