Day Three of the GWA Wingfoil World Cup Fortaleza proved to be the most exciting day of the event so far. The full Surf-Freestyle Elimination was completed, with Bowien Van Der Linden and Titouan Galea taking the win. 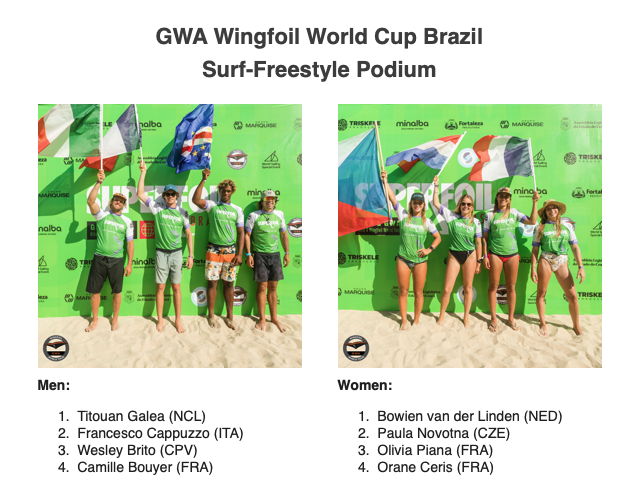 First in sequence for day three was Women’s Round 3, where Orane Ceris from France faced Marcela Witt from Brazil. The judging criteria remained the same: 15 trick attempts, with the top 4 scores counting. Orane Ceris took the win for the opening heat, locking down her spot in the semi-finals and eliminating Marcela Witt from the competition.

Paula Novotna, a very experienced freestyle kite competitor, once again showed off her powerful moves for Heat 2. She had a close fight with Kylie Zarmati, who landed some solid tricks of her own, but Paula was on fire landing an impressive Frontside 3 scoring her 7.50 points, and allowing her to advance to the next round.

The last quarter-final for the women was Bowien van der Linden vs Lidiane Viana Sanders. Bowien was on fire today, and landed an impressive array of tricks, allowing her to advance with a total score of 20.17 points. Lidiana, but up a good fight, remembering that this is her first GWA competition, but Bowien clearly had her eye on a podium position for this event and wasn’t going to let anyone stop her.

Paula Novotna gave a repeat of her usual high-standard performance for the first women’s semi-final. Orane Ceris did not manage to put together the heat she was looking for, and Paula advanced to the final, a well-deserved win for the Czech athlete.

Olivia Piana faced Bowien van der Linden for the second semi-final, where both women fought hard to claim a spot in the final. They remained close in points throughout the heat, but Bowien managed to gain a lead on the scoreboard, landing cleaner, well-executed tricks and advanced to the final to face Paula Novotna.

Olivia Piana opened strong and managed to maintain the momentum throughout the heat. Orane Ceris, unfortunately, did not manage to get the four full scores that she was looking for, and so Olivia seized the opportunity and won the 3rd podium position at this event.

Bowien van der Linden started the final with a strong lead, locking in some great scores early on, including a nice Frontside 3. Paula Novotna was trailing close behind her and kept pushing herself harder to land a big trick. Bowien, however, was landing most of her trick attempts with good speed and clean landings, putting on a polished display from start to finish. Paula was unable to catch up to her despite her best efforts, and Bowien claimed the win of this final in Fortaleza. Both of these women are leading the way for women in the new and evolving discipline;

“I’m just extremely happy to be in the final. All the tricks I do are new to me, so I’m not really consistent yet but I’m doing my best,” said Paula Novotna. “Let’s see how I do in the next event.”

“The final went really well, Paula was such a good opponent, but I really got all the tricks I wanted to go for, “explained Bowien. “In the last few seconds of the heat, I even managed to pull a blind 360. I can’t believe it’s my second win already on the tour. It’s just crazy. All girls should come and participate because you never know what can happen! Since Leucate the level has really risen, and so it’s so exciting to see it all grow.”

The results of the Surf-Freestyle are:

Titouan Galea showed no mercy for the first semi-final of the day, as he opened the heat with an outstanding Backflip scoring 9.10 points, which he followed up with a Frontside 5. Wesley Brito knew he would have to go all-in if he wanted to stand a chance against top-seed Titouan, but he was not able to land many of his trick attempts. Titouan advanced to the final with an impressive 29.10 point overall score.
Francesco Cappuzzo went up against Camille Bouyer for the second semi-final of the day. Francesco produced a solid display of tricks, nailing four solid scores, which allowed him to advance over Camille and lock down his much-desired spot in the finals.

Wesley Brito went head to head with Camille Bouyer, in the mini-final which decided the 3rd and 4th positions from this event. Despite the lull in wind conditions, Wesley Brito managed to persevere and won the heat over Camille, who struggled with the drop in wind.

Titouan Galea seemed unstoppable for the men’s final. He opened as usual with a Backflip, but this one had even more height and power than before, scoring 9.47 points, the highest of the event. Francesco Cappuzzo was delighted to be in his first-ever final, and landed solid tricks throughout the heat. However, Titouan just kept busting out explosive moves, making it hard for the Italian to close the gap. Francesco, who is a very versatile rider with experience in many watersports, needed just 7.08 points to gain the lead in the closing minute, but he could not top Titouan’s scores, and had to settle for 2nd place here in Brazil. Titouan Galea claimed yet another event win here in Brazil.

“I was surprised that it was such a tight heat,” said Titouan. “I’m just happy to finish in first place, but he is not far behind me in the ranking. We both tried some doubles today, but neither of us landed them. Let’s see if we can train to pull them out at the next event in Tarifa.”

“I’ve been training a lot, but finally at this event, I put everything together and worked really well,” said Francesco. “I still need to train more in stronger wind. I’m very happy, and I think I was sailing pretty well. If I’d known how close it was going to be, I would have gone for a different trick on my final attempt. Now I will have to wait until the next event in Tarifa to beat him.”

The results for the Surf-Freestyle men are:

The focus now shifts to the Race discipline, where the first possible start has been called for tomorrow morning at 11:00 (GMT -3).