Has anyone experience with these? 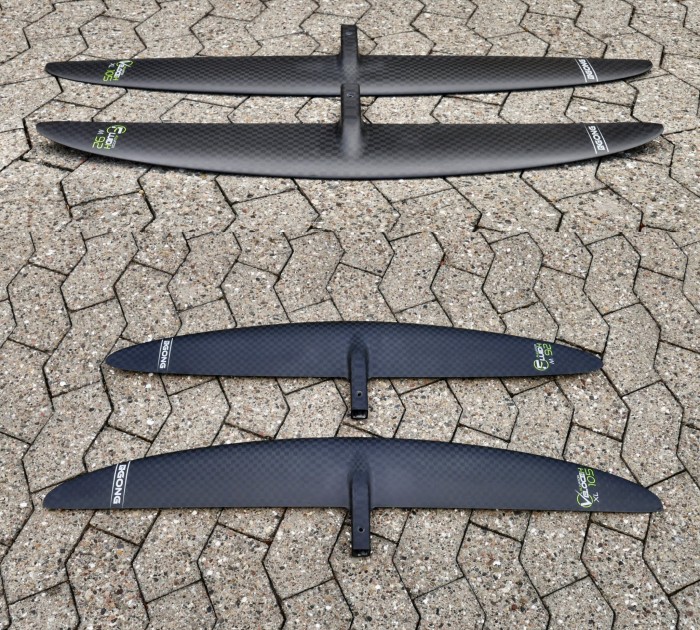 What stab(s) did you get?
Top

So you bought 4 new HA wings all at once? Interesting. I just bought a Fluid HL to try out along with two of the Fluid pro stabilizers. Mine are in transit.
Top

No not 4, it is a picture of the two i wrote about to show the shapes

What stab(s) did you get?

Oooops, I see that now. I’m surprised you didn’t go for the new pro stabilizer when you ordered the ha front wings. Of course I’m not sure how much of a difference they’ll make either. I ordered a 42 and 45 cm Fluid H. I expect to retire my existing stabs and fuselage
Top

Wouldnt make sense to use a Fluid H 42 or 45 stab for me, as they are bigger in area than my current Fast 40 stab and about the same AR and thickness.

Yes you can get a 36 cm 141 cm2 Veloce stab now, could be interesting but we will have to see later, my Fast stab is perfect for now

Which stab(s) do you have now since you want to retire (sell) ?

I use the 85 cm monobloc carbon mast/fuselage.

Yes you can get a 36 cm 141 cm2 Veloce stab now, could be interesting but we will have to see later, my Fast stab is perfect for now

Which stab(s) do you have now since you want to retire (sell) ?

I use the 85 cm monobloc carbon mast/fuselage.

I currently have the Veloce 47cm and 43cm stabilizers. The Veloce LT/43cm stab is my daily driver and XXL/47cm stab is my light wind rig. Also have an 85cm V2 carbon mast (no integrated fuselage) and a V2 fuselage to work with the new mast. Since you’re already invested in the 85cm mono block, I’d fully understand wanting to stay with the current stabilizers, since the monobloc is not compatible with the new “pro” stabilizers.

I’m hoping to see a slight reduction in drag and speed increase with the “pro” components, which is what Patrice is claiming. I’ve always been happy with Patrice’s foil designs compared to other brands I’ve ridden (Axis and SAB) so I’m going on a leap of faith. At Gong prices I don’t consider it a big risk.
Top

I’m looking forward to you trying them out too

I had one on order but it was going to take so long I decided to cancel and wait until there was some user feedback.
Top

Couldnt jibe the Veloce XLH 1145 cm2, it would try to turn back halfways...
Couldnt surf with wing flagged, it would tilt...

Moved my front foot in over the centerline, and now I could jibe, but too unsteady when riding flagged.

The Fluid M worked great, but tried it after the Veloce XLH, needed some power and speed as only 994 cm2 for my 78 kg, but once riding it was intuitive and easy and turned very fast and surfed well because of the speed.

Next day (today) I tried the XLH again, and found I had to place my front foot quite "normal", and my rear foot far to the leeside edge.

Now it turned really well, amazing for this high span 103 cm feels much smaller turningwise.
But even more important, it was balanced when riding even a small windwave flagged, easy to control.
And could ride forever - amazing glide

It has to be "foiled" up at a bit of speed, but still starts quite early and I think it can ride in the same or less wind once up, than my existing wing.
Has incredible speed range also.

Cant wait till next time I can get out on the Veloce XLH, it was amazing today as soon as I got myself "adjusted" so to speak

In hindsight: I have ridden many wings, but for a looooong time only my Fluid XL and nothing but that foilwing.
Meaning all my body instincts were soooo set on this very wing, that adapting even a small different stance took me a long time