Windzup
Very Frequent Poster
Posts: 821
Joined: Sun Jan 25, 2004 4:04 pm
Local Beach: Skyline and Strawbs
Favorite Beaches: Any Mountain with snow and wind.
Style: funky
Gear: my favorite kite
Brand Affiliation: NONE, Be yourself and fly what you like... I do like Ozone People tho!
Location: Higher Elevations
Has thanked: 0
Been thanked: 0

Got to enjoy a new mountain spot with SW CO locals. Drive and Fly conditions located off highway 149 at 10,000 feet. One may wonder why it took so many years to be discovered by kiters, but a look on a map will reveal this highway is hidden in the heart of the state, with no direct access without driving around a mountain range. Awesome place, the nearby town is Creede, and it is surrounded by the amazing San Juans.

So far the local kiters have had consistent and strong mountain winds up there. It blew the last few days every day. Yesterday we had high 20mph winds, lit on 9-12m kites. Huge wide valley with slopes and terrain on both sides. Wind seems to funnel both north and south. Definitely on a road tripping hit list... chalk up another easy access mountain spot! 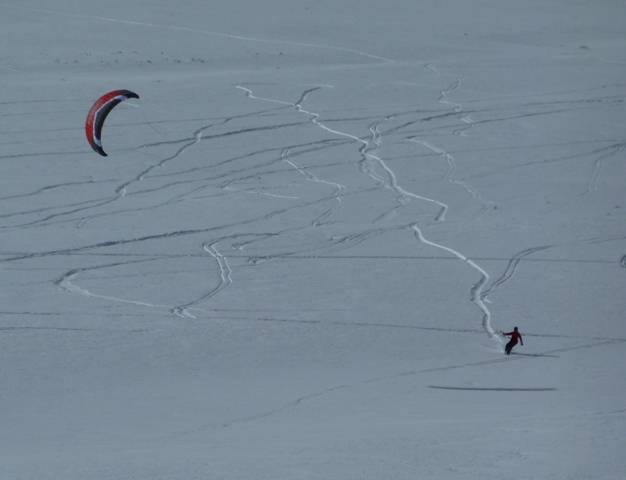 Beautiful! Thanks for sharing that.

I'm guessing you went up with TommyGunn! I ran into him in a great rum bar in Silverton two weeks ago...

What a weekend in the high country! Psyched you guys road tripped for it but sorry we didn't get to ride together.

This looks like a good Creede/Lake City area thread. Here are a couple of Google earth images of other spots along Hwy 149 I've checked out in the last few years. 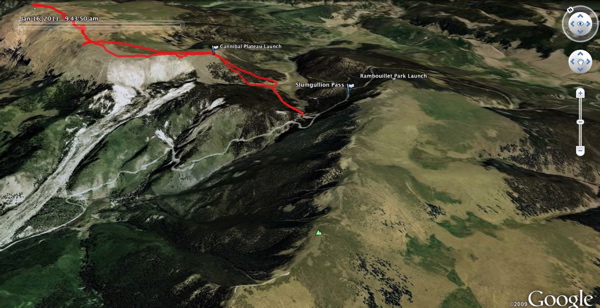 Looking NE at Slumgullion Pass. A 45 minute skin or easy snowmobile tow gets you up to launches on either side of the pass. Cannibal Plateau to the north is named for Alfred Packer who near here got the protein from his fellow travelers to make it thru the cold winter. Don't forget snacks!
Rambouillet Park to the south and west extends for miles along the continental divide. No GPS tracks from two days of kiting up there. I've hitched a ride on the snowcat that grooms the trails up here.

Looking east at Spring Creek Pass. Creede in the distance. After a skin up onto Snow Mesa I was racing towards the summit of Baldy Cinco when the wind suddenly died. There's a summer road (groomed snomo trail?) at the very right side of the image. 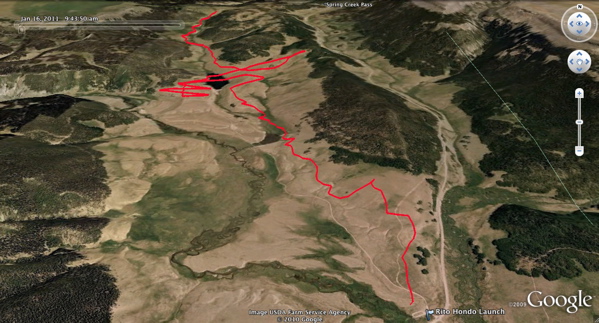 From Rito Hondo I went downwind and up valley almost to Rambouillet Park then took a groomed snomo trail to the highway at Spring Creek Pass.


Anyone else have spots along Hwy. 149?
Lots more to explore!
Glickster
Top

Nice Pics and Nice tracks! Great riding with plenty of false horizons and dynamic terrain. Great to ride a new area with a great crew, great to see Ozone in the SW! Here is a shot from last Friday at Rito Hondo - 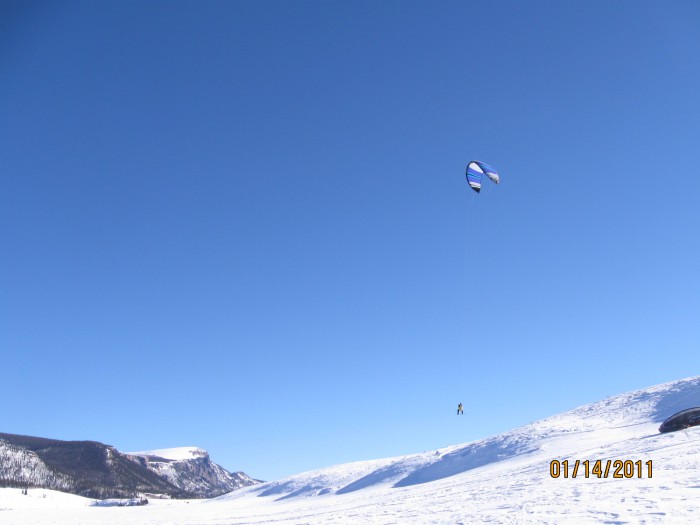 I don't know what stokes me more about being a snowkiter then folks gettin' after it and finding new spots to ride that are better then ever. We are lucky to be involved in a sport in its infancy with so much high adrenaline potential and all these riding options undiscovered yet. It reminds me of getting First D's in the whitewater world. That sport has been around a long time and the amount of people that are into it is as big as ever. We are lucky to be around this era of our young sport. Get it while the gettins good. You all are definetly getting my stoke up back east here. Love the pics. info and google maps. I can close my eyes and almost see me there. Cheers, JR
Top

Man guys, thanks for researching and finding those killer spots. Unless the wind forecast is bunk for the weekend, a couple of us will be coming down from Salida/Buena Vista to hopefully score a sesh at Rito Hondo or elsewhere.
Anyone else thinking of coming out??
Chris
Top

Just getting around to posting about last friday on Snow Mesa. (Just up the road from Rito Hondo, Creede area)
After several failed solo attempts in the last few years because of light (or lack of) wind we totally nailed the conditions. Just as forecast we found 15-25 WSW all afternoon while it was calm on the way past Rito Hondo at 10:30 and 5:30.

JA and I skinned about an hour up to the east from Spring Creek Pass on a groomed snomo trail. We launched on the corduroy at treeline and kited right up a sort of incision in the edge of the tabletop.

Once on top the views of kiting terrain extend seemingly as far as the eye can see in every direction. 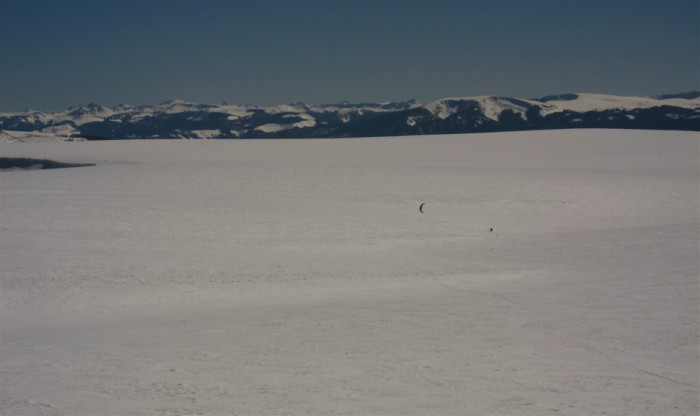 We spoke with two locals slogging around up there on snowshoes who fortunately had a sense of humor as we raced around laughing maniacally. 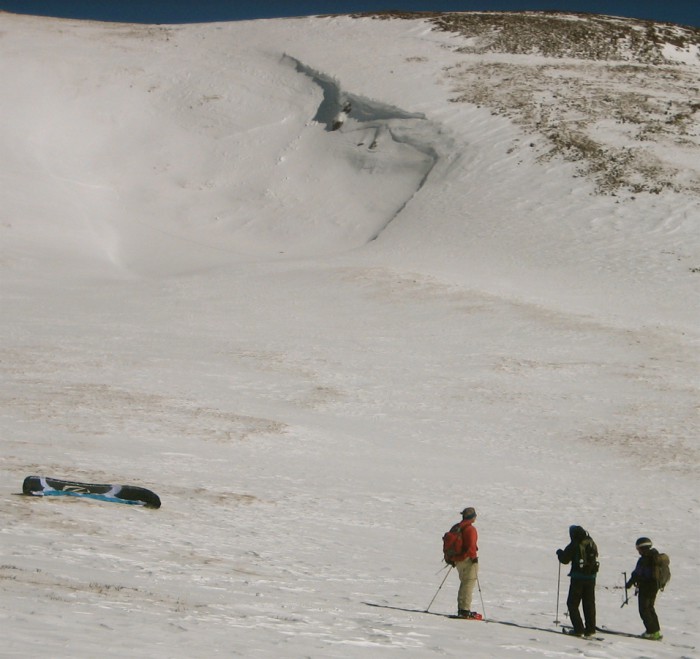 One tack was a non-stop 4.5 miles. Uncompahgre Peak in the background. 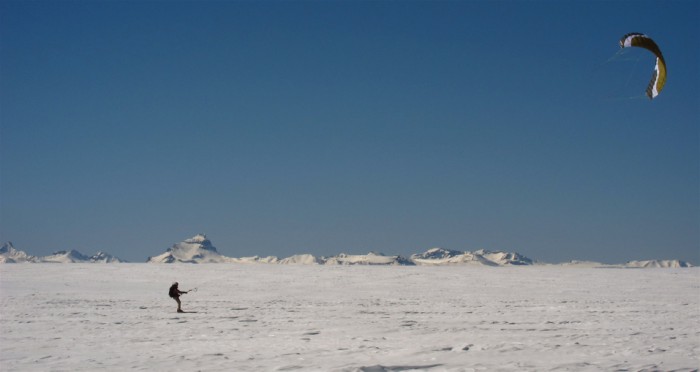 When we'd finally had enough of that we kited right up Baldy Cinco in about 5 minutes and parked our kites 150' away from the 13420 foot summit. The approach incision is just off Jonny's right elbow. 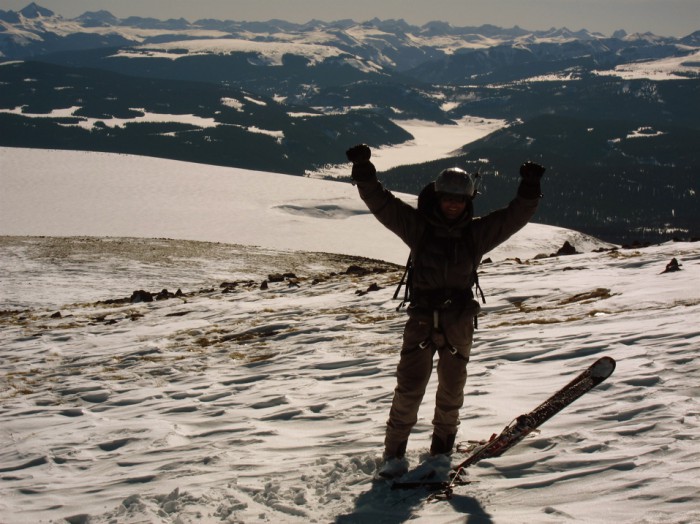 Snow Mesa is only one of at least three vast plateaus east of Spring Creek Pass and west of Creede that are all connectable by kite on the right day. 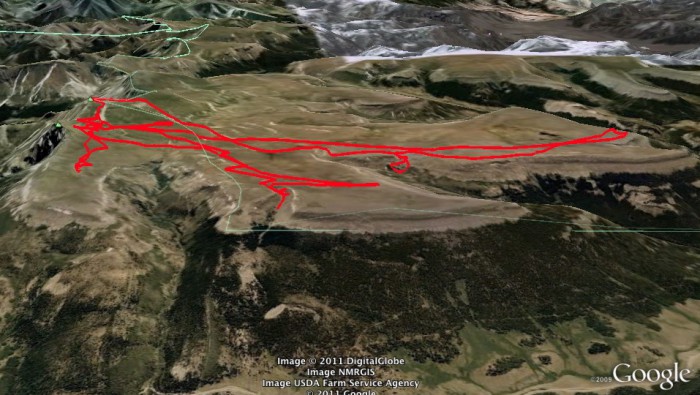 DAMN, so close but so far away. I am here in Salida passin' thru in the big truck and can't even think about tryin' to pull off a sesh like that. Got the gear with me, just not the time or the way. But I still dig the TR. Gotta do it someday. I guess I gotta grab the wife, sell the ranch and move out here! Ride on, JR
Top

I researched that spot after your first post a while ago about the failed attempt to make it to Baldy Cinco in a dying wind. It looks badass and is great to have as a Plan B in case we drive over from Salida and Rito is dead. Thanks for doing the legwork and posting the sweet pics!
We may come down to ride if Saturday's wind predictions stay good.
Chris
Top
Post Reply
11 posts