I recently read a report from a guy that went splitboarding several places in Iceland last May. His post & pictures can be seen here : http://splitboard.com/talk/viewtopic.php?f=5&t=16105

Looking through his post I couldn't help but imagine the immense potential of snowkiting this amazing place. I can't remember seeing any posts on here from snowkiters in Iceland but I'm totally amped to go there now. The amazing thing is the airfare to get there & back is insanely cheap. $383 round trip from a nearby airport to Reykjavik. I need to do this - probably next April or May.

So - any kiters there in Iceland wish to share some their magical bounty? If you have pictures to share or video - even better but I'd really appreciate any info and help as I put this plan together. Thanks in advance.
Top

You probably want to check http://4people6legs.com/ which is a project page of snowkiting in Iceland. They have developed a rig for handicapped person(s) to join to tour. I attached a vimeo of rig testing.

You probably also searched your favourite search engine. Perhaps you could get a tip or two from here.

It seems like a lot of people visit there in May. How would the powder potential be earlier? Say April or late March? If there is a "Best" time to come to Iceland to kite and really explore the potential there what time would it be? Is there a month where snowpack is typically better? In the video above I love the commentary about the smoothness of the wind. Troll peninsula seems incredible.
Top

Hi guys. One of the locals answering here located in the Reykjavik area. Been snowkiting/kitesurfing around here for the last 10 years. There aren't many of us here maybe a group of 5-8 active kiters.

Every year is different now maybe thanks to global warming, but to be sure don't come until January the very first although we kitesurf almost every day of the year and snow came early this year, about a month ago, but could just as easily wash away with a good rain session.

You could always hit the glaciers, like the one in the video which I recognize as Langjökull around 200km from Reykjavik. It's really the only one I've snowkited on a few times.

The fact is that we have conditions in the country on par with the best locations around the world I think if you travel a bit (minus the heat of course!). But we are lazy. We can go snowkiting only 30km from Reykjavik backcountry of the local skiing area and our beaches - well, we can go out in every wind direction on a wide empty sandy beach within a 15 min. drive. If it's longer than that it's TOO FAR. We're spoiled rotten.

You're right, north of the country at Tröllaskagi is a place we've been talking about visiting for ages. We've seen it and been there but never snowkiting. It's heaven. But for us it's a 500km drive, so.... (remember spoiled!). You might be right march/april even May might be a good time. But then again you never know, usually you will get good wind but could get unlucky. Later on in the wintertime the wind usually settles more, so no violent stuff if your not up for that. Than again be sure to bring all your gear, although we usually get away with 10-12m foils and a smaller storm kite (maybe 4-7m foil).

I'll let the guys know about the thread on our local group in Facebook. One of them has been organizing trips to Iceland/Langjökull glacier for some years now.

hi, guys if you plan to come to the north, then im at the captial of the north, Akureyri just a few min drive to trollaskagi, perhaps I can help you in any way, I think im the only snowkiter in the north or at least only active one. i just started in this sport last year so maby i could learn something from you guys. so stay in contact if you have any questions robin@simnet.is

We did a trip 7 years ago to Iceland. Kited near Reykjavik 1 day then kited a bunch up in the northern fjords. Also used a sailboat to snowkite explore. We went in mid-late May. Yes, flights from the US are cheap and it is a quick flight. It is a small Island so weather comes quick and then goes.

Hit me up if you want more info. Maybe go back with you. Did you hit the Summit? 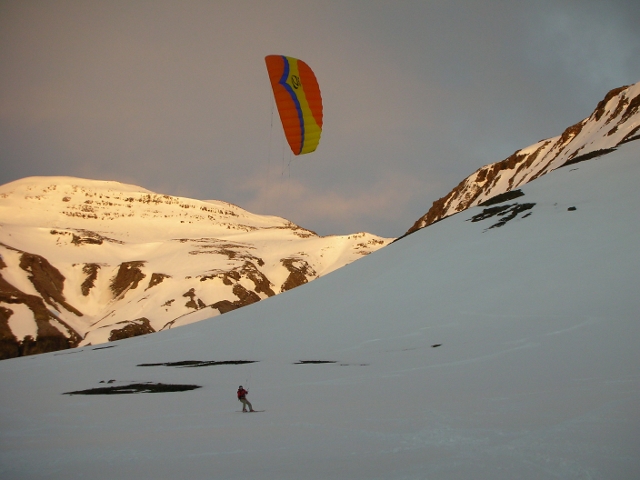 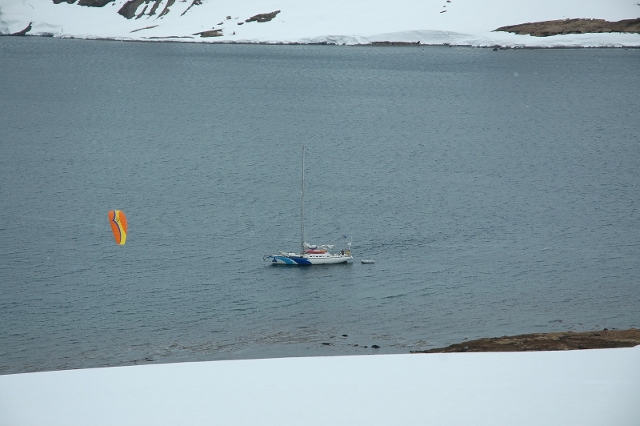 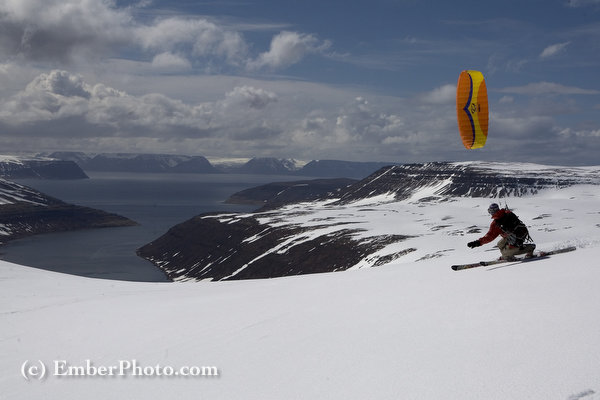 Oh wow. Iceland looks so beautiful. I definitely want to go one day...but haven't got enough money at the moment. Thanks for sharing the photos, Lewmt.

Geir & Robert - sent you pm's. Thanks for the feedback!

My main question since my timing for a visit there is open....is: What is most likely the best time to shoot for to ride powder? Here in Montana I'd say late Feb > mid-March usually serves up the best options but Iceland is an island, entirely different, with different weather influences, than here. Is there a seasonal aspect when the best snowfalls occur?

Thanks Luke! Great pictures. I know you are doing the AK trip also but it would be great to have company. I'm really getting stoked for this already.
Top

Ken I love the Tilman style sailing-kiting discovery expedition. I remember seeing that old telemark kite photo and getting excited to snowkite! Lew I hope you put together a really great adventure. Please take lots of photos for us working stiffs to enjoy--
Top
Post Reply
9 posts • Page 1 of 1