A rare event in Boulder, the kiting gods dumped 20" and sent us a SE thermal-like wind that made for a great afternoon 5 minutes from my house.
I'm in for the Flattops, Zack has my contact.
Wondering if Steve knows anyone with a sled who would be willing to pull us up and leave us there? With comprehensive coverage I'd be willing to endure the glide back down the road. 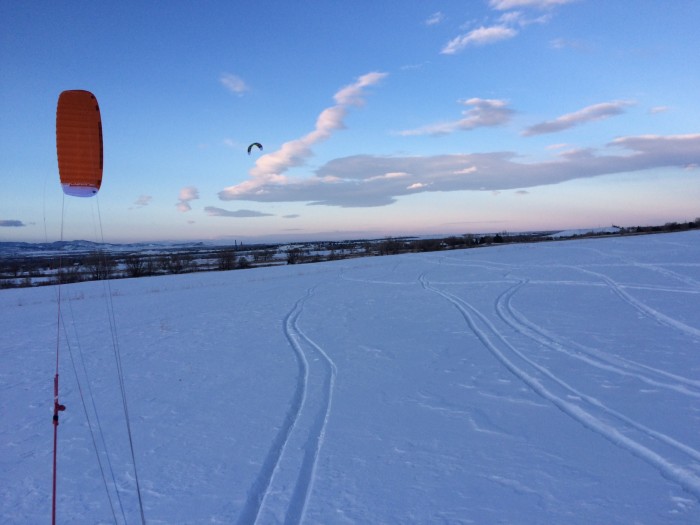 These photos are from the Southern Patagonia Icefield on the border of Argentina and Chile. I was lucky enough to go there in early October this year. It took two days of hiking and semi-technical climbing to get there. It was worth it. I posted some other photos and info on Instagram on @zaquesmyth if anyone is interested.
But hey my joke got people talking about the Flat Tops!
Maybe not as good as Patagonia but worth the effort. Two years ago it was a really low snow year and we were able to drive a 4x4 Tacoma in pretty far and then skin a flat road for an hour. I’ve also “hitchhiked” successfully on a weekend by flagging down people on sleds. It is very popular for that. And a quick ski back down. The reality though is that the FTs are so good but a sled makes it realistic. Just as cool as Skyline, UT in my humble opinion.
I haven’t been up there this season but I will post an update if I do on conditions/access.
I’m in Baja from Jan 1 to April 1 but if it’s a good snow year I’ll be hitting it as much as possible this Spring. I’ve had some great days there up until June.
Happy Hunting

008, unfortunately I don't know anyone with a sled anymore that could pull us up to the Flat Tops and leave us there to ski or snowboard down. I had 2 snowmobiles which worked great for the Flat Tops and Vail Pass (Machine Gun Ridge), but I sold both of them a year or two ago. So I'm stuck being a park and ride guy these days. Zack, you totally snookered me with your pics. I knew I'd never seen those incredible rock formations during my times on the Flat Tops, but I figured maybe they were just in a part of the Flat Tops that I hadn't been to yet. You got me for sure. Great pics regardless. Must have been quite the experience to kite there in Patagonia. I'm thinking about hitting the Grand Mesa this weekend if there's any decent chance of wind. Or anywhere else within reasonable driving distance from Gypsum.
Top

008, my dad and sister live in northern Colorado so I'm down there every now and then. I was eyeballing the big open soccer fields at Sandstone Ranch Park near Longmont recently when I was down there for Thanksgiving, but the wind gods weren't being friendly, so I bagged the idea. Looks like you had a great time there near Boulder. Looks like a really nice open field there, something not easily found around there.

Kited on Grand Mesa this afternoon. Fluky winds but got some rides on a 19m foil kite. Decent coverage, had to steer around rocks here and there, but didn't hit any that were hidden. Knee deep snow. Had to do some postholing when the wind died at the end of the day, but luckily I'd walked in from the road with snowshoes, so as soon as I got back to them it was no problem getting back to the car. Did the park and ride. Since it wasn't snowing, there were no snowplows out and therefore no problem parking along the side of the road. You just have to pull over against the snowbank as far as possible to avoid problems with the authorities and don't park along the road when the plows are out. Wasn't epic but it was fun.
Top

Yes Zack Not fair. But I'm willing to give it a try sometime and I can easily pull 2 other people. Got a slightly hard to start Polaris 600 switch back not truly off trail. But better than a trail runner. I'm still coughing constantly so best I'm going to be the cheerleader this weekend and yell from the sidelines. Have fun give me a call I'll be up.
Top 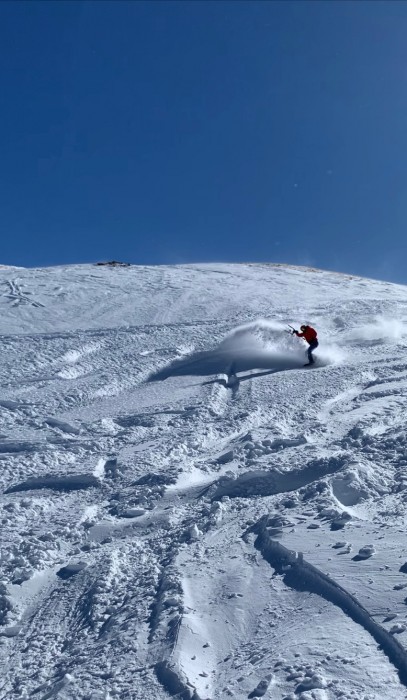 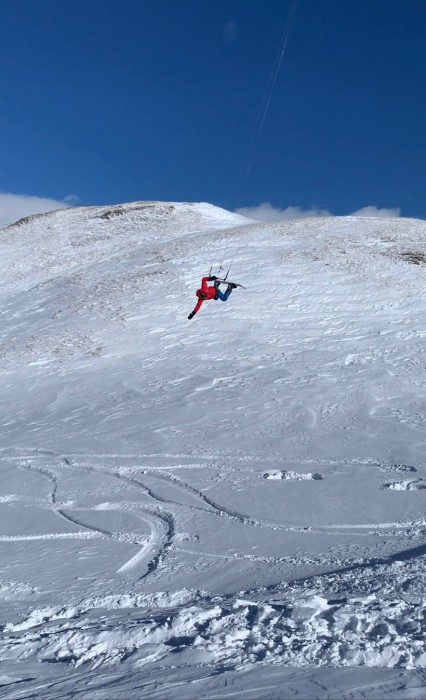 Looking good Parker!
What was the wind direction?
Mickey

This is a tale of two kiters. It was the best day ever

. It was the worst day ever

Set the stage
Grand Mesa forecast for Sunday is calling for winds at 3 MPH with gusts of 4 MPH, I think the forecast is wrong, if we go out to kite lake I think we're going to have a Katabatic winds that just might be good.
Saturday, So coming back from teaching a class on adaptive snowboarding at Powder Horn ski area, I stopped and checked the wind on top of the Mesa on my way home, not much

. When I ran into some guy who had just walked out over 5 miles of the Grand Mesa. Because he could not get his snowmobile started and unstuck. Lesson learned don't take a 1984 sled back into the deep outback with nobody to back you up or not even sure it runs right. And he had 2 of these pieces of ancient history with no maintenance. Not smart. So being the big-hearted guy I am I agreed to meet him at 11:00 am at Mesa Top parking area and see if I could help get his sled out. It turned out to be very anticlimactic : shot some go juice into his motor started in a few pulls and tied onto his sled to put him back on to the packed trail. Then we went and checked out Kite lake. Wind felt good, rode back to the Parking lot to meet Tom with his sled and Todd who I had planned on towing out to Kite lake when our rescuee offered up his extra sled for Todd. Awesome!!!!

Got back out to Kite lake to find some of the best conditions imaginable. Steady wind, gee I thought I was on the beach never had winds this steady. We were seeing winds at 10 to 12 mph. Conditions where TOTALLY UNTOUCHED POWDER AS FAR AS YOU COULD SEE. It was on average 12" to 16" deep. GO BIG OR GO HOME. MY PHILOSOPHY. I put up my 21 Soul riding my board, Tom put up his 15M, riding his snowboard, Todd blew up his brand new 15M, Sling Shot Turbine, Anybody who had followed my posts might recognize this kite its my first new kite that I bought 4 years earlier. Todd had struggled for years with sub par HQ Apex's and because he has used these kites exclusively. He had no Idea what a well performing kite feels like. Again intimidated by the size of the 15 and his interpretation of wind strength he opted instead to go back to his 10M Apex, with the Turbine sitting there inflated and ready to go.
Remember the beginning of this tale it was the best day ever!! I left my phone with my rescuee who decided to see what this kiting was about. He took some awesome pics. I'm guessing I put in close to 2O miles hit speeds over 25 MPH and had some of the most silly fun jumps ever. Todd said he saw me several times at 15+ feet. I ended it all by exploring all the way from Kite lake 1 to kite lake 3 over a three mile stretch that ended in my first ever long distance 2+ miles downwinder.
Remember this is the tale of 2 kiters. Todd had some kind of miss connect on his lines and never went more than a couple of hundred feet. Tom and I both put in 10 miles plus no problem Todd put in 100' and struggled all day. He is ready to quite. Saying he wants to kite to relax not to get uptight. Well flying JUNK can lead to frustration. Lesson learned I'm going to bring some smaller LEI's that fly well that should help with his anxiety for size. And I'm going to spend time with him until he feels comfortable. Todd and I have been adventuring together since 1984. He's saved my life and I've saved his, we are the best of friends and I'm broken hearted that he has not progressed as I have. I place most of the blame on the POS kites he flies. Sometimes outside things influence our choices and I know economics plays a big part in Todd"s choices.
Any way enough down stuff. I had the best time I have ever had kiting and Tom agreed. BEST DAY EVER ON THE GRAND MESA. The tracks I posted are my best guess where I traveled. Though not even close to the amount of tacks I put in. 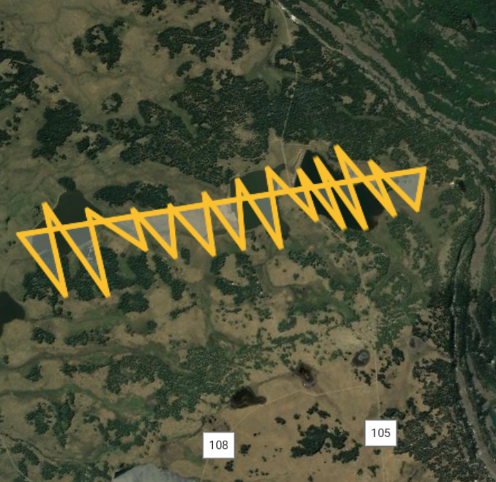 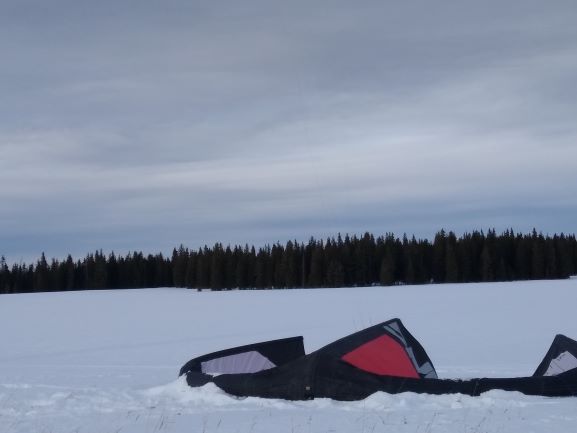 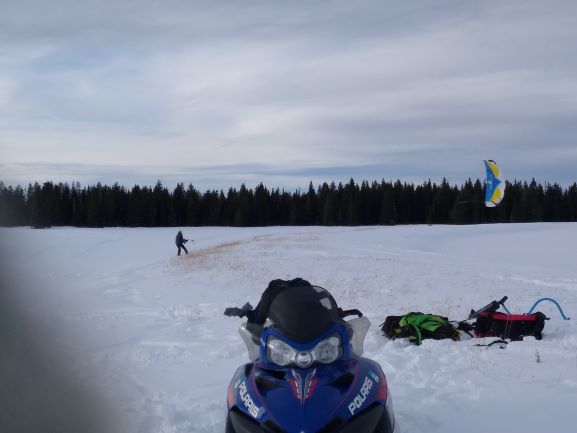 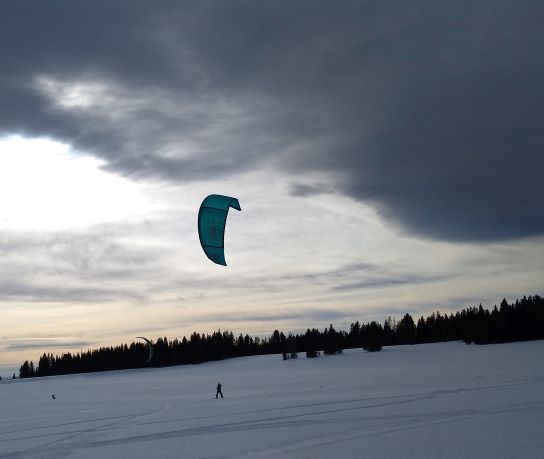 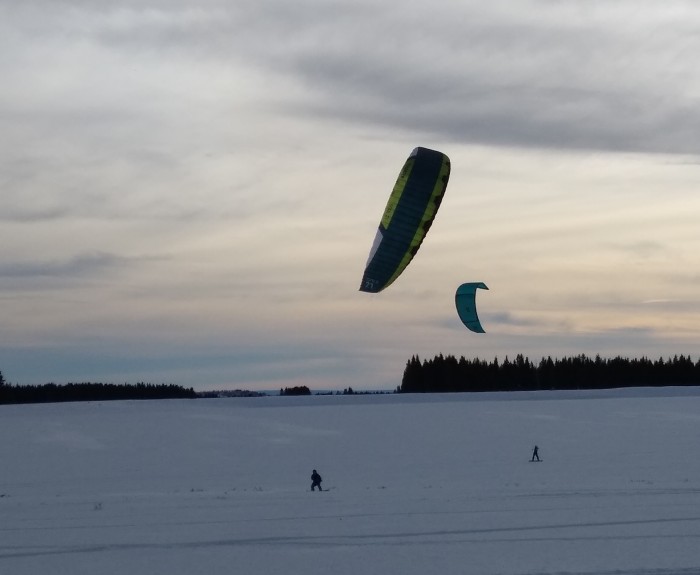