Can't help to much in the Denver area for places to kite, but quite a few places are represented on this Kite-o-rado. Snow Mesa and Jarosa Mesa are favorites for me, would be a long drive from Denver, well worth the 2 hr drive from Gunnison for me.
Top

The reality is that maybe the internet isn't the right tool to share locations. Land is managed by numerous agencies and regulations are not the same even if there is public access.

If you post a sensitive location, perhaps all the hard work that the locals have been doing will go down the drain. Why ruin something just to type up a post? Publicizing sensitive locations is counterproductive.

A community ethic on a forum is about self-regulating to preserve opportunities for everyone.

There is a difference between reaching out and taking someone kiting and just talking loudly on the internet and spoiling spots for other kiters.
Last edited by Sojourner on Sun Jan 03, 2021 5:14 pm, edited 2 times in total.
Top

Favorite Beaches: All the above!!
Style: Still learning
Gear: Just purchased used gear from instructor
Brand Affiliation: None
Has thanked: 0
Been thanked: 0

So sorry! Appreciate and respect you taking down post.

Thanks for your attempt Steve In gypsum
Top

If a sensitive spot gets noticed by Google searches, then you can bet that your awesome days at that spot may never happen again. We can share awesome days online without naming the spot. People crave unknown spots because of "fear of missing out" on some private secret knowledge- it's a weird human trait that we all have.


xyz wrote: ↑
Sun Jan 03, 2021 6:42 pm
Sojourner... you're more interested in hiding that information than sharing it. Your previous post states that if someone posts about a sensitive location, perhaps all the hard work that the locals have been doing will go down the drain. I'd be very interested in finding out exactly what "hard work" you've done in that respect.

If land-managers have to have a meeting about a fringe activity that looks like hang-gliding to them, it's easier to shut it down and get their ticket book out than write up a user plan. Unfortunately, there are real politics. It was news to me, too.


xyz wrote: ↑
Sun Jan 03, 2021 6:42 pm
Sojourner, I disagree. Snowiters who ask not to talk about sensitive locations remind me of surfers in California who treat every beach like it's their own and slash the tires of anyone who isn't "local" who tries to surf "their" break.


There are really snowkiters roaming CO looking for other snowkiters so they can slash their tires? Wow, sounds frightening out there...

I know you love to kite, and hopefully you can now feel a bit like I'm actually on your side. We're all in search of awesome snowkiting days.

I've learned that even the biggest, most desolate places can get me in big trouble. I had no idea. One spot has a regulation of "No wind powered..." Believe it. However, that same spot has some kiters because they assisted with some maintenance for an official. His statement was "I've seen you guys out there and am pretty sure you're not supposed to be doing that but at least I know you now..." It's a one-on-one thing that could be taken away in a flash if other kiters make assumptions.

I agree that snowkiting is the most innocent thing you can do and "no none should give a damn" as was said earlier. I didn't even know I could be doing anything wrong. Then I had an incident at one of those places where "no one gives a damn"; I was watched with binoculars, staked out, stopped and told I was doing manned flight (and I don't even boost over ice) and essentially was looking at a ticket that equated to LANDING AN AIRPLANE on the reservoir. Holy Crap. The guy who has the book gets to write whatever ticket he feels and then it would be on me to go to court to get it reversed. He must have said "if I ever catch you again..." like ten times. "Go tell your buddies and whoever else does this that I'm here waiting..." Just thinking about the prospect of defending myself in court was a massive burden. In retrospect, I realize that field office probably go a memo to enforce against kiteboarding, had a meeting about the memo, and this was combined with an overachieving "trooper" who was going to ensure he lived up to his duty and was on a mission to stop anyone and everyone.

Darcey's profile showed she is still learning. Lake Dillon is legal, gets as much valley snowfall as anywhere, and there are kiters to meet and other things to do if the wind doesn't come up. Posting about alpine locations with multi-mile approaches or desolate ice patches with 3" of crusty snow and a land-management issue isn't what she was asking. What did happen here was a list of place names was posted that might give other kiter's a negative experience.

Some of us do like the wild ethos of exploring around on kites without doing what everyone else is doing. We keep a low profile and don't enjoy the loud mouth "show-offs" at sensitive spots because getting noticed equates to getting it closed forever.

Hopefully that scratches your itch as to what may actually be going on and why you think other people appear to be acting selfishly. In an age of Instagram Influencers and FOMO, it's not worth using the internet to spout off about location names that might give you or other kiters tickets.


you're more interested in hiding that information than sharing it.


Some of us have style and secret spots that just can't be matched. Who wants to know the locations

Dillon is the first place to go and it will save the park-n-ride kiter a lot of confusion. More than likely you'll meet other snowkiters there. Concerning other locations, the attached reference sheet has some helpful information on limitations and issues that kiters have experienced.

Access at lake Dillon was worked out for that spot through a series of political meetings. Other large reservoirs and lands don't have the same status.

(snowkiting is often taken away and rarely approved.) 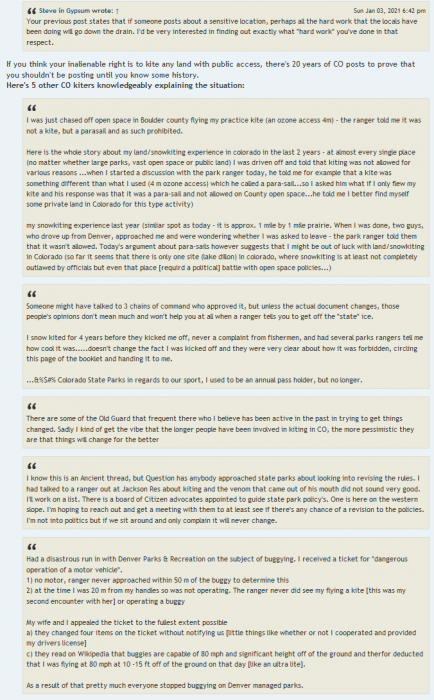 After giving a lot more thought and consideration to the comments that Sojourner has made about access issues, I'd have to agree with him. My previous comments to him were irresponsible and inflammatory and I apologize for making them. Live and learn in this age of social media that popping off before thinking is usually not a wise thing to do. I hope we can all work cooperatively on access issues for this great sport of ours going forward.
Top

Hey Mickey, I managed to hit a few good spots on the Sea of Cortez while heading south. We've been in La Ventana a while now and the whole family is having a great time (except for all the powder we're missing). My wife says we're staying here til she can ride both ways staying upwind! We'll be back for spring corn season so save a little for me. Cheers
Top
Post Reply
570 posts