Pete….I'm in Florida in Feb and looking forward to no wetsuit and not missing the snow either. Water will always be king, but when things really line up…and I mean really line up, there are and can be some pretty amazing winter spots and conditions. Admittedly though, it might be one of two sessions a season that are noteworthy. Water same thing though. I like pushing the height in water. Can't do that on snow. In the winter I like to use the terrain - can't do that on water.

Love snowkite! Here on Wolfe IslandOntario its all flat frozen bays where we ride. Any time I venture to a field it seems shitty gusty no matter what. Whereas the big fetch from the lake in a bay can be super smooth wind. Add some powder and it the butter slick session of the year. On my bucket list thought I want to get to something you guys have a skyline....3d!. That must be so much fun.
Top

Think about it. The more fringe it is the better it is for you...... Tell people it is horrible... nasty... painful and expensive!

We experience a similar thing here in the winter on the water. The storms role in the swell gets big the wind is gusty and howling. kitesurfing crowd thins down from 30+ on a good day to 10 or so hardened guys.... The real kiters.
Top

Yes, kiting on the water is much, much better!

It is sort of odd though that more people are not as exited about it. here are a handful of guys here that love kiting on the snow as much as on the water...me included. It's sort of like sailing (boats)...I used to think everyone would love it as much as I do, but in reality a large percentage of people have their fill after a few wet cold outings on the water and don't keep up with it...I think a lot of people have the false impression that snowkiting is miserably cold or something??? But in fact I've rarely felt cold while snowkiting.

I enjoy riding waves more than flat water, so it might follow that I prefer riding terrain more than flat snow/ice surfaces...but they can be fun under the right conditions too. Of course I would rather ride in the mountains and cover huge changes in elevation. We have a few good spots with fun terrain but nothing like the Rockies, Sierras, or Alps unfortunately...but we make fun with what we have.

To be honest....and not to sound selfish...it does not bother me that fewer people want to snowkite, because some of our spots could become "crowded" if dozens of people showed u on a regular basis. And then there is also the issue of "private lands" where a few of us have gotten access from friendly property owners...where too many people could make them less comfortable with people all over their land...???...I don't know.

I would also say that snowkiting here in MI can be a lot more "hit or miss"...with the exception of the epic winter of 2013-14. We need just the right combination of snow, ice, wind to have a good session here. Sometimes our window for sessions only lasts a few days. Sometimes it is too windy, or not enough snow on the fields, or no snow on the lakes....so maybe some people just don't have the level of commitment to it for that reason...plus shorter daylight hours, difficult driving conditions, etc.

There is also something about snowkiting that probably not eveyone appreciates...that is the quiet, serenity and solitude that you can feel when you are out there virtually on your own on a winters day in the wind and snow...it's different and obviously not for everyone...but it's really beautiful and peaceful in a very special way...and it sure beats sitting around doing nothing!

It's an interesting question. From my perspective the answer is definitely "no."

If you love to ride water you probably live in a place where water riding is easily accessible. You probably aren't in an region where there are a lot of snowkite options. And travelling a long distance to ride an unknown area in unknown and possibly life threatening conditions (ice is a gamble if you don't know an area) isn't worth most people's whiles. Snowkiting is hard. Anything gets harder to do when it's cold. It requires a lot of dedication and knowledge to do it proficiently and be comfortable doing it.

Interestingly of all the people I know who snowkite, none of them are on or follow any forums and only a few ride water occasionally in the summer. They head down to OBX etc. But I don't know anyone that I ride with would agree that would agree that water riding is better. We find it funny when a water rider poo poos riding a frozen lake because there's "no terrain" when in the warm months most of them are trying to find the flattest water possible.

I suppose it depends on the region. Though it seems as a segment, compared to pre-2008, participation seems to be fading. PASA abandoned it back then and now IKO finally gave up on snowkiting. Americans don't embrace it like they do in Europe IMO. And the liability climate may be part of that. Also, it helps to be a good skier which there are few of in the kite surf world because of that whole regional thing.

Locally we've had some riders fade away but we've had more riders come into it.

All I ride is snow and ice. I'm a skier in New England and that's what we do. If I had good water to ride I'd be psyched to ride it but the ocean is an hour away and I baby my kites. The idea of salt water and sugar cookied kites makes me cringe.

And I have to agree with Roberto. Less crowded is fine with me. If I want to ride with people I'd go back to lift access skiing.

And I'm a sucky swimmer.
Top 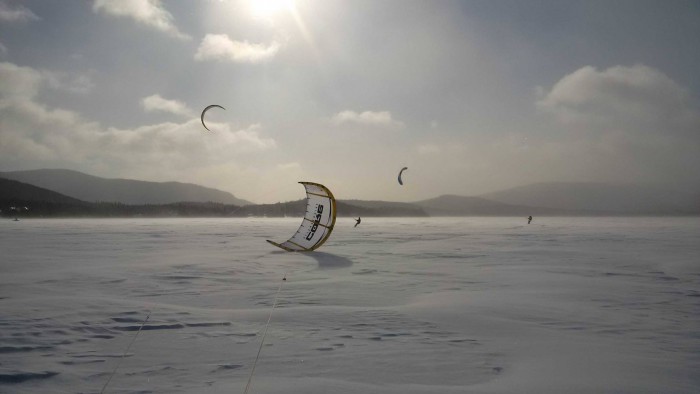 From here snow kiting looks sweet. But I just get to see the video. However, on my last trip to the mountains, I found it much more difficult to get conditions to line up and ended up just getting lift tickets. I spent years chasing wind to kite on water. Now that I live with good wind, I can't imagine driving and getting skunked. Next ski trip for me is probably in 2016. Maybe next time we will find a place with better snow kite locations near by.
Top

Generally speaking if it's windy you can get out and ride water with little to no effort. If it's windy and you want to snowkite it can be a bit more challenging. You need snow, and good snow, but not too much snow. If you can't access a large field you need ice. That means waiting for the ice to set up and then waiting for a good snow storm (some love the speed on polished black ice, I'm envious of them but not one of them).

In New England this literally means conditions change daily. If you are a beginner and catch it on the right day you may be hooked. Pick the wrong day and you may never venture out again.
Top

fernmanus wrote:At my local spots (Skyline and Strawberry, UT), I have noticed far fewer kiters. This despite ideal conditions. It used to be that I was always guaranteed to ride with someone if I drove to Skyline any day of the week, but I have had solo sessions in epic conditions. Not sure what is going on?

I would agree with NHKitesurfer that Snowkiting is more variable conditions and things need to line up better to make it work based on yoru desired style. I would also highly argue "ideal" conditions. Maybe Skyline, but thats a 2.5 hour drive for me so I dont go there. I would argue that its more weather / wind / snow conditions for the 2011 - 2014 drop off. I live in Park City (hence why I go to Strawberry) and the last three years snow fall totals, as you prob now, have been down in Utah. This year is especially bad. I went up to Strawberry yesterday and the wind conditions sucked - the snow was baked out crud and the snow pack is weak. I feel its conditions related - not desire. Hang in there... all we need is a couple storms and the jet stream to cooperate (but feel like Ive been saying that the last 3 season

But don't worry... Rush lake should be good for water kiting in Early April!