snow kiting - which is better? skies or board?

Nem0 wrote:
You did your first flite with a Sonic2 from flysurfer?
Wow

Sounds like this is a all terrain kite for all levels

Initial snowkiting lesson was with Ozone Samurai 5m which I lent and flew a lot.

My first own kite was Flysurfer Speed3 19dlx on which I started snowkiting on skis and next summer water kiting. So when I went to water I only needed to learn board control.
Top

A. It is easier to learn kite control on skis and you fall down less with less force (on your backside). Time skiing on a hill is very important to getting some feel for edging skis (though rollerblading or ice skating can give you an idea of what to do).

B. It is harder to learn kite control with a snowboard, and impacts (to your backside) are more severe, but edge control makes slightly more sense with out time on a hill.

That said, learning the entire sport of kiteboarding is actually easier on the snow than the water, because you can stand up and don't need to learn how to water start.

Bam! Yup, that makes skis easier to learn to kite with.

But you are "waterstarting" on a snowboard. You go from sitting to standing with kite power. Pretty much the same motion. Only with skis, is the statement in red valid. That said in snowboardkiting, a "water start" is slightly easier on hard snow as opposed to in the water, but slightly harder on deep soft snow as opposed to water.

But what edt is pointing out, is that you will not learn to fly your trainer kite at the same time you are strapping on a snowboard for your first time. I would definitely suggest learning the kite separate from the board/skis for at least 5 sessions each. Then trying to put them together.
Top

We are going to be in the Front Range area late Dec and then up near Glenwood Springs first few days of Jan. Used to live out there many years ago, and from what I remember seems unlikely we will have snow for kiting that early, in that area. On the off chance we get lucky, my smallest kite is a 10m, is that suitable or do I need something smaller? And any outfits in the area that will give lessons / guides for good areas? Been kiting in water for years and reasonably competent if not very adventurous.
Top

You never know and there’s a storm in the mountains tonight, 2 - 5 inches, they closed I70.
Top

One advantage that snowboarders have over skiers is when gliding.
Gliding is easier at first facing backwards with the wind at your back like on the water. However, in gliding you aren't going sideways to the wind, you're going into it.
While in the air it doesn't matter whether on a board or skis, but landing on a board only requires a 90 degree turn of your body to land, but with skis you have to turn 180 degrees to land. That requires that you set up the landing with a backstroke that gives you torque against the lines to swivel your body around, then downstroke back out to land.
However, the far classier glide landing is a kiteloop back into the slope, for it propels you straight back up for another run. Here skis are an advantage over a snowboard, for no swivel is necessary with skis but a snowboard requires a 90 degree swivel to land straight when coming in hot.
Top

Easy, skis for hard conditions and exploring the terrain, and snowboard for freestyle

john a wrote: ↑
Sun Nov 19, 2017 9:16 am
Easy, skis for hard conditions and exploring the terrain, and snowboard for freestyle

And snowboard for riding on features like deep holes and roadside piles.

I am not the best kiteskier, but I know from watching other kiters on skis, who are better than me - a snowboard (me) can take gnarly features better than ski's.
Top

Hey knot_moving. ( We are going to be in the Front Range area late Dec and then up near Glenwood Springs first few days of Jan.) Call me or message me I'm fairly near Glenwood, about 2 hrs, and would love to show you our mesa. An 11 should be fine and I have several snowboards you would be welcome to borrow.
Top

Oh, i gotta clarify that. I tested (and bought) sonic2 ...........Slowish turning and pretty stable. Though they still can accidentally jump big..


You don't know "Slowish" turning unless you grew up on the Flysurfer "Speed" series. I do not have extensive experience with the "Sonic's", but they were Flysurfers answer to the Elf and and Ozone "Chrono's" that revolutionized the foilkite industry. I would actually blame Flysurfer for holding back large size foil performance with the "Speed" series. Ozone really hit the nail on the head with the "Chrono 2" and set the bar many times higher for performance of large foils. At the same time, these new kites pretty much killed the "Speed" series - at least for those of us that have flown them.

Just a note, HQ had a level of performance not available even with Ozone back in 2011. The original Matrixx 1 has almost as good free ride/freestyle performance as the "Chrono 2", though the Matrixx did lack the racing capabilities. THEN the Matrixx 2 came out, and the performance was reduced to being no better than the Flysurfer "Speed" series. HQ could have beat to Ozone to market if HQ would have just continued to develop the Matrixx series off the first version instead of copying the Flysurfer "Speed" series on the second version.

I am so far off topic that I may as well continue and reference another thread - THAT IS WHY YOU CARE ABOUT YOUR DESIGNER! They can really f--- things up if they are too scatter brained, or are not forceful enough personalities to go up against the corporate hacks that inevitably destroy kite model lineage through their focus on sales, profits, and "bling". A designer must balance R&D for the best new designs AND make sure they are not stuck in a rut, nor working backwards.
Top

I created this chart as an answer. Skis vs. snowboard is an individual choice, based on style and abilities, terrain, purpose, and surface conditions. I hope this will help. If anyone makes any suggestions, I would be happy to add them to the chart. 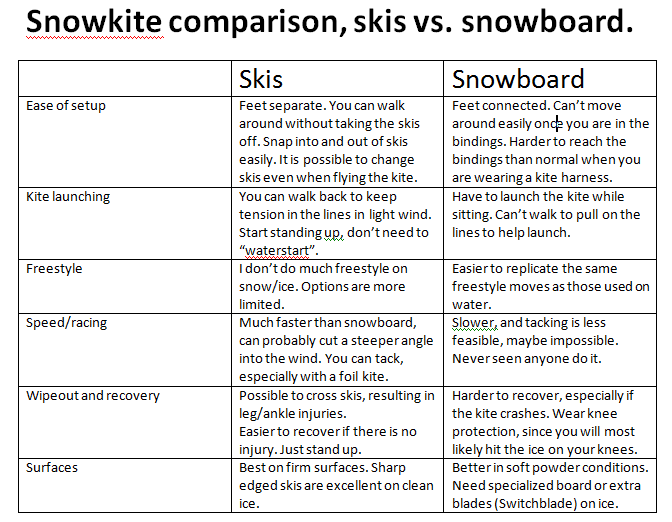 I do both, usually depending on the conditions. And I have a variety of skis for different surfaces and styles.
Top
Post Reply
31 posts