Ok the baby is no longer quite so pristine.

I'll try to keep this on point as possible. 1st I attached the flying lines to the kites bridal/mixer in my shop. With manuals on line I didn't catch the fact that you loop the larks head on the flying lines over a metal ring on the end of the bridles. But a quick call to Flysurfer USA got me going in the right direction. I had a hard time inflating the kite in low winds ( I can see where a battery leaf blower could come in real handy). Realize all this is happening while slogging through 2+ feet of powder. Mistake 1 nobody to help me launch. I had company but they were kiters from the front range and Vail and where just trying to score as much powder as they could and I didn't ask for their help. So finally got it semi inflated and off the ground. With nobody helping me I didn't realize the bridle was tangled. The Soul backstalled pretty well even with a well tangled Mixer/bridle. Because of the sheer size of the 21m soul the bridle lines are ridiculously long. It took me at least 30 minutes just because of the length of the lines and my unfamiliarity with the kite to get everything set correctly. So finally having it set up correctly I started pumping the leading edge lines to get the kite to inflate. Off the ground it comes. Now due to my being unfamiliar with it I had setup the depower strap to max depower. Problem 2 overflying Big time. Which lead me to quickly adjust the power up so I could pull the bar down and effectively back it down from so far on the front of the window. I'm thinking I need to fly it more rather than letting it just hang there. The flying over occurred several times but never lead to a Hindenburg. The Big question!!!! How did it work. Well let me tell you as I was pushing thigh deep powder out of my way moving at up to 20 Mph with only winds at 10 to 12 mph. I would say it worked well. I never felt dangerously overpowered. Even though the lift was ridiculous. One time while sitting on the ground tweaking my bindings the kite started to overfly again. I pulled in the bar to back it down. Well instead of backing it down it picked me up from a sitting position in the snow to 4 feet off the ground. As advertised the depower works very well. I pushed the bar out and settled back to ground as if it was a feather bed. I miss the backstall strap. While trying to get the kite to initially launch I thought I could do a better job off my board. Mistake 2. Trying to strap into a board while flying a very powerful kite was an object lesson in frustration. A back stall strap would have allowed me to strap on my board hands free with the strap hooked on my chicken loop hook, instead I had to hold the steering lines in one hand while trying to strap on the board with the other, very Hard. Finally as advertised LIFT, LIFT, LIFT. One small gust, good speed, still trying to figure out jumping, 10 feet of air. I'm excited to figure all the ins and outs of this kite. 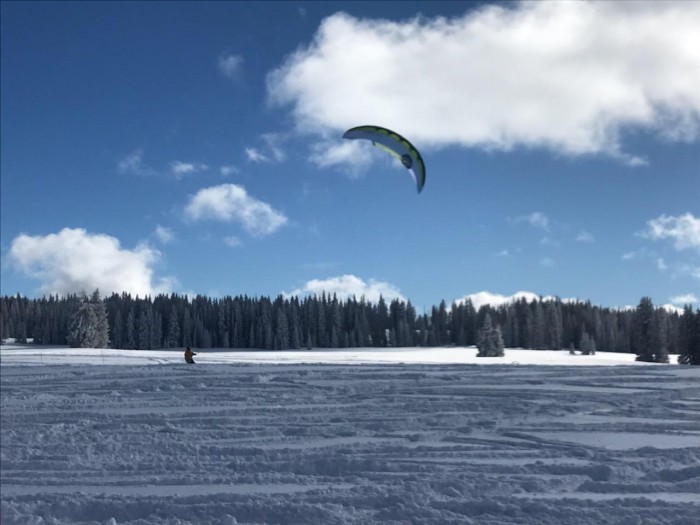 You do need a method of sorting your lines and inflating the kite each time. It saves a lot of time to be methodical and you are correct that you should ALWAYS put the board on before launching the kite.

Yes, the Soul is not a kite that you can statically fly if the wind is puffy. You need to actively steer it or bring it down. If you miss the back stall strap, the kite will work just fine with an Ozone bar.

The lift is crazy and it requires adapting your riding style in more powered up conditions. If you want to boost high, get speed going downhill and carve against the kite then send it. You can go a lot higher than 10 feet in 10 mph. Depending on the slope of the hill, it is easy to do 25+ feet high and come down softly, the only problem is that it can be panic inducing at first because it takes so long to come down, just don’t make the mistake of extending and locking out your knees for landing. It is easy to do with the 21.

The cool thing about the 21 is that it opens up terrain that other riders cannot touch - windshadowed areas which are often powder stashes. It allows you to cover more terrain and rocket up hill instead of slowly looping up. Flew mine today, I will try to post up video tomorrow. Have fun!
Top

Okay here is a brief video from last week at Strawberry.

Was that first part of video sped up because it certainly looked so?
Top

I would love to have that kite in my arsenal...especially after watching the Strawberry video. I dread to think of how much it costs but ya only live once right? Keep dialing it in Anthony and keep up updated with your thoughts.
Top

Was that first part of video sped up because it certainly looked so?[/bquote]

I have to ask The same question ¿? Was it sped up? The speed that Kite turned seemed twice as fast as mine. Was it a Soul or a Speed? And oh my!

I wasn't sure you were going to come down. Incredible! I'm going up again today. Wind forecast is light

I had some problems with CDOT (Colorado department of Transportation) on parking. Hopefully they won't chase us out today. We are parked a good 1.5 feet off the white line and they made us move for snow removal??? Less than 2" under our tires. I've never had a problem before I hope one is not starting. Think us some positive thoughts!

Even before I got a chance to post fernmanus called while he was in the car heading to Strawberry for another session. Yes the video was sped up. He said watching that 21 Soul turn loops is like watching paint dry!

Nothing epic to report on my session. Put 10 miles down. But the most poignant impression I came off with was watching my friends struggling on a 14 and a 11.5. I (Literally)

had no problems moving around until the wind totally died. Unfortunately I was a half mile away from the road. Some Snowmobilers saved me from the walk of shame! Cold beer for them.

As far as the 21 goes, I still had an Epic struggle getting it to inflate. Fernmanus gave some tips that helped but I still need to dial it in. Oh and no problems with CDOT.

Probably hitting the Mesa Monday if anyone wants to join me. Winds look really good

One last thing to add. Well that is actually 2 Turbochargers that is. I had this Idea from a suggestion of Fernmanus to use the dump valves to help inflate it while sorting out lines and kite. The problem I ran into was keeping them open. Hence turbo chargers can't wait to try them. Soul owners tell me what you think?
Top

I hope you can get things sorted out with CDOT!

I like your “turbocharger” idea. What is the material?

You will get it dialed in, don’t hesitate to ask questions.

Here is a glide from yesterday on a 12m Soul, same hill as the other clip I posted. The entire clip is at actual speed. The 12m just rips me up the hill. The trip down was much faster, on the 21 you often wonder if you are ever going to come down.

5 gallon plant bucket sliced in 4" wide strips, then cut the strip a little bigger than the circumference needed. Rounded and sanded the strips. Best of all takes up little room and fits in the bag.
Last edited by Anthonyshopguy on Mon Jan 28, 2019 3:22 pm, edited 1 time in total.
Top
Post Reply
48 posts