The most ironic image in the history of kiteforum. Especially when posted by elguapo
Top

This is a hypothetical situation:
Let's pretend that "climate change caused by humans" had never been mentioned or discussed by anyone in human history. So there was never any discussions or media attention or anything in history talking about this.

Note: I'm not asking anything related to climate change in the real world. This question only relates to this hypothetical situation.

It's a legitimate question but, for me, one you can't answer. The only people who could are the elitist pimps of the"science". The pimps who have positioned themselves to extricate spectacular profits from everyone else's compliance to the changes proposed. You see, for me, much of the hypocrisy which is boldly evident to anyone caring to see, is quantifiable evidence of the gross hyperbole prevalent throughout the AGW argument. When the elitist leaders, who expect stringent lifestyle changes from all of us in the masses, live every nuance of the lifestyle they wish to subject the rest of us to, I could be swayed. Instead, I see the pimps living lavishly. Jetting, yachting, driving themselves throughout the world as if they are immune, too elite, too sanctimonious, to accept a lifestyle we are supposed to be willing to live by. Additionally, even if the pimps on this forum were to live by such stringent lifestyle, why, you wouldn't even be here. You wouldn't kite(kites, boards, & gear are made of petroleum based material), you wouldn't travel beyond any location your own 2 feet could carry you.

Hypocrisy is so repugnant!

I'll believe when I see by the actions of the doomsayer's there is something legitimate to fear.

I'll believe when the evidence starts to be born out by results. Instead, until now we've had years & years of catastrophic predictions and forecasts which have not come close to coming true.....so......the rhetorical goalposts just keep moving.

Firstly, thanks for your answer. Despite not being able to give a full answer, it's refreshing to read a proper attempt at answering my question in words without silly images etc...

I would like to understand why you don't think this can be answered? Don't you think that enormously wealthy companies such as Shell/ BP, and countries with vast oil wealth would be paying scientists to disprove the climate change which you claim to be bogus? Or do you think that these companies and oil rich countries are also joining in the climate change conspiracy for some other reason?

Or perhaps these oil companies and oil rich nations have already produced genuine science-based studies from credible scientific peer reviewed sources? If so please show me the reports and their credentials etc...

P.S. I'd love to hear some more answers and opinions written sendibly similar to lewmt's (not the meaningless child-like crap that others post).
Top

dave1986 wrote: ↑
Thu Oct 03, 2019 8:26 pm
...Don't you think that enormously wealthy companies such as Shell/ BP, and countries with vast oil wealth would be paying scientists to disprove the climate change which you claim to be bogus?..

They do. However, keep in mind that the green blob became also quite big lately, and they are very interested to keep the government gravy train rolling. No, not big by any reasonable measure, such as the amount of energy produced per employee, but big in terms of the number of people employed. That's right, the green sector is essentially jobs program, and the amount energy produced per $ invested is much smaller than in fossil fuel industry. Why the amount of energy produced per each employee is important? Because this is the measure of how efficient the industry sector is and, consequently, how much you could pay to the employees.

Not convinced? If all those wind turbines and solar tiles is such exciting thing, then why the pay in this sector is so miserable? To be more concrete, would you afford to kite if you were employed as a solar roof installer, or those poor solar salesmen in the Home Depot? Therefore, you think that you are creating the better world, but the history is full of examples of good intentions leading astray.
Top

We were executing people for climate change in 1600's. Today we see politics of personal destruction, firings from universities, legal bullying, doxing, withholding of funding etc. I experienced some of it right here. For now no executions but I heard calls for imprisonment of skeptics. Hollywood elites though, joke about assassinating the president skeptic and I don't find it funny, especially with no reaction from the media. I am referring to Climate Bolsheviks. Not much changed since 1600's if you think about it.

elguapo wrote: ↑
Thu Oct 03, 2019 11:54 am
you're basically asking what would it take for someone to believe in santa claus... or the flying spaghetti monster.
your non-sense question was treated seriously.. meaning more info/background is needed.

no one has been able to build up a compelling argument on how humans activities are responsible for climate change... folks that tell the truth are not going to do your research for you.

this has been written repeated....and prominently
...and has yet to be disproved.

why?
i'll make it easy..
YOU CAN NOT DISPROVE THE TRUTH.


all the hippie and snowflake commie types can do is build scarecrows and attack messengers..
that's it.
that is literally the only argument for global warming in this tread: shooting down whomever speaks the truth.


for the ozzies that to want verbally attack the USA ....you should stop.
google "Kokoda Track Campaign".
the british lost singapore...and there was no help coming
if it wasnt for the sacrifice of americans in the pacific and the fighting of god fearin'/steak eating texas boys in particular....australia would be a japanese slave state right now.

USA helped save your nation's ass..a little respect is not too much to ask.


Pi.s off mate, I am not an Aussie and cercantly do not speak in anyones name.

Im a proud Mediteranean blood, thanks for asking. That Europe u Yanks so despite. Sadly, the same Europe dying off coz of Yanks defending the US interests in the Middle East. How convenient spinning a new GFC as we type this. All for that little oil left. Nice.

Re respect, u are MattV at the and, are you

you do know what oil is right?
is a NATURALLY occurring mixture of hydrogen, carbon and oxygen..
the "peak oil" theory is yet ANOTHER lie...
i know you and most folks in generally prefer the "blue pill"... so i wont bother posting information you wont bother reading. (you can google "peak oil theory debunked" yourseld.

what next?
will you boldly state that diamonds are actually rare, a worthwhile investment or a anything more that a common hard rock?

i feel for ya..
being lied to your whole life and having things youve always held as fact in the world.....to be completely untrue.

Re respect, u are MattV at the and, are you

I think after you disgraced yourself with recent and totally inappropriate posts, you've opened this account, did you?

Ha ha, Im sure there are heaps of diamonds and we WILL dig deeper and deeper to get them, leaving a huge hole like this one:

"The Centralia mine fire is a coal-seam fire that has been burning underneath the borough of Centralia, Pennsylvania, United States, since at least May 27, 1962. The fire is suspected to be from deliberate burning of trash in a former strip mine, igniting a coal seam.[1]

The fire caused most of the town to be abandoned. The population dwindled from around 1,400 at the time the fire started to 10 in 2017, and most of the buildings have been levelled." 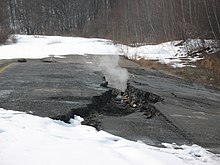 "View of smoke rising through a fissure in the ground in the closed-off area of former Pennsylvania Route 61. The melted snow, which covered the ground around it, shows areas where heat is escaping from the ground below." -WIKIPEDIA

NO, THAT DID NOT HAPPEN DUE TO A HUMAN ACTIVITY

I apologize to other readers about this style of my post. Never the less, the HUMANS caused burning this coal mine for another 250 years. And we are discussing did humans do this or that. At global scale, this coal burning might be irrelevant, but for the local people it was an Armageddon.

We have no idea what fracking, mining, etc etc does to this Planet. But it's definitely not good.
Top

dave1986 wrote: ↑
Thu Oct 03, 2019 8:26 pm
...Don't you think that enormously wealthy companies such as Shell/ BP, and countries with vast oil wealth would be paying scientists to disprove the climate change which you claim to be bogus?..

tegirinenashi wrote: ↑
Thu Oct 03, 2019 11:04 pm
They do. However, keep in mind that the green blob became also quite big lately, and they are very interested to keep the government gravy train rolling. No, not big by any reasonable measure, such as the amount of energy produced per employee, but big in terms of the number of people employed.

So you're telling me that the oil rich countries are using this reason too? And you're also telling me that every single oil company has decided to let this "scam" happen because they would prefer some government funding than to sell oil?

tegirinenashi wrote: ↑
Thu Oct 03, 2019 11:04 pm
That's right, the green sector is essentially jobs program, and the amount energy produced per $ invested is much smaller than in fossil fuel industry. Why the amount of energy produced per each employee is important? Because this is the measure of how efficient the industry sector is and, consequently, how much you could pay to the employees.

I think you'll find that you're wrong here. The cost per unit of renewable energy has dropped significantly in the last decade and is now very much competitive and in many cases cheaper per unit of energy than other types energy generation including the burning of fossil fuels.
Top

I believe the scientists for the facts and its f**king alarming , but as I said before my time is too precious to spent time to convince anybody -if somebody doe'snt want to see it , then that's their choice , but the saddest part of that is that is future generations , they won't have a choice
Top
Post Reply
2001 posts