Having never skied I don't know too much about it. For kiting what type of ski would you prefer or what would work best? I have a set of cross country skis but no boots to go with them and from what I gather cross country skis probably wouldn't work to well with a kite.
Top

It depends what surface you plan on being on (ie. Mountain snow or Lake - ice, hard packed)
We are on a Lake and use second hand old ski's that we don't mind abusing. All you need is a good edge and bindings that work.
Buy a pair of used skis (edges, bindings OK) and boots and your good to go.
Also learn how to sharpen your ski edges (YouTube)
Top

Would suggest learning to downhill ski first. Trying to ski with kite and no experience of managing skis will be very hard. You won't know how to turn. You might be better off with snowboard, but others will have to advise.

Cross country skis definitely not what you want as you cannot edge hard with them to go upwind. I use normal downhill skis. Touring open up more possibilities as you can walk out of should wind die. However they slightly harder to manage and compromise binding release. I would therefore recommend you start with downhill skis.
Top

irwe wrote: ↑
Tue Oct 27, 2020 10:27 am
It depends what surface you plan on being on (ie. Mountain snow or Lake - ice, hard packed)
We are on a Lake and use second hand old ski's that we don't mind abusing. All you need is a good edge and bindings that work.
Buy a pair of used skis (edges, bindings OK) and boots and your good to go.
Also learn how to sharpen your ski edges (YouTube)

This is good advice. In addition to this, if you are on lake ice we use skis with very little turn radius. I'm on downhill skis with 50m radius and some are on the old school "full lenght skis" from the 80's that you get for 30 USD from a garage sale. For snow we use any type of shorter and wider skis that ride the snow better. But the comfort of snowboard boots is also very attractive.
Top

Can you kite in the water, with a TT ; if , (yes) then i'd go
with a snowboard,instead of skies, but take a few days of lessons first.
Riding a TT and snowboardng while hooked up to a kite
are kinda, sorta , maybe , some-what similar.

I have essentially no concept for Feel , when on snow skies, snow board
or riding on water, with a TT or directional , with my two fake legs ; so
i'm telling ya out-right , (if i can do it -- Anybody can).
Go for it ; and have a Blast !!

I’d definitely agree that unless you’re already a good skier better to go from kitesurfing to using a snowboard, otherwise there are going to be some bad crashes when you realise you’ve no idea how to turn properly. Otherwise I don’t think the type of skis matters that much other than a decent edge and maybe fatter skis if in powder.
Top

Esp if your riding on frozen lakes and fields.

Sidewall construction will stand up way better than cap. Goes for skis or snowboards alike.
Top

On frozen lakes with no snow on them, I would recommend a pair of race skis. Old style downhill skis without any cutout, straight edges, work fine, but they are getting ever harder to find.

I have a pair of Volkl Race Cats that work great in most conditions. You can get a pretty good deal on race skis on E-Bay.

For actual racing, I get the longest race skis I can find. For just riding around, get something shorter.

Just make sure the edges are really sharp. The colder the conditions, the sharper they need to be.

On grassy fields with a thin layer of snow, any old pair of skis will do, something you don't mind scratching up. Otherwise, choose your skis according to the surface conditions. Powder skis, regular downhills skis, whatever works.

I ride in snow kite since 20years and I had so many different ski.
At the beginning I had freestyle ski. Really smooth, thin and really short.
After I had more common ski, parabolic and classic for all condition.
I had really big skiing really large. Perfect for powpow and speed, horrible for fresstyle and rotation.
Now I had a fat but a short fat. It seam to be good in powpow because of the large and acceptable for freestyle because it is a 175cm.
So you can take what you want. Fat for pow pow, thin for ice or hard snow. Longer for powpow and speed, shorter for freestyle and tricks. In my point of view, I prefer straight ski. I don't like parabolic.
So I found an old fat ski in the shorter size (stunt) I pay 130euro I think.
The other point is the fixation. I use only spheric from Salomon. Because it is the only fixation that can release the ski when ou catch the front of the ski and it is current after a kite loop or other bad reception.

Just my own personal opinion but you absolutely must get some 80's or 90's era skis. they should cost about $10 or so if you can find them before they get thrown out. The main reason is that modern skis have enormous ski cut and turn great, which is great for going downhill. Old skis have no sidecut and they pretty much go straight really good. Now the reason this is so good for snow kiting is that most of the time you are on edge, the kite is pulling you sideways and having that straight ski just makes everything so much easier. A modern ski always wants to pull you left or right and you are always fighting both it and the kite. This is for ordinary conditions where you have packed snow, crusty snow, light snow, any of the typical garbage snow conditions, those old straight skis are great.

But sometimes you have a big POW day. In this case, put away your old skis and bust out the snowboard, and carve to your heart's content. Anyone who skis can learn to snowboard it's not that hard especially on a kite. If you really don't want to use your snowboard on a powder day then yeah get a modern ski but no matter what never use your downhill skis while kiteboarding, as kiting puts too much abuse on your skis.

I have 2 sets of skis 2 snowboards 1 iceboard. 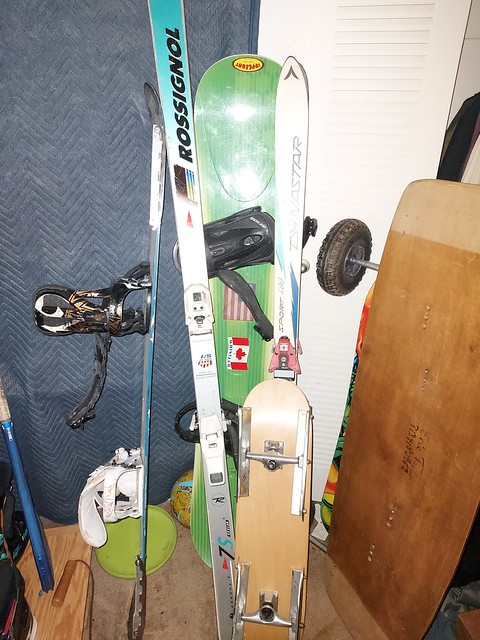 I used to have 2 iceboards but added some hockey blades to one of my snowboards and it is better than an iceboard to be honest, but you need 2 blades one near the toe one near the heel, 1 blade in the middle doesn't work right.

You never know what kind of winter you will have it's like a box of chocolates. I wouldn't bother buying anything until the season arrives some years you never get both snow and wind at the same time and it's a bust. Other years you ride every day.

Which by the way is why all those ski resorts force everyone to buy their lift tickets in advance. It's because if they don't charge you 300% more (and sometimes not even letting you in at all) for buying your ticket on the spot a lot of people would never go. Some years it's just a bust. it's so dependent on mother nature. They force you to buy months in advance before you know how the conditions will be in the mountains. Lift ticket prices get me so mad. I don't want to buy that stuff in advance! What if there's no snow? anyway, the good thing about snow kiting is you don't have to buy anything at all and just wait until there's a big dump, good wind go buy some gear and have some fun that's what I would do wait until the snow kiting season is actually here.

I think total cost of all the gear shown is about $200. $10 for the skis $30 for the snowboards, $100 for the skateboard, then about $50 in parts to fix everything up. I will drop a few hundreds on my boots though, you got to make sure you got a boot that fits right. You don't want no skanky used up old boot you want a modern decent boot.

Oh one last thing I pad it up helmet elbow knees hip sometimes wrist guards. Without pads that's no way you are going to boost as the crashes are so hard. One hard landing on your knees is season over without pads.
Top
Post Reply
17 posts