Conditions: Steady 7-10kts gusts to 12, lulls to 5 (estimations, not intentionally into BS but you know how hard these estimations are). Wind meter at the local wind surf club said 10kts average, 5m above sea level, at session start which means 1-2kts more at kite height!?

Disclaimer: No affiliation whatsoever, i pay for my gear. I will refer to the core xr2 19m as 'the core'

I stumbled on a post here some 4 months ago or so about 'the biggest tube kite on the market' and being keen on getting out on the water whenever possible i decided to go for this big bad boy.

The first thing you notice when unfolding the kite is the lack of dacron reinforcements on the wingtip canopy which the core(as every other kite i've had) has. Second is the absence of one-pump, which adds a few minutes of inflation time. There are small velcro pockets at the wingtips where you can put the bridle lines, or part of them, which facilitates rigging. The 10/10 for quality is because i feel the quality is Right for this kind of kite, it is about 1kg lighter than the core(did not weigh them myself, feels like it's right) and still feels solid.

The Ultimate Bar has a nice grip and is simple and uncluttered, the only thing to have in mind is that if your arms are of average or short length, place the depower/stopper about 1/3 towards the bar at rigging. I immediately set the lines up to 32m with the 'Rallonges' provided. The ERA line came with extension lines as well but it was as long as the other lines so i was not able to fit that. I am thinking of a solution with two lines, one on each side so I can choose which direction i want to launch in.

The kite launced beautifully. In the air the kite is VERY stable. In the same winds that made the core fall out of the sky eventually, i had no problems keeping this one in the air. The kite stalled a bit a few times, i just sheeted out and it came back nicely. The size suggests it is a slow turner and it is, it requires full input at its low end. I am convinced though, that with the shortest line length of 20m for higher winds(with gusts at 12kts I was fully sheeted out, no depower) this becomes a different story. It reacts a bit differently to input: it moves when input is applied and immediately stops when you hold the bar straight so it's like you can alter the kite's position in 'precision steps'. Very stable indeed

I started off on a surfboard with some 10kts wind with gusts to 12kts. Totally effortless, no sining needed, sheet and go, immediate upwind. The kite responds fine to input even if a bit slow, like the cab contra III 17m. Upwind ability felt about the same as for the core, not much worse nor better. Bar preassure was just fine, firm without being tiring. Oh, almost forgot: once i fell from the board in a gybe and to avoid a crash i had to downloop it. So Yes, it loops with enoug input provided, not bad for a 21m

also i did not test jumping. 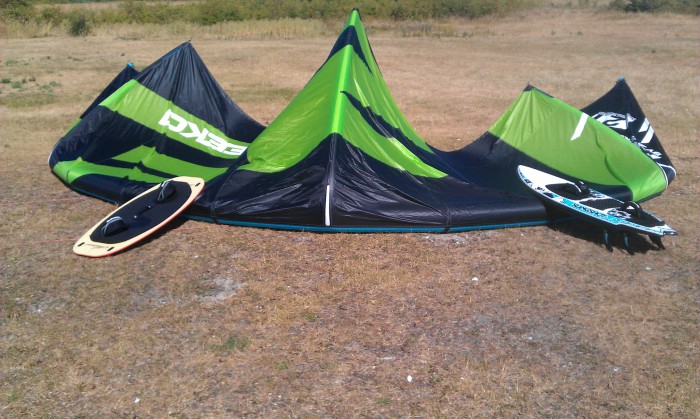 
The SS Arcane is not the ultimate LW machine but i don't have depht for race fins or hydrofoils where i ride most of the time.

The wind dropped to 6-8kts and i could just hold the line with the surfboard. I decided to try the skimboard. In the 8kts 'gusts' i was able to hold the line, planing, but in the lulls i sank through.

[ UPDATE: After three days with 0-5kts wind the wind finally returned today to a steady 12kts with gusts to 18kts according to meter at the local surf club. So i took my regular twin tip for a spin, a Spleene RIP HT 37(137x44) -09. I started off on 2/3 depower and standard line length(made the kite more responsive!) which i kept the whole session. I did short runs, like 200-300m, to test the jumping ability.

The key to jumping is timing and this is a very forgiving kite! the few times at the start when i completely mistimed and ended up with the kite far behind me, lines totally slack, it just drifted to stretch, i could give input and was going again. The core would at some of these occations have punished me with some hindenburging, rolling over and end of session.

for jumping! Probably did my highest jump ever today, but that was more luck, it will take some time getting the timing right. Upwind is easy though it requires heavy edging. ]

Summary: Don't be put off by the number on the kite, it is a nice kite! It gets me going 1+ knot earlier than the core with the surf board, it stays in the air like the Turbine and with better bottom end. For winds between 7 and 12kts this is a session saver for me. For winds between 11 and 16kts the core will still be my goto kite.

After the second session i realized that the standard line length improves the top end and responsiveness. Gusts at 18kts were manageable, i would say my limit is 20kts(survival).

Great review. Sounds like we've got a new light wind champion. It sounds like it will blow away all other serious light wind kites: Ozone Zephyr and Edge, Blade Fat Lady, North Dyno, Flysurfer 21m.
Top

Didn't know the edge came in a 21m size?

and yes agreed, thanks for the review.
Top

Nice review.
I would like to see the 2014 LW machines in a head to head battle.
Top

Yes, i bought this kite. To my knowledge this was the last one of the 2012/13 model, Nicolas told me the 2014/15 model will be released somewhere early -14. The current model has actually been around for over a year now so it is a bit funny that i am the first one to write a review.

If it blows all other light wind kites out of the sky? Well that depends. I didn't bring my regular TT on which i would have had the confidence to try some of the fun stuff when the wind was in the teens(for a very short period of time) because it wasn't supposed to be more than 6-8kts yesterday.

joe weiss wrote:Nice review.
I would like to see the 2014 LW machines in a head to head battle.

How long did it take you to pump that puppy up....?
Top

Time to get on the water is pretty much why I switch to foils on anything bigger than 12m.

Also, if you're going out on a 21m kite it is likely to be alone or with very few other kiters so the ability to self launch and land is really important.

So any comments / experiences on these points for the Zeeko would be useful.