FHL KITES – THE HARLEM 9M
FHL: Designed an sold by the owners of Kitesurfshop.nl from the town Haarlem, The Netherlands. This new kite brand is created and on the market since a couple of months. The Harlem is developed and designed from scratch and does have some similarities as some other major brands but has its own unique light feel. Adding one major difference, its price tag; the Harlem is about 20% cheaper than comparable kites. And there is more to come in the near future from FHL, more sizes but also an Harlem Pro which caught our attention even more than the normal Harlem…

Designed with the experiences from repairing a lot-and really a lot, by their own words 5000 kites – kites, Hans Lieben took the step into bringing his own kite brand to the market; FHL, short for his own name Fokko Hans Lieben.
Adding another kite brand to the 60+ already on the market, must take some guts to try that. What we know is for a fact -and which may even be more important than his experience gathered from repairing kites- that Hans has used (and is still using) a lot of different brands to see and feel what is out there. He is a good kiter, does most disciplines, like freeride, wave and foiling at a high level but isn’t too good to be too far away from what an average kiter needs. That way he know,s as we do, small differences in design can create huge differences in performance from a kite. Funny detail is that we have seen him with zippers and multiple bridle settings on his kite each week trying new settings and small tweaks to see what may be better. We also saw him work on his Harlem Pro model, and a sneak in session with one his prototypes made us very, very curious on this ridiculous reactive kite, which when it will be released (scheduled for February 2017) will get a whole lot of intermediate and advanced fans.

Just as the New York district the Harlem is named after the city Haarlem in The Netherlands. It is also the city where the kitesurfshop.nl is situated. The Harlem doesn’t come with its own bar, so it is free to use any bar you like. Remarkable detail is that the designers say the height of the split point (“V”) of the front lines doesn’t matter.
This made us decide to use the new North Click bar, which easily is transformed from a 6m high V to a low V. At the same time we could do a test on 24 and 22 meter lines, since the Click bar comes with 2m extensions. When ordering the FHL a Ozone Contact bar is offered (with 25m lines) but in theory any four line bar should work. Probably the best set up for a beginner is the low V 24m lines set up. When you advance the 22m version may suit you better, since it will be more reactive. The higher V (at 6m) was not a bad setup, but it wasn’t as good as with the low V. It felt a bit like the bridles where being pulled a bit to much inwards creating some strange feeling for the rider.
The Harlem has 3 struts, 2 battens, one pump, wide inflate and some funny inscriptions on the leading edge.

Further the website clearly indicates the Harlem as a beginner kite. something which other brands are less pronounced on (probably afraid to lose some potential intermediate buyers).

Although we see and feel a lot similarities with the North Evo, the Harlem and the Evo are not the same. Biggest difference is that the Evo comes with 5 struts and the Harlem with 3. Resulting for the Harlem in a more friendly and less rougher, lighter feel kite. For example the bar pressure is slightly lower and the effects of throwing around the Harlem is easier and with less heavy pull as compared to the Evo. Women seem to like the Harlem a lot, and not because of its colours (you can only get one) but because they are more in control. Understandable.

And still the Harlem will float nicely when jumping, but not as long as the Evo (which is a bit logical as this is one of the most pronounced aspects of the Evo).
You do need to have some sort of comfort to have a relative quick beginners kite, certainly if you compare it to some other beginners kites which sometimes are unbelievable heavy in the feel (bar pressure), but those kites are also much more at ease (for example the Gaastra Spark). Personality of the kiter that is looking for his, or her, first kite plays a factor choosing between those two totally different types of beginner kites. Where a confident person who doesn’t mind a quicker kite and less pronouncing where it is, will learn and grow much quicker with a kite like the Harlem. Some one who is relatively slow in learning and insecure will be less happy with it.bridle-connections

Another (smaller) difference between the Evo and the Harlem is that the Harlem has an option to reset the bridle connection on the leading edge to make set at a wave setting. The Evo just knows one setting for its bridles. It is probably something beginners won’t adjust, but an intermediate kiter (of foiler)

The Harlem goes upwind easily and the boost for a jump is very moderate, again something what a beginner would appreciate. The power stroke is a bit shorter than other beginner kites but still smooth and friendly. If you do start to throw the kite around, the canopy will be releasing its power gently and won’t punish you for your mistakes. 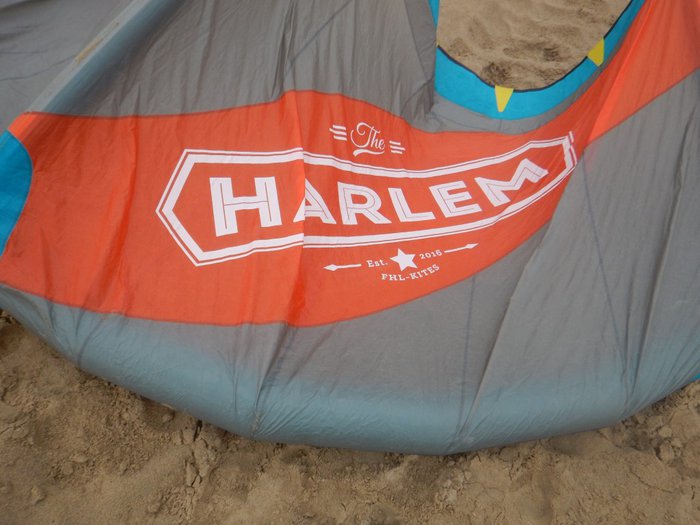