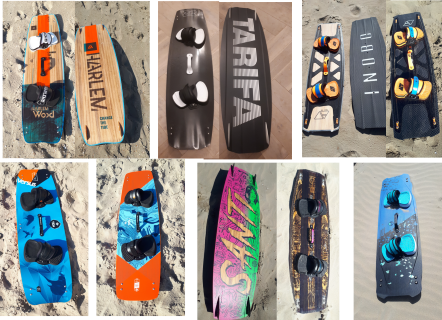 Review:
Nowadays 600 Euro’s is a bargain. Small brands beat bigger ones much more on twin tips than over kites. Put those two together and there is a good reason to be testing 7 (and a half) of them. Selected away from the main stream brands and to potentially saving you a couple of hundreds euros. On the look out for that affordable pearl which gives you the feeling you can fly to the moon.

The most interesting data is gathered above. Not mentioned is that some of the boards can be ridden by boots. The focus of the test was using tem with straps with a 80kg person in 25 knots wind on a open sea up to medium waves.

Winner
The board that everybody liked was the Dutch Ten The Mark. But with its 800 Euro price tag it also is cheating. Its price comes close to big brand prices like that from a F-one Trax or a Naish Monarch (both around 900 Euro’s). And be careful comparing prices. A lot of shops advertise prices of twin tips without straps. Some times -like Ten- even without fins. And a surprising amount of online shops even don’t mention that when ordering it!

The Mark isn’t a pretty board. In fact its fifth fin looks like a teeth has grown through a cheek. A very fat cheek because it has by far the thickest rail of the test. Surprisingly it is also the lightest board in this test. The test riders praised the huge amount of grip. Going steady like a train. Ten is promoting it as just going for the highest jump. And that is cutting The Mark short. It works for much more purposes.

Harlem Wood and Ten the Act
The Harlem Wood (‘handcrafted’ in the Netherlands) and Ten The Act both are serving similar riders; the ones that are in their early -or even first- kite years. The Harlem being the more comfortable. It is -and feels- lighter and the one to be going a bit more early.

Santiboards Donkey, Fluid Twoseven 2020 Black Series and Saul’s Tarifa Carbon
Now about the Donkey from Santiboards, The Fluid twoseven 2020 black series and the Saul Custom Tarifa Carbon. All three have their own story but they have one thing in common. Their price; all of them are below 600 euro’s for a complete board. But there the similarity stops.

Saul has it all worked out; no persons in between the testing and the shaping. Everything is done by himself. On top of that Saul moved to Tarifa a couple of years ago.
If Tarifa is the Mecca of kiting -which it is- than the Tarifa board is a saint one right away. We already tested other versions from Saul. The Pure was our favorite. The Tarifa Carbon is a relatively new board. It is -and feels- very light.

The edge is the thinnest in our test and it was the most lively one. Playful and very quick to respond on rider input. Others who likes board as the Duotone Select Textreme (which costs more than double) also liked the Tarifa Carbon. Quite a compliment but not all of us are into those kind of boards. Its comfortable, very flexible. But at more powerful sessions in heavy conditions (with waves) most of us prefer something being more on a steady track. With less wind, being underpowered on flat to choppy water, this board is much better.

The relative young Portugese brand Santiboards makes choosing easy; they only have one board in three sizes. Worth mentioning is that they are deliberately not using the bubbly plastic but use cardboard as protection in their packaging instead.

It is a nice mix of a board that is both pretty fast, medium grip and has a dito lively feeling. We tested the middle size 139*42,5cm. Which on paper seems like a big board but when using the Donkey it feels much smaller. In fact our biggest tester (95kg’s) didn’t like this medium Donkey because of the small size. The inserts are strong enough to hold boots. And that wasn’t a bad match at all.
The holes for the inserts are placed closer to the center compared to other boards. So the stance is less ‘duck’. Some testers slipped out of the straps quite quickly. It has probably to do with the straight stance.

Completely the opposite from Santiboards is the choices in twin tips at Fluid. The Twoseven 2020 Black series is adding another one. It has remarkable ‘coloured flakes’ and is ‘made from volcanic rock’. And there is tons more remarkable features like the spray reduction system, the weight reduction gap, the unicorn dust layer etc. It is very overwhelming. Not to mention the Fluid website states the 2020 one is a ‘super light’ kiteboard while it was the heaviest one in our test.

The 136 board felt a bit bigger than the number suggests. Probably due to the Twoseven tips which widens a bit at the end. The board is far less radical as we would have guessed upfront. Mister Fluid (Gilion) -the designer behind the board- is a known ‘booster’. The Twoseven 2020 was one of the most populair boards in our test for a wide variety of reasons. For example the amount of control combined with a comfortable ride. Remarkably everyone but the boosters loved the Fluid Twoseven 2020. Its lack of end speed was its most heard complaint. Sounds strange, but considering its (new) allround characteristics it is something that falls into place.

Inobo Woodio and Wavio
The French Inobo for sure wins in the innovative categorie. But it loses just looking at the costs. With 900 Euro’s for a wooden version and 50 more for the carbon version it shouldn’t even be in this test? Well if you consider it to be two different boards (which would be 1150 Euros) it is among the cheapest in the test per board.

The idea from Inobo is simple. Change your deck and get a different type of twin tip. There are three different materials for the decks. Polycarbonate, Wooden or a carbon version. The striking see-through polycarbonate has already been tested by us. This time we got the wooden and the carbon version. Changing a deck is an interesting crowd drawing event. Which means it takes a good 20 minutes (and a proper wash to get the sand out in between the decks and the carbon frame) to unscrew and redo all 14 screws again. On the water with the wooden version it doesn’t take even a minute to realize this version is a totally different ballgame over the polycabonate version. Much, much stiffer (the website states ’20 times’) creating a much more free- or even wakestyle board. Probably this one was the one who tends to be having the most extreme one in our test. To top it really of in that direction it would need smaller wakestyle fins and be ridden by boots. On the -really good- straps it is a board that would be loved by someone (younger) who loves to unhook and throw its board around and don’t care about the lost comfort by the stiffer construction.
The gap between the wooden and transparant deck seems to be filled by the carbon version.
Just holding the carbon deck feels like touching a part of a space ship. Very light and flexible as a piece of paper. Attached to the frame (which is also made from carbon, but feels totally different) we were a bit disappointed. The ‘Evio’ is missing grip and is far from agile. Speaking of a space ship there is some similarities between Inobo and Elon Musk’s project SpaceX. Although it seems both projects that are a bit far fetched and expensive, people admire it and are standing in line to take part. We would wait for a next carbon version to step on this interesting concept.

Reactions from manufacturers
Inobo:
About the set up system, if you want to add something about : we are developing a new system plug and play to change your deck – should be released in 2020… Antonin
Fluid:
Thanks for testing. To comment on the weight of the board, the Twoseven 2020 has its own weight and rail thickness per size. The 136 that was tested has a weight of 3KG without accessories (4mm rail which is now reduced on the 136 to 3.7mm reducing the weight to 2.8KG). Most of the weight comes from our thick pads and straps as they will increase the weight of the board but also riding comfort. If you are looking for a lightweight option within our range that would be the Lush which is made half carbon (out of the price range that the test was supposed to have) or any of the woodseries boards.As for the end speed we’ve reached a whopping 81KM/h top speed on it! Due to the shape and fins you’ll feel in control. Maybe test this part with GPS next time before making such a claim.However even with the very positive feedback I feel that the test results are incorrect. I was requested a board UNDER 600 euro complete as the Twoseven 2020 is below this price point we’ve send in this board (probably the most value for money board of any board in this price range). Now with the test completed the winner is a Highend board which is made with carbon. As you all know carbon is one of the most expensive materials manufacturers can use in their boards and that’s what you see in the price.
Comparing 1000 euro boards vs 500 euro boards is the same as comparing a Ferrari with a vw polo. Of course there is a difference in performance… if the difference is worth the price difference that’s a whole other test. As said before we are happy with the test results for the Twoseven 2020 as it does show we have built something very unique (and good). Gilion

Hi Dave, thanks for your job and for your reviews. Santiboards was born in Lisbon (Portugal) four years ago from a mix of Rider-Artist and shapers and they makes choosing very easy; they only have one board in three sizes with different colours, the design is done by Filippo Fiumani (link https://www.fiumani.it/). Also considering the added carbon that gives progressive flex for better freestyle moves. Enrico

Thank you for testing! Tarifa carbon board is dedicated for comfort riding, light and with much flex, the model created specially for freeride in choppy conditions. For more performance it can be made stiffer. For freestyle and big air we have other models in our lineup. Each of them can be customized according to the rider and his needs. Saul

A bit confusing is the fact Inobo and the Mark are in the test. They are a boards from a different level. About our twin tip Harlem Wood: We want to add that the orange striping and fins should be helping finding back the boards in the water more easy. Alex

The rail of the Act is thick but it has been cut slanted. The part that cuts through the water is only 4mm thick. Eddy
Top
Post Reply
1 post • Page 1 of 1