Anybody have any experience (during Amihan, i.e. the "on" season) with kiting the Northern and North Eastern sides of Luzon in the Philippines and able to give any advice/feedback from their experiences (launch sites, wind strength, consistency, general info etc.)? Tentatively looking into a bit of an exploration voyage next year.

This is the general area that I'm curious about: 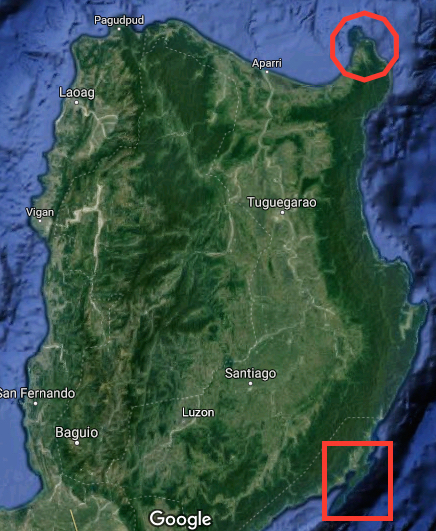 To summarise my impressions so far:

1) NW corner around Pagudpud. This is already a pretty established, though reasonably remote, kiting location and that there is already a fairly decent amount of information available and people to talk with about it (e.g. Kingfisher) - so, this is not really the area I'm seeking information about.

2) Central North (i.e. between Pagudpud and the NE peninsula). Splocs shows a few places here but historical data resolution is rather coarse (and records appear pretty incomplete) to get too much of an idea about how the local conditions would be along this coast, even though there seem to be a lot of places that look to be kiteable (river mouths, long beaches etc.)

3) The NE peninsula (i.e. around Santa Ana). This is the area that I have circled in red above. I have found where the PKA have held some competitions in Anguib before. It looks like a pretty cool place. Does anyone have any first hand experience of this general area and perhaps the other beaches/bays further around the Eastern side of this peninsula?

4) With respect to the North Eastern coast of Northern Luzon: there seems to be a bit of a black hole with respect to information about this area (even Google Maps does not indicate an awful lot in the way of roads or towns). I realise that a lot of this area would be very tricky to get to but, towards the Southern end of this area (this is the Northern end of Aurora province, i.e. approximately where I have made the red box), road access and infrastructure appears to be much better. Offshore wind data seems to be pretty good (although again coarse in resolution) and there seem to be some pretty promising NE and E facing bays/beaches (e.g. around Casapsapan Bay) which do not seem to be too badly shadowed. Anyone been in this neck of the woods that could comment on their impressions of it?