My experience kiting in Colombia for almost 3 months.

It’s the easterly trade wind that blows almost all year.
It follow the coast and becomes NE behind Cabo de la Vela.
Some periods with more, some with less strong wind.

I found the people ver y nice in Colombia too. And also very pretty women.

Cartagena is nicer than Fortaleza for sure. Beautiful colonial old town.

I spent January this year in Santa Veronica, Colombia (seems like a long time ago now

I stayed at Kite Eco House - more about that later. I arrived just as the January trades were kicking in. Average day was around 20 knots, using an 8m kite on my SB, people on TT's were mostly using 10m. Often the wind would pick up later in the afternoon & blow hardest up to & after sunset. It was windy pretty much all the time - felt really windy at night. I would say about 30-40% of the days the wind would blow in the mid 20's & higher. I had quite a few sessions powered up on my 7m or 6m & three on my 5m. Looking at the wind maps for the Caribbean, it was clear that this area (& the Venezuelan coast around Adicora) consistently gets the strongest wind in the Caribbean. Winds about 40 - 50 miles offshore were at 30 - 40 knots for days on end.

Santa Veronica is a dry, windswept spot (not very "tropical" at all) with a large shallow bay marked with a high rocky outcrop on the upwind end & a point on the downwind end. The shoreline is littered with logs that come from Magdalena river which is about 60 km up the coast. The beach in Santa Veronica itself is narrow, muddy & lined with run-down looking, deserted restaurants. The town itself is like something out of a spaghetti western - dirt, pot-holed streets with run-down houses. There are a few decent restaurants, one nice hotel, a couple of small stores, no bank or ATM. Getting cash (which you will need) requires a 25 minute tuk tuk ride to the town of Juan De Acosta. 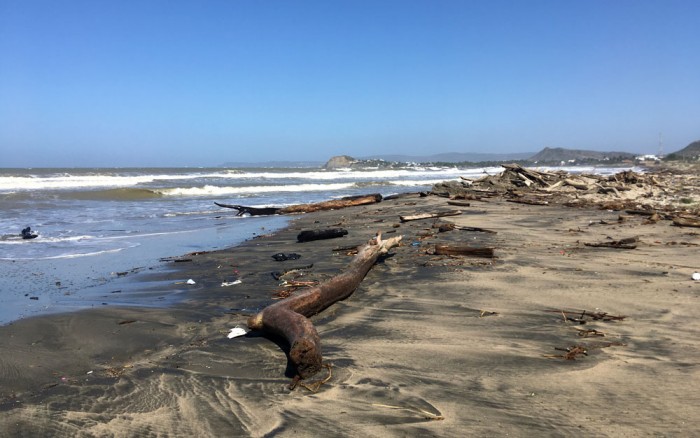 You can launch anywhere along the shoreline of the bay. The water is generally surprisingly choppy - not really like "open water" at all. Along the shoreline there is usually a modest shore break, allowing for some fun wave kiting but nothing really exceptional. The point - Salinas Del Rey - is where most people kite. Inside the point the water is protected & quite smooth, so TT kiters ride there. Peeling off the point is a nice wave. The wave varies from quite small to moderate (head high) making for decent wave riding most of the time. 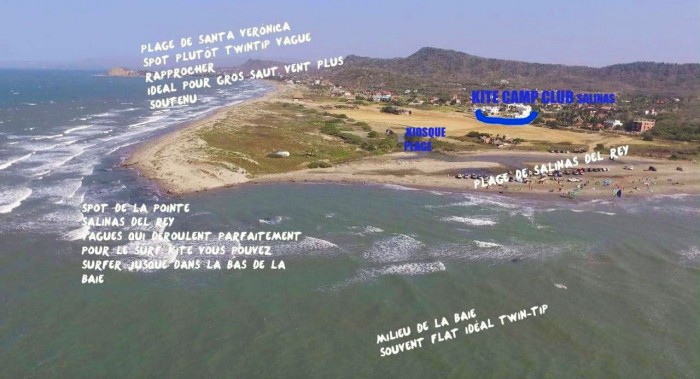 However ... at times the point "goes off" & the waves can jack up to double overhead. I can't explain "why" or "when" exactly this happens: it certainly happened when the wind picked up to over 25 knots, but according to the locals is also related to the arrival of the full moon. The character of the water changes dramatically: the choppy water offshore turns into big, widely spaced swells that generate a perfect break at the point. These bigger waves can peel off deep into the bay behind the point allowing for long rides on smooth wave faces. Not exactly down-the-line, as the wind is still side-on, but definitely one of the nicest waves I've had the opportunity to ride. 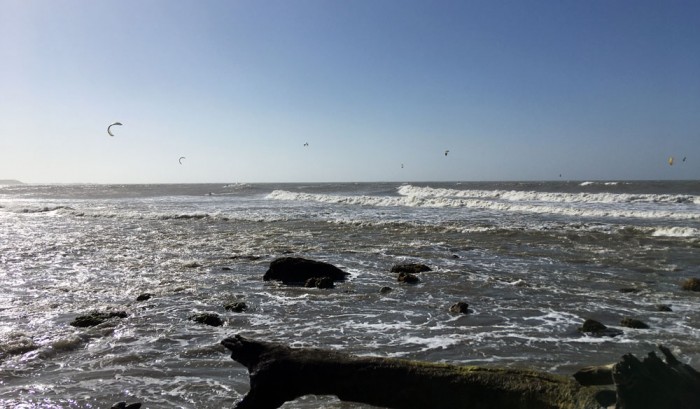 It should be mentioned that when the wind picks up (& also with a higher tide) there is a lot of wood floating in the water as the logs along miles of coastline are picked up & blown downwind. A bit hazardous - I never had a serious incident, but charging a wave face wondering if there might be a log about to crash down on top of you was a little nerve-wracking at times.

Behind the point at Salinas Del Rey is a muddy/sandy wide beach - often littered with logs - that people launch & land on. There is a shack there selling drinks & food - nice red snapper everyday for a very reasonable price. Local kiter JP runs one of the schools there & is recommended for teaching & local knowledge.

I stayed at Kite Eco House which is a new compound right on the beach just upwind of the Salinas Del Rey point. It's brand new, nicely designed & very charming in a basic, rustic way. Adriana, who owns & runs it is a Venezuelan who has been running kite tours to different parts of the Caribbean & South America for years. Adri & her husband appear to know very kiter in Colombia - a surprising number of whom are beautiful Colombian girls. The day after we arrived, there was downwinder organized from Baranquilla to Salinas Del Rey (about 55 kms) with visiting kiters from Bogota, Medellin & Cali. The beds are comfortable at Kite Eco House, a good breakfast is included, the option to eat lunch & dinner & the vibe is friendly, international & relaxed. The location is ideal, the only downside is it's often windy as hell through the night! 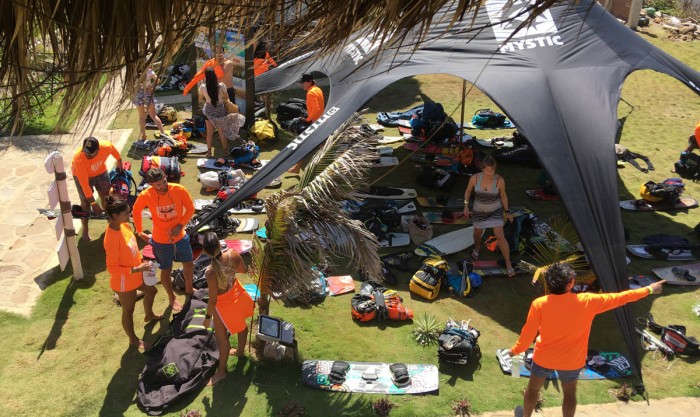 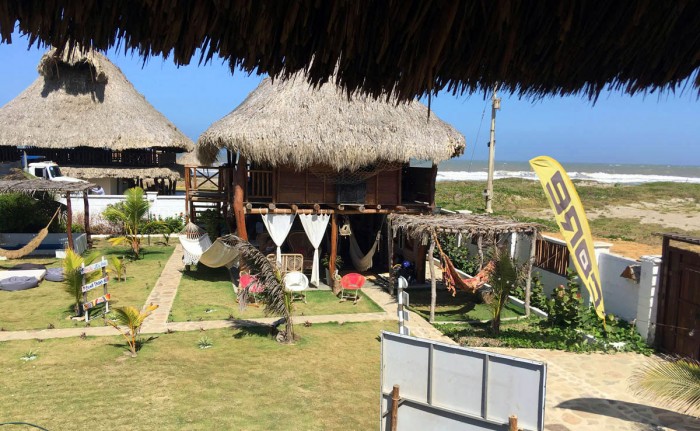 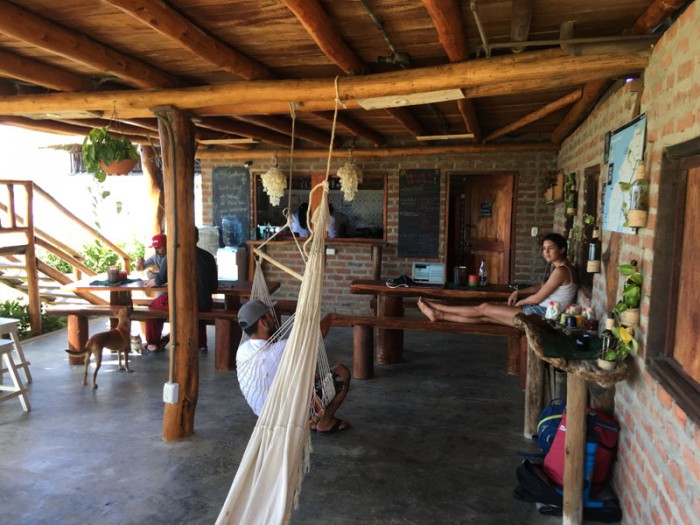 Side trips to Cartagena - about an hours drive away - an exceptionally beautiful old colonial (& modern) city, Minca in the mountains near Santa Marta (quite interesting) & Tayrona Park (pretty, but disappointingly overrun with visitors). Did not make the trip further north to Cabo De La Vela as it's a long trek & wasn't really interested in flat water. There are a lot of other places to visit, but all of them require a fairly major commitment of travel time.

La Boquilla in Cartagena did not really appeal me - less windy, no real waves, urban & a bit run-down feeling - but would suit someone learning, or someone wanting to be close to the night life & activities of a big city. Overall, I would recommend Santa Veronica to someone who's interested only in kiting & particularly wave kiting. It's no Cabarete, as there are few amenities & almost nothing to do after dark. The wind is very reliable - mostly in the 20 - 25 knot range & occasionally windier. There were about 5 days of lighter wind (the whole of the rest of the Caribbean was completely dead at that time) that was good for foiling, or kiting with a 12m. In general though, a 10m kite would be the biggest kite you would need with a TT with ab 8m for windier days & for a SB an 8m with a 6m for windier days (80 kg).