I have noticed that generation 1 racefoils eg Sword 1 had a few cm distance between the front wing and the fuselage, gen 2 eg. Sword 2 reduced this distance. I think this was done to reduce torsional effects of the front wing relative to the mast. The latest generation racefoils seem to have gone to a middle ground with a bit more distance between the front wing and mast again. I'm thinking this may improve pitch stability when pushed hard (not sure about this). Fues seem to have got little beefier also.
I have an older gen 2 carbon foil and as I like to tinker I was thinking of extending the front fuse a couple of cm to maybe increase the pitch stability. It would take a bit of beefing up of the fuse to reduce the torsion in the fuse. Has anyone tinkered with this in the past and has any comments on performance gains/losses? I would be keeping the AOA of the front wing the same as before.
cheers
Top

The smaller the gap the more the foil feels like it's on rails .... I haven't played with changing this distance yet , there are soo many parameters to change on a foil it's crazy.

But for pitch stability normally you would lengthen the distance to the tail stab. Or use a bigger stab.

There is a thread about a foil where the front wing sits dieectly below the mast ... Doesn't work too well apparently
Top

The general trend I've seen is decreasing fuselage length, increased stabilizer area, and struts mounted further back on the fuselage. This has created a generation of foils that are simultaneously faster and more maneuverable while also being more pitch stable.
Top

I made this fuse last year to investigate length and mast location. It was extremely revealing,. I still learned very little, the differences were surprisingly slight. Moving the mast rearward away from the,wing gave a looser feel with more yaw.for sure. 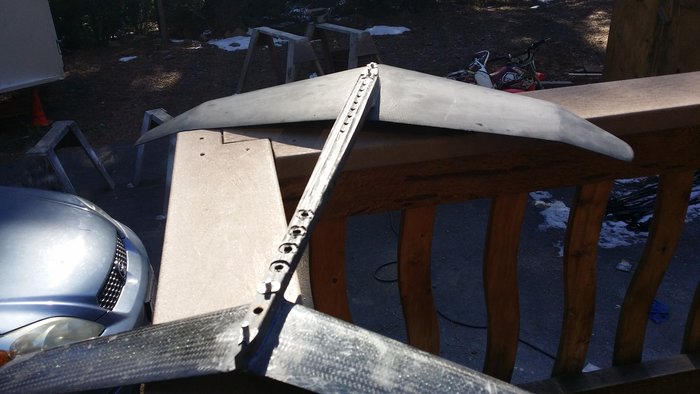 
It would take a very long time to try all permutations myself. I need a pack.of testers and a floating hangout dock for staging.
Top
Post Reply
4 posts • Page 1 of 1