Hi everyone,
My 2010 11m bandit3 tore open just behind a seam around the circumference of the center right strut stopping at the stitching either side. Been going strong 'til now, first major damage. Hasn't had 8 seasons use.

Kite's taken some slams in the past but none on the day the strut popped. Worth repairing or is this sort of tear an indication of age & it's likely another strut will go soon?

Forgot to take a photo before taping it up, the white rope shows where it tore on the next seam down. Still flies pretty well on 4 struts, this bad for the canopy?
Appreciate any advice, cheers. 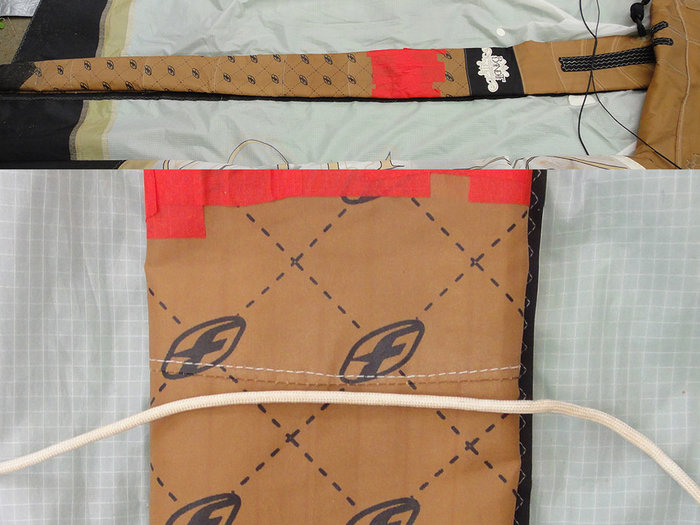 I know someone who rode a bandit without the centre strut for years.
Top

I would only tape it with the heavier tape version and not the spinnaker sail tape yours looks like. Fly it until this breaks and then cut the strut out and fly it that way. Dont invest in old kites as you will only regret it as newer used kites are just so cheap. Thats my lesson after 17 years of kiting. you will easliy spend $100 for the fix - see it as an investment in your next kite.

I had a torn strut at the joint and that did not last very long with tape. yours might be better right in the middle less of a stress point. G
Top

Definitely don't spend on it. Gluefix over fiber tape will last ages.
Top

As a sailmaker I would charge 30 euros for this repair. Have done many on old Bandits, it is likely to happen on other struts too... No big deal and the repair is invisible.
If you do not have access to a proper repair shop you can use adhesive Dacron tape or even duct tape. The advantage of these over " commercial repair kits" is they can eventually be removed down the line for a perfect repair if required.
Using glues and netting to repair a kite is more expensive as it will devalue or make a kite un-sellable and also makes a future "proper"repair more difficult and costly, sometimes impossible.
Top

I agree, gluefix repair will severely devalue the kite, but I also hope most people have the conscience not to sell a repaired 2010 kite. 30 euro is pretty good, but in context, that's 25% of the kites total value. So really, glue is not the worst idea in the world. Done right it's sea worthy, and that's pretty much all that should count in this case. Whatever route the OP chooses, I strongly suggest using the kite until it's done, strip it for parts, bin the rest and move on. Nothing wrong with preserving the appearance for your own sake, but trying to preserve value in older damaged kites for resale is bad karma.

That kite will fly just fine with the center strut deflated for 0.0 $
Top

LiquidXtasy
Frequent Poster
Posts: 299
Joined: Tue Jun 30, 2015 7:03 am
Local Beach: The beach that's closest to my house.
Favorite Beaches: The ones with sand and water.
Style: 2 Feet on the board, 2 hands on the bar
Gear: I'm not driving right now, but when I drive I always start out in 1st.
Brand Affiliation: Your mom
Location: Florida
Has thanked: 0
Been thanked: 0

I don't think this has been mentioned, but if you do sow the kite, then make sure the bladder is out. Don't try to sow it fully inflated or else you will have problems with the bladder.
Top

No intention of selling or entering it in a beauty pageant. Just want to get max use out of it. Bladder didn't burst surprisingly just bubbled out, didn't know what I was looking at for a split second.


jumptheshark wrote:rode a bandit without the centre strut for years.

Could this damage the canopy? Looks stretched a bit over the semi inflated strut when flying. It's actually the strut between the center & right, not sure of correct terminology I just call it "center right".

Spot on knyfe, that's what I was quoted $AUD. Included post though, seems alright. Makes more sense to put it towards a 2nd hand replacement but seems like a waste to give up on the bandit. Might keep flying it on four struts & see how the rest holds up before deciding on a pro repair.

Can get a little pressure in it before the tape starts coming off. I'll try some dacron tape. Any trick to applying it on the inside of the tear, bloody fiddly. Tried to use the tape's backing to stop the strut sticking to it.


LiquidXtasy wrote: Don't try to sow it fully inflated or else you will have problems with the bladder.

Some sage advice there, can't tell you the number of times I've ended up in emergency with multiple puncture wounds after I forgot to take my pants off before hemming them.

Are the fiber fix kits a nightmare to wrap around the strut. Don't know how I'd press it down flat, do one side at a time maybe?

I'm a dab hand with a sewing awl, did a minor LE repair that held at least. Probably dreaming but thinking of trying a stitched repair myself. Gunk all over the needle & thread from the adhesive backed dacron made it difficult. I imagine it'd just clog up the bobbin on a machine. Got a heap of questions about that but it's off topic.

Got the kite 2nd hand & replaced all valves, bladders were fine. I'd say it was in hibernation for a while. Was in strange condition, canopy was crispy but covered in patches. Like it was only used a couple dozen times but flagged into the brambles after each session. Maybe it's not strange & the previous owner just learnt on it, no idea.

Been flogging it for over a year with no problems 'til now, pretty stoked it's lasted this long actually. Thought I'd regret spending $200 plus on valves. Fingers crossed there's a bit more life left.

Appreciate all the replies & any further advice, cheers.
Top

I have a bandit Dos (2009) and all my struts have opened after a crash to release the big stretched bubble bladder, fortunately the blade stretched but didn’t pop !!

I just see the burst fabric first and then stitch a patch over the weak spot ! Happened on all my struts yet I still ride hard with this kite and jump big !

Don’t worry too much about the looks as long as it’s s solid . I’d definatley keep repairing and get more use out of it ! Love the old bandit !
Top
Post Reply
10 posts • Page 1 of 1