Has anyone ever made their own harness?

I'm thinking about using the waistband from my old MOLLE pack, and installing a metal buckle and hook. I have better than average metal working skills from my time as an ironworker, so I have confidence in being able to build or modify something with more than adequate strength.

I have carried over 120lbs. more than 15 miles on foot with this rucksack, so I know it's dependable and reasonably comfortable. I do see myself wearing a running or wet shirt with it though, as the material is a bit course for bare skin.

Just no, go buy one.

There are closeout harnesses on eBay all the time, and a good one will last you 5 years easily.
Top

I have carried over 120lbs. more than 15 miles on foot with this rucksack

but have you hung your weight from it all day, with occasional extra G loading from jumps and crashes? Sounds like apples and oranges to me.
The tricky part of harnesses is the design/fit and sewing details, the metal aspect is basic, 4-9mm wires and light tubes or bars.
Most designs do need good welds though!
I would say buy one, but worth trying it on first for sure.
Fit is everything (if it doesn't fall apart

I have - for the last 2 years I have been riding with a waist harness I made.

I started making mine when the Ride Engine custom fit harnesses came out. I knew I could do the carbon fibre work and learned from their process how they did the mould. I used 4 layers of Kevlar and 5 of carbon. It is stiffer than either the custom RE or the current production models. For a spreader, I use a Jay bar. It's attached to the shell with 2 inch (and very thick) webbing. For padding, I tacked on a single layer of 5mm neoprene. I was planning to try it once to see how much more padding I needed. It was fine, so I've never got around to making it look more finished. I always expected to make further revisions of it, but it has been so good that I haven't found the need. A hard shell is so much more comfortable than the more common flexible waist harnesses. With regards to comfort, I have no idea how mine compares to a production model Ride Engine or similar.

Hey, cleepa. That's very cool. If you have time, please post a picture.

That's actually very interesting. I was thinking that because of the width of the ruck waist strap, it would be a good starting point, but I see from your post how rigidity is desirable. It's looking like scouring eBay is a better bet than recycling my old TA-50, but I'll probably come up with some DIY ideas sooner or later.
Top

Not quite but I have an old Neil Pryde windsurfing waist harness that is now my favorite Kitesurfing seat harness.
I cut two shoulder straps off of an old kite bag for the around leg adjusters and sewed the padded strap end to the centre of the rear under harness and the other strap ends to the sides of the harness at the bottom.
Then I converted it to a slider harness by angle grinding off the hook, angle grinder sanding disk rubbing the stubs flat and then splicing dynema between the ends and through a low friction ring. I hook my shortened chicken loop through the inside of the ring and have fantastic twistability relative to the kite.

You might also invstigate "polymorphic plastic" which melts at around 90 deg celcius. Get enough of it and you could mould yourself a hardshell harness that is easy to adjust the shape of.
Or get a friend to plaster cast around your back then lift it off after it's set and apply release agent, mould your side inside the mould and then use your choice of composite fibres and resin to develop your own hard shell.
Investigate "Alginate" too, there are youtubes of using is as a one-time skin mould that you can then cast off with some mould release. Plan the whole process first though!

Pretty happy with my own budget kludge solution though!
Top

Go for it! If you are worried about failure, just remember that kite harnesses fail all the time. I've snapped many spreader hooks and have sometimes had the stitching fail on a kite harness. When that happens you just hit the QR and swim or worst case you have a full release and chase the kite.

Go for it, if it has problems, fix it make it better and try again. There's no way that a harness off the shelf can approach a harness that you have tailored exactly to your specifications. You can get it to fit you perfectly.
Top 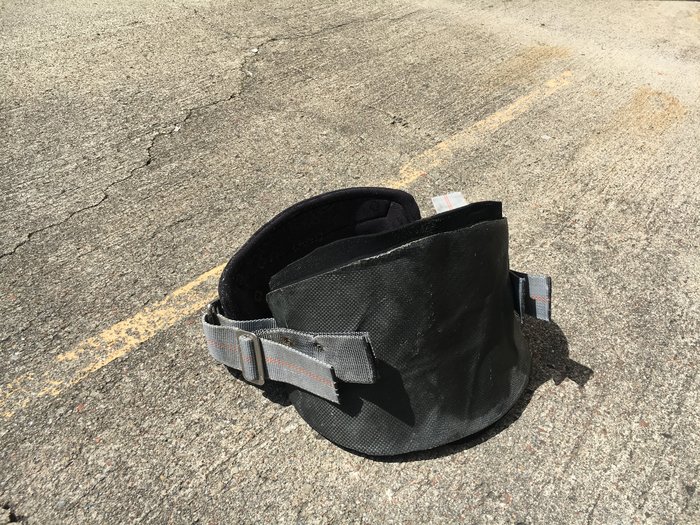 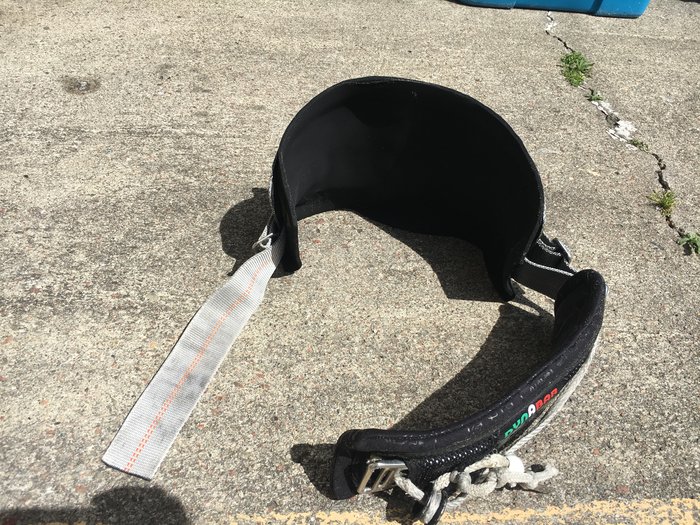 This was supposed to be just a prototype. It's so comfortable that I haven't changed anything. But there's a couple of things I'd like to do:
- bend the dynabar - I use the widest one and it doesn't curve in enough
- cover exposed metal with some padding to prevent board dings
Top
Post Reply
10 posts • Page 1 of 1