Back in 2007 kite hydrofoiling started as a set everyone could buy, and then go hydrofoiling.

A few did that, and it was amazing, but never really caught the masses...

Okay, now some years later the French had developed the kite hydrofoil to the ultimate sailing vehicle, stiffer faster better performing than ANY other craft on the water, even strapless.

It took sime time, but suddenly the racers got eye for this, and in less than a year the race hydrofoils made raceboards (Formula or Formula like) totally extinct, evaporated as dew in the morning sun !

At the same time the bigger market for freeride and freestyle started, some like Zeeko was frontrunners for getting it to the public as freeride, and also Horue got it to the next level in terms of freestyle - so more and more brands started delivering beginner hydrofoils and freestyle foils.
Beginner foils had some area, but not that big really, maybe around 750 cm2 for the "bigger" ones.
And freeride foils for those who liked to go fast, eventhough not racing, could be small, between 450 and 550 cm2 often, while medium sized 600 cm2 low AR wings could be used for waveriding.

Now racefoils, a league of their own, also started using bigger (but fast and high AR) wings for lighter winds and marginal winds.
And brands started pushing low cost foils with really big wings, 800-850 cm2 for those who wanted to learn.
Freestylers and waveriders also found that bigger wings had many advantages, they were just too slow (turning)

So wings started getting bigger in all three categories, and apart from race wings AR started to drop.


Nowadays we are back to the starting point for many freeriders and waveriders, as now the wings are back to the Carafino shape, same area and low AR - the circle is complete now 11 years later

In 2007 the Carafino foil were offered and everyone could start hydrofoiling - it looked like this: 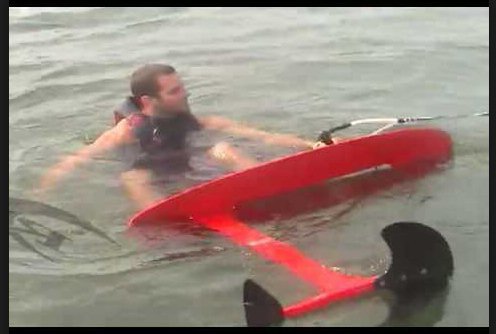 
More and more started riding this one, and it got developed a bit, still same wing 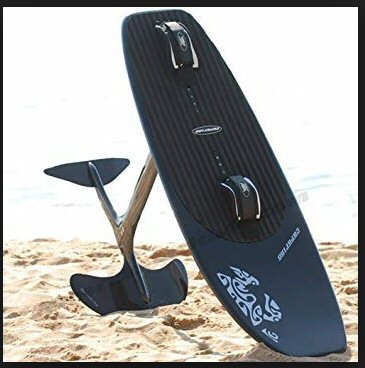 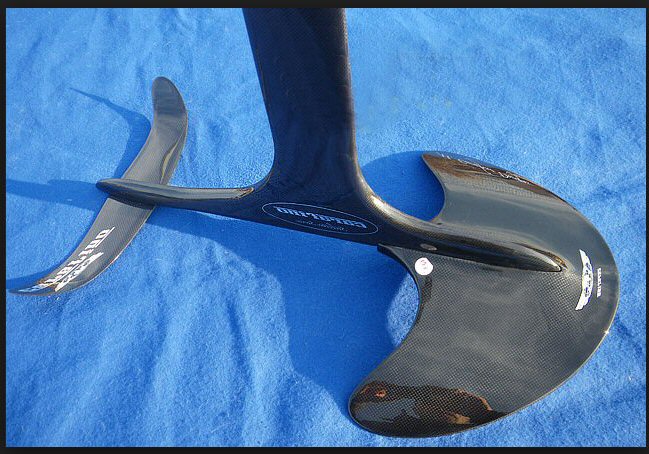 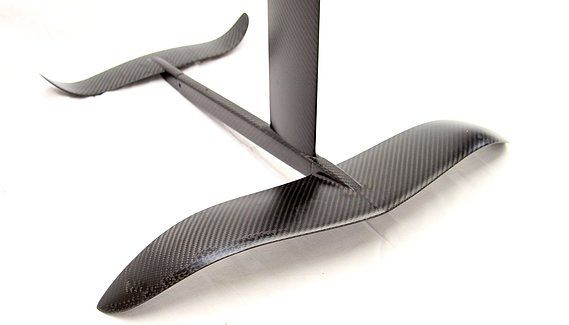 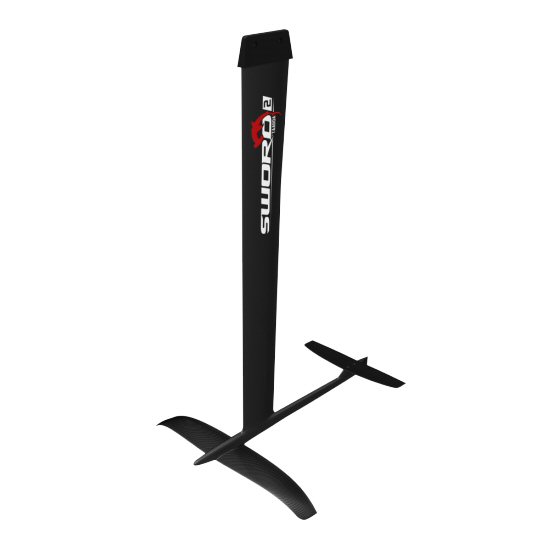 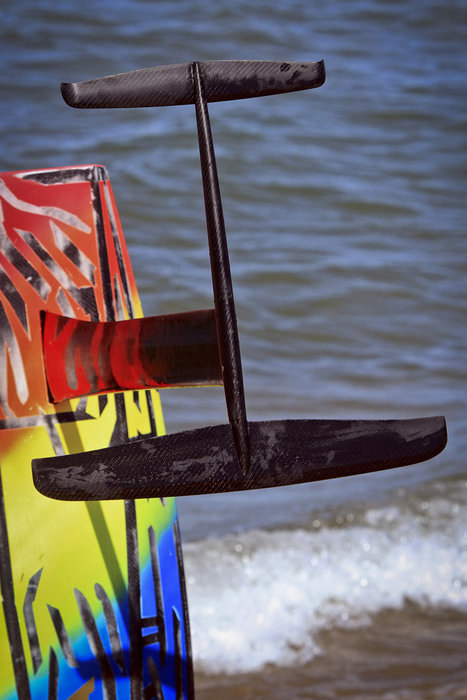 Slowly more and more freeride hydrofoils came along, and now they are selling a lot more than racefoils, and dominate in most areas - no pictures of these as pretty normal medium AR medium sized wings that worked quite okay for everybody both beginners and freeride/freestyle/wave.


Lately we have reached back to the starting point, huge low AR wings like the Moses Onda (1200 cm2) and Ketos 1200 cm2.
Take a look back at the first Carafinos and look at the resemblance 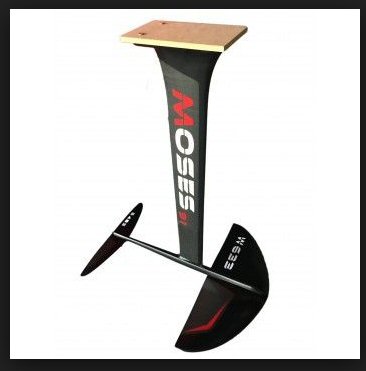 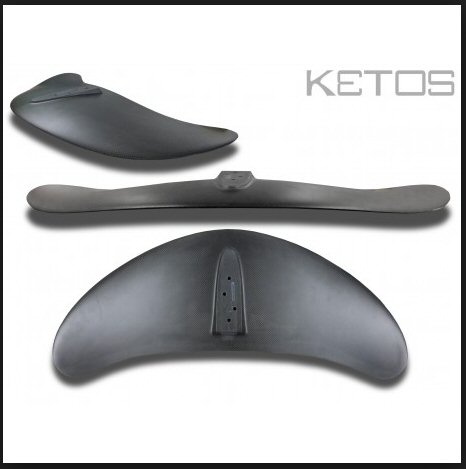 Maybe manufacturers have started exploring SUP and surf foiling market and that exactly brought back the 633 wing size/AR. The 633 was not even positioned as a kite-oriented foil but look at the overwhelmingly excited feedback it’s getting from kite riders.

Hydrofoiling is on a mission of killing the twintips en masse and we will see more variety, more features, more standards and proven solutions.

A flying-wing / “stabless” wing will eliminate stabilizer and fuselage getting wing mounted directly to the mast.

Pocket kites and pocket boards will bring the sport to new level of mobility.

What a time to be alive!
Top

grigorib wrote: ↑
Wed Jun 27, 2018 11:26 pm
Hydrofoiling is on a mission of killing the twintips en masse and we will see more variety, more features, more standards and proven solutions.

NOT EVEN, what a uniformed view. It will never "kill twintips en masse" based on SO SO SO many different reasons.
Top

There's way more variety now then there used to be and a lot better prices. For me I like the racing foils more, because I want speed.
Top

grigorib wrote: ↑
Wed Jun 27, 2018 11:26 pm
Hydrofoiling is on a mission of killing the twintips en masse and we will see more variety, more features, more standards and proven solutions.

NOT EVEN, what a uniformed view. It will never "kill twintips en masse" based on SO SO SO many different reasons.

That’s what guys with handles were saying of depower kites, and C-kite folks of SLE kites...
Twintips are nice for ramps, freestyle and shallow water.

Remember there used to be door boards as ultimate lightwind solution? Check out what happened to many of them....gone...done
Have you been to La Ventana on a marginal wind day? How many twintip riders would be there besides students taking lessons? A few...

I still think that people who just stick with the +1000cm2 wings are missing alot!
Top

Speed. Two weeks ago I couldn’t catch up on 633 with good windsurfers or with a guy on kitesurfboard and huge Flysurfer Speed2. But I was flying above water when they were arely dragging it in lighter wind and I was still on same 9m LEI
It’s a great idea to have a pair of wings for different conditions
Top

When your lake is 600m wide and two thirds of the way you end up in a wind shadow from trees on the other shore - the speed doesn’t feel that beneficial. Or when you outrun a wave, or when you fool around sandbars on a lightwind day, or practicing foot switching the fast wing is not as much fun.
But take it in a long stretch and 633 will be as boring as Segway on a straight line.

Also it’d be cool to have a line of wing sizes - riders weigh differently and there’s place for “smaller 637” for a 140 lbs rider and a “larger 637” for a 250 lbs guy. I know the 637 is the wingspan, I mean race wing design. Just like smaller airplane needs less wing area it would make good sense to have more size variety for the each wing design, be it race or wave/freestyle wings.
It’ll come, a year or two and things will become even more exciting
Top

Peter_Frank wrote: ↑
Wed Jun 27, 2018 10:43 pm
Nowadays we are back to the starting point for many freeriders and waveriders, as now the wings are back to the Carafino shape, same area and low AR - the circle is complete now 11 years later

The first Carafino had flat plates as "wings" with no airfoil profile and an oval shaped mast. A total lack of hydrodynamiscs, you needed the same power in the kite as a twintip to keep going so there was no real low-end advantage in this foil. That's a big part of why it didn't cought on back then.

I am already amazed by the low speeds the current race foils can go compared to some years ago, making them also amazing freeride foils if you want. Need to test those sup wings someday to experience that feeling!
Top
Post Reply
25 posts