foilholio wrote: ↑
Sat Jun 23, 2018 11:45 pm
If you shorten the profile adjusters on the bottom skin, it will increase camber and kite will overfly more. You would want to instead shorten the top skin to reduce overflying.

Positive camber creates torque that reduces AoA. This is why you get frontstalls. It also allows for more depower. Negative camber creates torque that increases AoA. This reduces depower but creates stability because the kite can balance excess force against the lines, any forces that would collapse the kite first must over come this force against the lines.

Both high camber and low camber can sit deep in the window. Lower camber is always more stable. What you observe with higher camber sitting deeper is the fact that the highest states of mixer pulled camber are at high AoA and as such sit deeper in the window. It's the AoA not the camber that does this. If you had high camber at lower AoA the kite would never sustain flight as it would only collapse.

The main advantage of higher camber is lift, this is simply described in the kiting world as grunt, pull, pop, low end, etc. The disadvantage is drag described as, bad float, hangtime, upwind, point,, and poor stability described as "what the f*** is wrong with this kite".

Higher camber can also be faster, lift equals speed. Though I have read the opposite can apply too.

Foil kites have the nifty feature that they can easily change camber with some AoA increase. This can be changed as a setting on the kite, as a function of the mixer ( non linear bridle attachment/ mixer ratios and things like WAC and Diablo lines), or with a trim on special bars. Camber increase can offer so much lift increase ( almost double) that water starting in light wind should nearly never be a problem, 3 knots is quite possible. As to controlling the kite or riding upwind that is another matter

I'm so happy with my Hyperlink 9m UL, it's my first foil kite. So much so that I don't want to go out on my lei kites anymore with my HF. This season I gave not done anything but HF.

In 17 knots it starts to get a bit much with the 9m, and I'm looking at getting the Hyperlink 7m and asking around for advice. What's your sweet spot range on the 7m Hyperlink? At what wind speed do you find the hyperlink 7m too much to handle?
Top

I'm so happy with my Hyperlink 9m UL, it's my first foil kite. So much so that I don't want to go out on my lei kites anymore with my HF. This season I gave not done anything but HF.

In 17 knots it starts to get a bit much with the 9m, and I'm looking at getting the Hyperlink 7m and asking around for advice. What's your sweet spot range on the 7m Hyperlink? At what wind speed do you find the hyperlink 7m too much to handle?

I've had just 3 sessions on HP7, so not competent to answer your question for sweet spot range.
First try to increase your 9m range by shortening the lines. Frank Rosin went to 7 m lines as best for him.

Foilholio, thak you for sharing your vast knowledge.

this way I can learn a bit more about kites in safe manner.

I tried 15m lines on the hyperlink 9m once and found it almost impossible. Thing was, I put the 25m lines on at that same session and it was still nearly impossible due to highly turbulent and en even wind. So don't really know.
Top

Interesting. I fly HL 12 on 15m lines and do not have major issues with it. Perhaps I have to pay a little bit more attention to downloop radius. I'm sure I've lost some of the power spike but water start does not define the lower limit for me. It is stalling in a lull while under way
Top

I was out today in 15-20 knots and a spot with a lot of wind waves on Hyperlink 9m. Moses 590 wing. 20m lines.
Wind was solid 16knots with sustained gusts to 20. ( according to measurement of wind sites.). a few km down the beach some were fully powered on 8m lei on surfboards.
It was too much kite. I could do it but I was having trouble and should have had my smaller 550 wing or that 7m Hyperlink. Or both.
I might of tried the 15m lines but couldn't be bothered to change them. Came in and had to release to the leash and it became a bit of a tangle.

I'm at the skill level where I can foil around in 1-2 m breaking windwaves, and wind is in the 20knot range then. but finding kite choice a problem. I think my 7m Mono would have been too much too! And my 5m Reo too small.
Top

jakemoore wrote: ↑
Sun Jun 24, 2018 4:52 am
Effect of the PMA is small and mostly changes the kite behavior when the lines are slack, e.g. the wingtips folding in when turning. Would consider adjusting the mixer before the PMA, e.g. shortening C by 1/2 cm.

2 days ago in gusty wind (15-25knots) I shortened all four upper PMA. Soul 6 was flying very fast through power zone with managable power.
Not any case of tip tucks. Kite felt a bit less powerfull.

Yesterday wind was even more gusty. I set all four upper PMA normal, and lower made one knot shorter - increasing camber. Checked the mixer and made ABCZ equal.
Kite become more powerfull, much more power throgh power zone. Very often both tip tucking (symmetrically - 0,5m each side) with lost of power as a result. Kite drifted a bit and regained power after a second or two.


foilholio wrote: Higher camber can also be faster, lift equals speed. Though I have read the opposite can apply too.

Your suggestion, foilholio, bring me to conclusion, that central part of the kite with increased camber overrided tips, exposing them to the wind from the top side.

Today I will set upper PMA on first knot. There are two PMAs on each side. On 3rd and 7th rib.
It will flatten a bit central part of the kite.
Additionally, at the mixer I will make C 15mm longer.
Wonder, if it will fly better through power zone without tip tucking.

Personally I think you will be better setting the PMAs short on top so it is stable depowered, like you did originally. Then you can play with the mixer to set more camber, as in you suggested lengthening C. Kite will be more stable depowered and then more powered when sheeted.

If I look back at your original problem it's that the kite is overflying on you? What you need to solve this is better bar setup and control. You need backstall on the bar, I use about 3 to 6 inches. Kite has a lot of trouble overflying being oversheeted that much. If flysurfer recommends flagging a collapse kite that is just silly. Kites collapse on me all the time. I often oversheet them so they don't do any funny stuff when they open again. If you want the kite to be quicker just use shorter lines, as low as 12m works with most 6m foils. You can get some issues drifting with shorter lines though. Depends on the wave size as well. Big waves and shortlines start to put the kite in stagnant air from waves. Kites drift always better on longer lines, more drag, more height to fall out of the air.

Another thing you should look at is using a mod to easily vary the length of Z for different conditions. Flysurfer mixer adjustments are great to get settings just right, but everything else is much better switching Z with a larkshead and knots.
Top 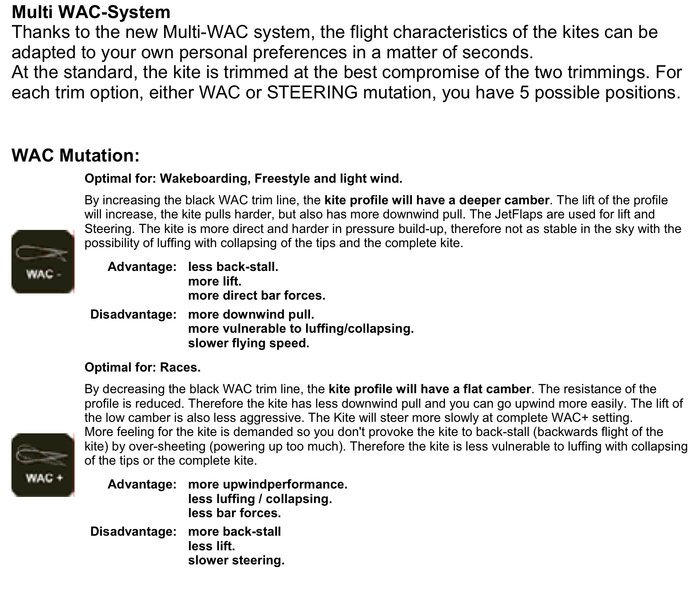 This is from the Psycho2/Voodoo manual, FS 1st kites with adjustable mixers.

Since then we have Learned:

These are old kite problems.

Somewhere between Speed 3 and 4 FS dealers started talking about letting the kite bed-in before changing much. Possibly FS design for some planned line shrink? Common complaints are instability when new (C too long, too much camber) and poor steering and power (back lines too long). The standard advise is to shorten C a little and fly it 10-20 hours.