The howling winds were already in by mid morning and signified a pumping Saturday afternoon of action.

At 12 noon, the first riders were sending it on 7s.

When it's gnarly like today, Sotavento is undoubtedly a technical place to land all your tricks perfectly in competition, but the Kite-Surf World Tour format rewards all aspects of manoeuvres and heat management. Can you go high? Yes! Is it still possible to do a variety of moves? Yes. And because it’s technical, Airton Cozzolino managed to nail almost a perfect ten from all five judges for technical difficulty in the last heat of round one on Saturday. 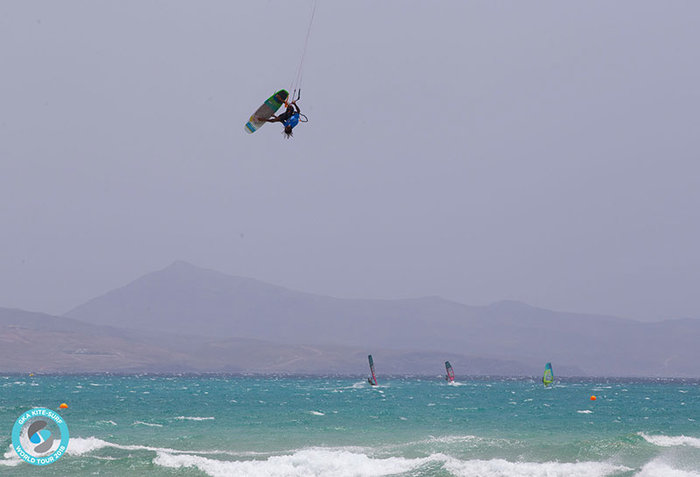 
The essence of kitesurfing makes sense when you see good riders going big with control. Airton demonstrated once again that his ability to progress quickly is still at an unbelievable level. Remember when Aaron Hadlow was innovating almost by the event in freestyle? Well, Airton’s pretty much doing the same thing in strapless freestyle. But he manages to do it by going huge! When walking past the judges tower, they could be heard exclaiming that he should be in the Air Games!

Other highlights of the first session today came from Matchu Lopes who had one of the most consistent heats against Laurens Karls-Kittel and Jorge Suarez. Where Airton explodes, Matchu measures majestically. Double front, followed by a double back roll as well as a back roll kite loop all added to a good score for variety.

However, if it’s variety that you’re looking for, check out Airton’s trick list from this first heat:

Sadly for Justyna Sierpinska, one of two women in this contest, he blasted them out against her!

Here’s how round one finished and rounds two and three started to line up: 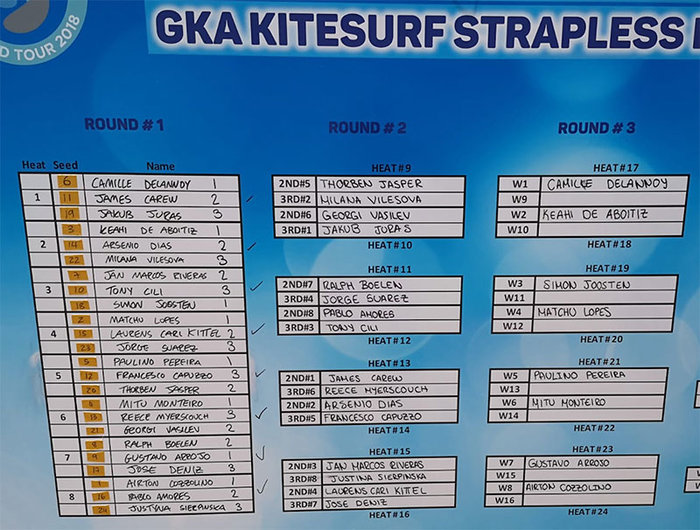 There was a buzz on the beach today because, not only were the riders competing against each other, they were on a journey together with the undulating strong wind conditions.

When asked at the end of the day, Matchu Lopes said, “Oh man, you have to concentrate so much through your tricks. You can send a loop and have three different stages of kite control throughout the trick. The wind is strong so you go high, but then if you catch a gust, or even two while you’re up there, you can go even higher and it was fun to watch all the other riders going up and down!” 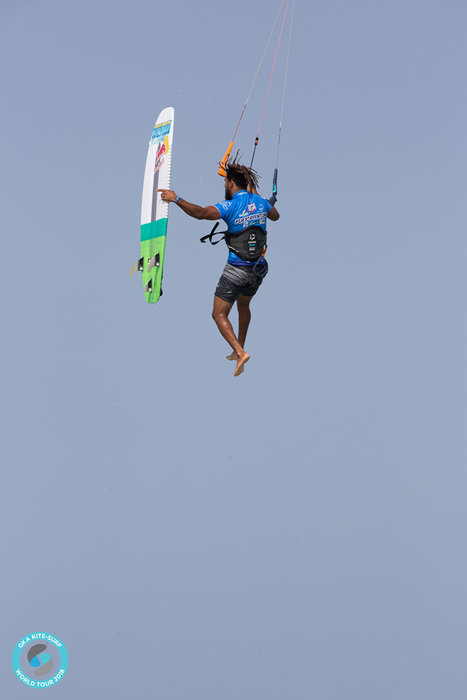 Balance, vision, bravado and juggling skills… Airton’s got it all / Photo: Jim Gaunt


The technical mastery on show today was great to watch. One of the newest moves is a back roll kite loop tick tack (a tick-tack being a board spin in your hand). So what’s involved? Firstly, controlling the board on take-off, showing the base of the board to the wind as you go into a back roll. Take the board into your hand as you send the kite into a kite loop and as the kite comes up through the loop spin the board 360 with one hand and catch it again as you traverse the sky line. Manage all that then maintain forward flight by keeping power in your kite without it stalling overhead as you drop down. Inevitably you’ll have to throw a rescue heli loop but with just one hand on the bar you’ll be coming at speed and judging the final gamble of whether you can get board securely underfoot without twisting your ankle when you land. Airton nailed several variations of similar manoeuvres as well as almost landing a big boogie loop rodeo (a move we saw him attempting to land in the tricky lighter Tarifa winds at the last round a few weeks ago).

Paulino Pereira would however go on to land the first ever full strapless boogie loop rodeo in competition in round three against James Carew. He needed to pull out all the stops against the Australian in the best heat of the day. James had had to come through the losers round two and was relishing the conditions, as well as the heckles from all the riders on the beach that became standard in each heat: ‘Kite looooop!’

Send it he did, time and time again. James also landed the first toe-side frontside 3 with a shuvit 3 in that heat too, but it was Paulino’s boogie loop rodeo (a big kite loop sending the kite back through the window as his body does a front roll with the board locked between his legs, before being pulled out neatly for landing).

Airton’s never one to be outdone, though. The quarter finals are coming up tomorrow when this big wind Sotavento turbulent rollercoaster will continue to enthral!

Simon Joosten from Barbados is continuing his impressive improvement, having knocked Keahi de Aboitiz out in round three in Tarifa, and will face the very smooth looking Matchu Lopes. Keahi de Aboitiz’ ability to adapt impressed today as he steadily cycled his way through bigger and bigger tricks. He’ll face the young French powerhouse Camille Delannoy who remains an unpredictable opponent. If he nails everything in his powers, he’s a capable winner and rode with huge power, propelling himself far across the contest zone today! Regular top five finisher Gustavo Arrojo from Spain faces Airton who has his sights set on a hat trick of wins here in Sotavento, while Paulino Perreira and Mitu Monteiro are two riders who have attended every wave and strapless freestyle event since the GKA launched this tour, and have a super close record against each other.
Top

So Simon Joosten is Rolf Joosten's son? Back in the day I used to know Rolf Joosten and his wife pretty well - small world!
Top