one picture worth 1000 words, thank you.

Your understanding is correct overall ; however backlines will only change the angle of attack , similarly as the trim on your bar ; on 3 or 4 will give more power than 1 or 2 ;

C and A act on the shape of the kite itself ; from your drawing which is the perfect start, you only need to change C : C2 is for the highest wind ; C5 is for light wind (generally but you need to find your preference)
Top

Back 1 or 2 or 3 will only change the angle of attack like would the bar trim do. It just relocated your bar mean position for comfort or compensate for a too short trim system . For example 4 will give you more power like fully trimed-out. 1 will do as if you take some trim from the bar. Preference can be different for a foiler or surfer and will depend amomg others on your arm length and bar even lines or not exactly even .


Now A and C : these settings will change canopy curve (cambre). To simplify the understanding and decision "on the beach", you can let A fixed in 2 (or even better 1 if possible) and only play with C :
- 1 or 2 for extreme light wind and/or need to improve the reactivity in turns
- 3 for light wind
- 4 for medium wind
- 5 for high winds.

Part of this setting range may not be useful , you'll have to adapt to your preference once you know your kite.
Top

Regis-de-giens wrote: Now A and C : these settings will change canopy curve (cambre)

Canopy curve is a term for how much C-shape kite has. I'm sure Regis meant curvature of airfoil (camber) like he also wrote.

By adjusting the mixer it is possible to alter airfoil shape to lower or higher camber. This can be done also in the bridle itself, but at the mixer bridle is collected together and universal adjustment is easily possible. However it sometimes may be better to adjust just certain parts of the wing.

Normal neutral "factory" setting is, or at least should be, the best setting in general. For example if all Pulsion users found out kite is better when tuned to higher camber it would mean kite has been designed with too low camber airfoil.

Mixer tweaking is always fine tuning, it is a false thought to think it is possible to change kite behavior grossly. You can't take a BladeIII kite, install a mixer in it and adjust it to a depowerable kite. It is not possible because airfoil shape is too far what it should be in depowerable kite. And as less you can take an Access and tweak it to high camber power kite. In both cases not only airfoil but every part of the kite is wrong shaped for new intended use.

Mixer itself pulls kite as it is designed, nowadays usually B is pulled 1:4 and C is pulled 1:2 of the bar movement. What then happens in a kite depends line row locations and setting itself/bar sheeting position.

Neutral setting is the only one with no distortion (or less possible). The bigger mixer tweak is the less smooth kite will be.
Top

Overall I do not agree but would not pollute this topic dedicated to pulsion with such general arguments. And would like to keep it as simple as possible.

I think my post was clear , i was mentionning camber into brackets, canopy beeing a general term in my mind to mention foil shape overall.

Yes camber allows to extend kite applications even if not magical obviously.
Top

Canopy means the wing itself. Parachutes, paragliders and foil kites all have a canopy which is made of fabric cells and vertical ribs (which have the shape of airfoil).

General understanding of bridle, mixer and sheetable bar and their functions is the basis of being able to tune foil kites and fix possible problems successfully. If you just know some mechanical mixer values (which are tied to some kite model and size) you are less prepared and may not be able to do it or mess it. There has been some weird (even false) explanations and advice in this forum also.

You Regis obviously do know how it works, many don't.
Top

A question from a non expert. I have found a nice animation of the hp from lecca-lecca kites. The show, as I would understand, that a kite with more curved shape (or less flat) is more powerfull, so I would think more suitable for light wind. I will try to add the foto. Also Merl, who put the nice drawing of the pulsion system, writes, that for extreme light wind C has to be attached to C4 o C5.
On the explanations here, if I move C to C1 or C2 I will get a flatter shape of the kite and by Regis more suitable for light wind, so the complete opposite what I understand from the hp from Lecca Lecca.

Can you bring some light in (my) the darkness?? 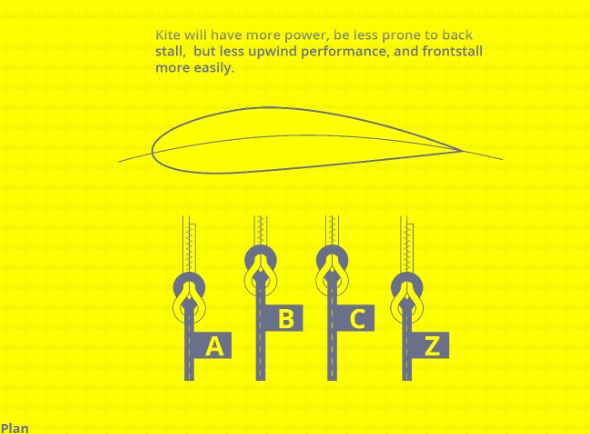 Updated version. Since knot 1 is not useable (it is only for connecting the front line) I modified Regis's latest instructions a little. The point of this is just to make a rough guide as a starting point for simple adjustments.

On the explanations here, if I move C to C1 or C2 I will get a flatter shape of the kite and by Regis more suitable for light wind, so the complete opposite what I understand from the hp from Lecca Lecca.

Can you bring some light in (my) the darkness??
Carsten

Carsten And all ...
I beg your pardon, and by repeating things different ways, i finally made a typo in the last message and inverted numbers... shit. Too much work at office , but not an excuse ... In my message just above this mistake , i mention that C5 is more powerful for light wind . This is the good statment contrary to my last idiot typo. This should be now in line with Lecca I suppose.

So I will correct my above mistake, thank you for your notice carsten, and Merl you should correct your good drawing as follows :
Fix A on 2
Change C according to conditions :
- C2 for highest wind or very turbulent
- C3 for medium winds or allround setting
- C4 or C5 for lighest winds if not turbulent (or need of agility in surf)


Once you are comfortable with foilkites (and understand that it should rarely been sheet-in like a LEI), then if you feel kite has a lack of power when sheet-in , then change Backlines to 3 or even 4 (my preference is when kite can backstall a little bit when fully sheet-in with trim at full power)
Top

Fixed and added to the first post (so it is easy to find for others searching for tips).

What will be the typical adjustment once the bridal gets old and B and C pulley lines shrink?
Top

Best is to get back to original adjustments. 1m pulley line can shrink 10% and this alone will ruin kite performance because it will pull too much B-C (to lowered camber).

Also the bridle itself will shrink, and this does not happen evenly because line lengths and loadings are different.

Much can be done by adjusting at the mixer, but not all. If pulley line has shrunk a lot it may be a good idea to replace it. How kite flies and if there is some issues it will tell what is wrong and what should be done. If there is problems it is always good to measure some lines in different parts of the bridle and compare them to original values.

Shrunk bridle lines can be stretched back to original.
Top
Post Reply
22 posts