I think red bull dropped the ball with social media no notifications of the event being streamed or happening for me in the us. didn't know they ran it at all. congrats to kevin. yay.
Top

Not sure what you mean?

Not sure what you mean?

I think he means that some people would like to watch the replay to see who wins rather than seeing the results in the thread topic.

Well it was a lot of fun on the beach, great crowd, good vibe, lots of enthusiasm, two streaking kiters came by between the semifinals and final heat, and I think Kevin deserved the win. My only quibble was with the fact that they announced he won before everyone was ready for the prize giving. They should have waited and done it then. And once again I stand in awe of riders who are on 9m kites, because I then rode my 7m from 18:00 to 19:30 when the wind had backed off quite a bit, see chart, and was fully powered up. No way I could have ridden 7m at the peak wind period they competed in. 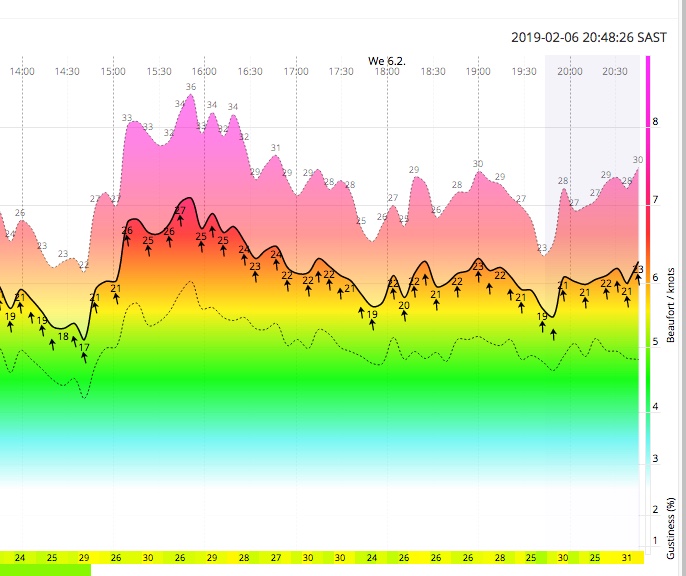 @Hugh2
I think it was Nick Jacobsen who switched kites in his heat. Do you know what he changed to and what he was on before? It seems like you have been there and might have noticed.
Top

Yes, it was Nick.

It was close no doubt. Liams kungfoo pass with a late pass squeezed the win and his mlbr was pretty big. Jessee and Kevin I scored v close, but gave it to Jessee for technicality. Kevin's one foot and roll board off loops were late on the dangle so i couldnt score them as super technical, his kite had way more paragliding going on, on way down, way less risk and technical, using a handle too. Variation at a high level - Jessee won.

Judges need to separate late tricks from during the loop and late. And as for "double half cab"... no such thing, as soon as it got named by accident - it was was taken back as a trick name as it was incorrectly named.

But you know what... with the 70% height - kevin won - because with that completely dumb ratio you may as well ride boring low risk (relatively) with a handle on things. He wasnt that much higher than Jessee by 70/30 . -why bother being technical... Also there is no way the judges have time to calculate the 70/30 on the fly, but i guess they have done the sums to see how dumb it is.

I hope MJ or Liam got best trick, they were at another level, and for liam to get into final in boots as a goofy footer (?)- pretty amazing, even though i think it is a bad idea to wear boots doing megaloops.

Some good improvements all around this year. Jetski rescue (trained i hope, and WSL style scoring works well for this).

kevins kite looked less wobbly in the gusts - pretty solid.. i reckon it was pumped up sooooooooo hard... how many psi can u put in those things?!

Change the scoring - Limit equipment (No Board handles)
Top

Well my opinion is that the right guy won. Kevin boosted big, did gracefull smooth powerful moves and landed them buttery smooth with style. The other 2 by comparison went for lower height more urgent spider monkey twisty twisty stuff which and smashed hard ungracefull landings to their technically demanding tricks. It looks forced, less composed and less stylish.


I recon the comp has the score style bang on. Its mainly about height then style. No need to change to suit the wake stylers. There's a whole tour dedicated to that stuff. I say bring on more height, more airtime and and more style. Also if the others lost based on kite choice and lack of height the responsibility for loosing is on them for choosing the wrong kite for the comp and conditions. The comp should not be changed to accommodate lower boosting less floaty kites.

Users browsing this forum: Google [Bot], or6 and 18 guests