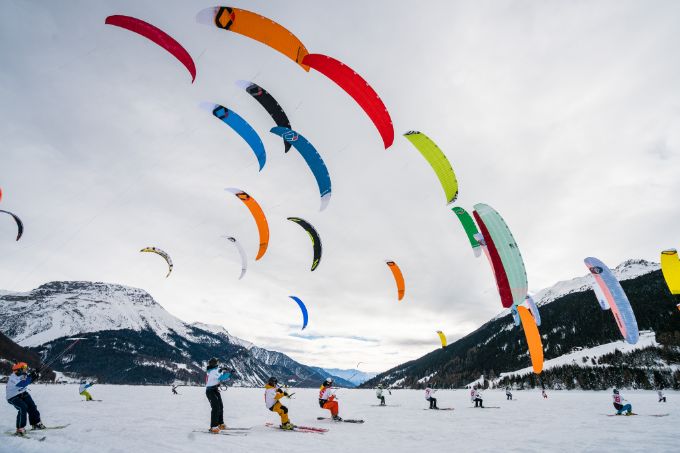 
From 15th to 17th March 2019, the Snowkite elite will meet for the Grand Finale of the "IKA Snowkite World Cup", and for the last event of the season: the "Swiss Snowkite Tour" in beautiful Switzerland - more precisely in Silvaplana.

After a successful winter season, both series of competitions will enter the decisive final weekend. In the past few weeks, the World Cup has stopped in Italy (Roccaraso), South Tyrol (Reschensee), Russia (Tolyatti) and Turkey (Erciyes) and in the incoming week, numerous snow kiters and avid fans will be expected in Switzerland in anticipation for the Grand Finale.

The "Swiss Snowkite Tour" has been an established and popular event series amongst athletes for many years. With great love and dedication, the team has managed to grow the tour, and in 2019 they welcome the IKA Snowkite World Cup for the very first time.

At the moment, Florian Gruber from Garmisch-Partenkirchen (Multiple German Champion, European Champion and World Champion in Racing in snowkiting and water Kiteboarding) is leading the category for skiing. Felix Kersten (GER) is hot on his heels, and could easily also continue his top performance on top of the podium.

In third place is currently Ilya Gibadullin from Russia, while in the womens fleet the Italian Cristina Corsi is holding onto top spot, followed by Mariya Bukreeva and Sofiya Nikogosova from Russia.

In the snowboarding category, Artem Renev from Russia leads in front of his fellow compatriot Igor Zakhartsev, and the Austrian Reinhold Gehrer, whom in recent years has achieved great results both on snow and on the water. Dutch rider Chanti van Boxtel takes the lead in ladies' snowboarding ahead of Latvia's Aija Ambrasa and Russian Valeria Garashenko.

The Long Distance Race will take place on Friday, March 15, 2019. In this discipline the participants have to complete an extensive race (depending on wind and weather conditions over 40 km) within a maximum of 2 hours.

On Saturday and Sunday, the competition zone on Lake Silvaplana becomes a racing hotspot. Exhilarating competitive races are to be expected, because this is the last chance to gain the highest ranking points to score the coveted World Cup Title.

Spectators can look forward to another spectacular event on Saturday and Sunday - Freestyle! In the Freestyle, the young athletes are expected to show spectacular jumps and challenging tricks with rotations. In addition to their acrobatic masterpieces, they use obstacles such as the so-called "rails" and snow-built ramps to earn further points in front of the competition jury.

In addition to the sporting highlights, there is also an attractive supporting program: on Friday evening there will be a "Kite Party" at 21:00 o'clock in the Bernina Ospizio. More great program points can be found on the website www.swiss-snowkiteworldcup.com.

At 6:00 pm on Sunday evening, the new champions of the "IKA Snowkite World Cup", the "SKA Swiss Champions" and the winners of the "Swiss Tour" will be crowned.
Top
Post Reply
1 post • Page 1 of 1