I went out today on a 4m Neo and hydrofoil in these conditions: 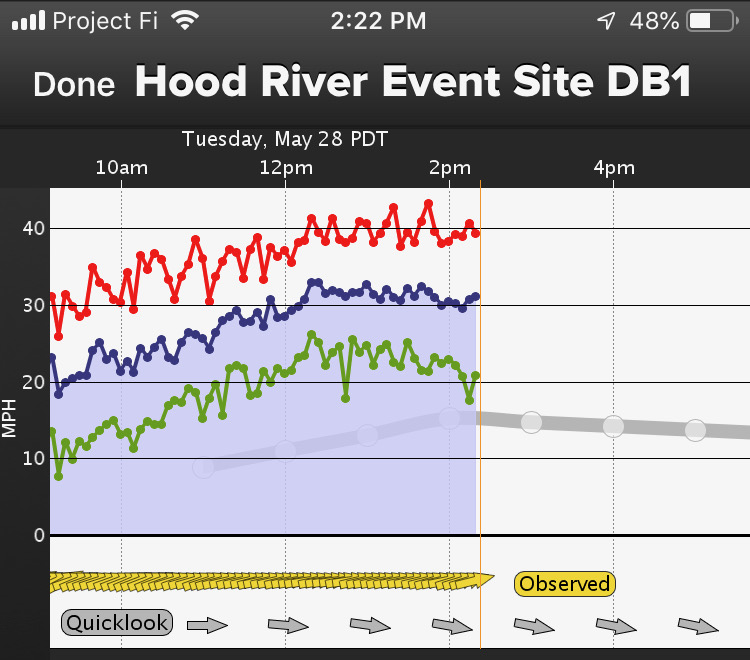 I was completely overpowered. I had the trim pulled all the way on, and the bar sheeted all the way out to the stop, and I still couldn't slow myself down in the gusts. I know we don't get a ton on days like this, but we de get a few every year, and I hate missing out for lack of the proper gear. I was wondering who makes kites in sizes smaller than 4m. Yes, I know the Neo comes in a 3m size, but I'm looking at my other options too. This is my only Neo (I have a quiver of F-one Bandits, and another of Cabrinha Apollos, as well as a Flysurfer Soul) so I'm not married to Duotone or anything, just looking at what options people know about.

EDIT: Hmm, you can't fix a typo in a title.
Top

Pull out the surfboard or twin tip. Variety is the spice of life. I am 140lbs and go down to a 5m foiling.
Top

Having a bar with really short ( say 15 m ) lines can also help take some of the power out of the super-windy days.
Top

I had great sessions on 3m Peak4 yesterday and today. But I can't say I'd really want to hydrofoil in 40 knot gusts with it. I was grumbling because we had 27g30 knots, and although not overpowered, I would have preferred less wind. But I mention the peak because of the way it depowers and sits deep with so little pull.

Clouds have a similar appeal to me for a small kite.

Small Boxers are nice but are more aggressive than a Cloud. I would probably use a surfboard with the Small Boxers in those winds.

Ozone Uno has a narrow leading edge with tendency to fold when you loop to start but is fine once foiling.

I also own a quiver of 4/5/6 and 8m Bandits and also a 3m Breeze. It is excellent for hydrofoiling in strong winds, super smooth and progressive, my no limits kite!
Top

My upper limit for a 4 m kite would be average winds of 20kts. I second above recommendations for small Clouds or Concept Air Wave 3M
Top

Indeed Conceptair Wave in 3m ... and it even exists in 2.3 meters for foiling waves , tested and own by a local expert in foil waves here in south of France (and 3m); wave 3m is from 3 local users here the best high wind kite they ever had 98they are foiling with it), no lift and extremely safe and comfortable even around 45 knots ( after their long lasting reluctancy to swap from LEI to foilkites in high winds, and once comparing to TT riders with 5m LEI at the same moment on the spot: having all their kite instable in the gusts); Waves have now double intercell cloth for improved resistance to impacts;

I had a Viron 4m that I sold : not great in high winds ( profile is certainly too thick, body drag is a pain, turning the kite need to sheet-in); I still need to test my Viron 2.5 m, but almost convinced that a Wave would suit far better, just a matter of budget in my side.

I still own a old LEI 2m (airush monostrut)

https://cliniquedelaplanche.com/kitesur ... -6471.html
not tested yet
Top

I looked at the graph today after work and went mtb in Post Canyon instead of foiling. So strange, as I used to LIVE for days like this, and mtb in medium to light winds. Just the reverse now. I keep saying I need to get back on my directional on big swell/wind days, but every time I do, I am all, "eeeeewwww, I am on the surface, I am over it." Bad attitude on my part, I suppose, or just change.

Doyle really liked the 3m Z the other day, thug it was not nearly as windy as it was today.
Top

slowboat wrote: ↑
Wed May 29, 2019 9:14 am
My upper limit for a 4 m kite would be average winds of 20kts. I second above recommendations for small Clouds or Concept Air Wave 3M

Agree, for many average weights on wave foil wings, a 5 m2 kite is too big from 20 knots, so quite often you need a smaller kite.

Also, taking a surfboard instead does often not make sense.
As if there is sideshore and good swell, YES, it is the thing most do.

But very often you got onshore winds, maybe wind chop and no swells - here a hydrofoil excel bigtime and small kites can be a blast.
Especially because a surfboard in onshore winds sucks bigtime, whereas foiling in more or fully onshore conditions can be a blast, actually I find it better than when sideshore, on a foil.

And nothing worse than being too powered on a foil when windy, especially if there are some waves, even wind waves.