Peak have as much range as any good LEI. 10 - 14 HF sweetspot isnt small - or we have different perspective about sweetspot

Really interested in the reports here. Was about to start a thread with the exact same title to see what everyone is experiencing. All these videos surfacing of people pushing low wind limits while also going with smaller and smaller kites is pushing me to want to buy a new kite

In my case using super high volume boards that don't sink, large wings, and being able to get going with as small a kite as possible. All on low-wind, gusty, deep water launch, flat water spots. Though it's confusing to see some groups gravitating towards things like the Pulsion 12m while others can get away with Peak 4 in much smaller sizes. For my needs of deep water launches, I'd love it if the smaller single skins worked on the super low end (for ease of launch/landing alone).
Top

Pulsion 12 will pull MUCH stronger than small Peaks. If you can live with peak and huge board and wing is up to you. I have quite normal moses onda 633 /1200 cm2/ and Pulsion like kite are better match for sub 10. I must agree that i extrapolate my estimate cause i never flown bigger Peak than 8. Above 10 knot Peaks are HEAPS better than anything for everything but jumping
Top

@drsurf: Do you have any footage of you or others foiling in light wind withe small peak4's? There are unfortunately not a lot of new videos to find.
Thanks
Top

kit3surfer wrote: ↑
Sat Jan 25, 2020 12:52 pm
@drsurf: Do you have any footage of you or others foiling in light wind withe small peak4's? There are unfortunately not a lot of new videos to find.
Thanks

Hi kit3surfer.
No I don't have any videos, and you're not the first to ask. I'll have to get my partner to shoot some footage of me on the water so you can see I'm not making outrageous claims

@drsurf, make sure you film a flag or have a wind meter to show its 8knots, as I still find it hard to believe using a 5m kite in such low winds would be a good choice.
Top

no need to be such a disbeliever - look what they can do in 10 knots with static 4m wings. I think with such efficiency it is possible but it must be done at extraordinary kay lenny level.
Top

It’s these amazing skills (like Marc Blanc too) that are exciting to watch. They make me wonder about the low end with High volume boards to reduce the water start power factor. If we’re already on the surface, how much kite do we really need to get on foil and stay upwind in 7ish knots. Time to keep practicing

tomtom wrote: ↑
Sat Jan 25, 2020 10:14 pm
no need to be such a disbeliever - look what they can do in 10 knots with static 4m wings. I think with such efficiency it is possible but it must be done at extraordinary kay lenny level.

Sadly the session I was out foiling in 7-8 knots was one of the few that I forgot my gopro with me so I don't have a video of it.

I do have the sensor data from that session though, it was a very interesting session because I managed to stay foiling the entire time right through a 180 degree swing of the wind direction! 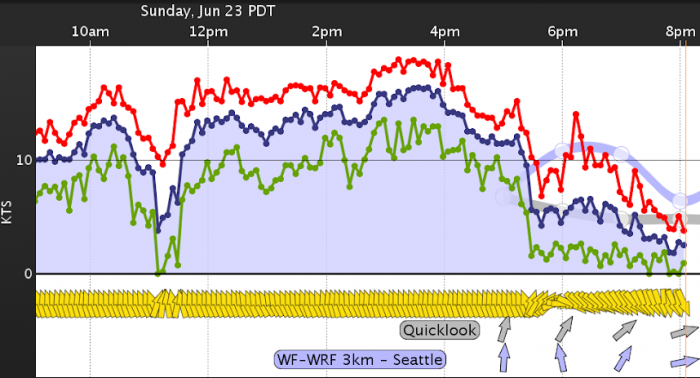 Heh, forgot I even made this thread. Didn't realize there are three pages of rants now.

I've tried the Outwit with the M280 wing and the 11m Peak4. The 11m was flying when a flag on a house near by literally wasn't moving and just hanging down. This was at the end of the session when I was drying the Peak. I had to keep looping the kite to keep it in the air. Just fell out of the sky once I stopped moving it.

One day I measured the wind gusting to 5mph on the beach. Well, I thought, this is what I've wanted to try: M280, Outwit, Peak4 11m. Got out on the water and had a few attempts until I put the kite in the drink. Climbing up on the board, while flying the 11m in such low wind is very hard. Once up on the board on my knees, I start floating downwind towards the kite. I start to lose tension and need to move the kite but the lines are slacking because there's nothing to resist against. I kept falling off the board trying to pull in a lot more line than I could balance with in order to keep the Peak flying. Took quite a few tries until I was finally able to get up on my feet and fly the Peak but due to lack of resistance and slowness of the 11m I was not able to get speed and lift off the foil. After a dive into the power zone or a loop, the kite loses all the power because I keep drifting towards it. Didn't get up on the foil even once and even if I did, there's no way I would have made it upwind.

That was a while ago, before I had the 8m. I picked up the Peak4 8m because I was hoping it would be a little faster and give me time after I climbed up on the board to bring it back to zenith and drop into the power zone before it started to stall out like the 11m did. I haven't tried it with the Outwit yet but I have done some 7-8mph rides with it, the Iwa and the Slingshot Simulator board (32L?). I could work the 8m fast enough that once up and sinking, I could generate power fast enough to pull me out. Granted those sessions also ended with a swim back in. A single mistake puts the Peak in the drink when the wind goes LOW and you lose tension.

It's fun to push the limits of light wind but not always rewarding. I don't want the 13m Peak because I don't want to swim in with it. Playing around with these boards/wings/foils have taught me how to foil pump though. I can now free pump the M280 and the Maliko tail for 25-30 seconds after being towed in on a jet ski. I've been trying the new 18W tail but it's a completely different beast and still debating on the full GL wing investment. End goal is to try and catch the junkiest "waves" on a SUP/prone that deep Florida Panhandle has to offer but that might never happen...