busted gear and egos! tell me your sad hydrofoil stories

While learning, I bent the fuselage running aground, bought a new one, bent that, got it straightened. Had to keep trimming a centimeter off the mast to get the rounded edge off.
Then snapped that board slamming into a sand bar fully loaded mid-gybe.

Dinged the rail of my third board putting it in the car, then a hole in the bottom of the board (how?!?!) hitting a rock...

Hit a breakwater wall that had sunk under the water... front wing got a bit of a ding in the LE but sadly a slice through the skin on the bottom.

Discovered cracks in the skin of my pocket board, got them fixed professionally, then a couple of sessions later discovered they'd come back.

Creased the board. At least now, it'll be stronger than ever!

Oh and second session my latest new wing, I fell off and the board sailed into me, and the wing hit my spreader bar and put a tiny chip in the wing

hello Rh , thats a major failure in the carbon mast didi you fix it? how ?
Top

Both the STRUT 11 mm, and Board base plate 7 mm, were made from Aerospace ment for satalite use carbon fiber, really, shoots not to spec.
Amazing stuff but so stiff almost brittle.
I connected like this, 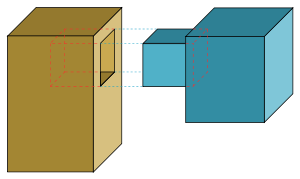 Then layed up carbon and vac sacked.
Lasted a few years, hit a twisted wire fish net support at speed and it broke.
Was lucky that some tissue remained attached otherwise would have sank.
Now cut to about 78 cm and top molded to fit K box and bottom KETOS fuse.
So far so good, often lend it to friends who rework their Struts or want a little shorter for any reason.
Can be seen in my post covid construction.
R H
Top
Post Reply
13 posts