kitexpert wrote: ↑
Wed Dec 18, 2019 5:27 pm
Rocker line, flexing/stiffness, board structure, even pads/straps in some respects; they are all primitive and only partially executed in all contemporary kiteboards.

I wonder where is true creativity here. It is hard to tell difference from new kiteboards to 2006 boards. Ok, some rails to bottom have been introduced, adding drag of course.

Nice build however in this thread.

I think to some degree you are missing the point of KISS. Keep It Simple Stupid. You say all boards are primitive and only partially executed. I would say they are fit for purpose, are executed well and are cost-effective. Making something complex and expensive is easy, Making something that is simple and works well is a lot harder. There are many boards out there that really rip at their intended purpose.

Has there been any revolutionary products for boards in the last 15 years? I would say hydrofoils are revolutionary. As far as surface boards are concerned I would say no. There has been no revolutionary new board. However, we have had a significant amount of evolution in the last 15 years. Is a board of today a big step change better than a 2006 board? Yes, it is. The changes are in tweaking the measurements and materials of construction to obtain a better product. The magic is in those numbers of rocker line and outline shape and flex ration and materials of construction. Looking at boards outwards they look very similar to 2006 boards. But the performance improvement is a massive step change.

Kites have undergone a similar evolution. Looking at a 2006 kite to a 2019 kite. The materials of construction are similar, the kite looks physically similar. But all those tweaks to the geometry, improvements in materials have made kites a vast amount better than a 2006 kite.

You can look at most products that are past the initial revolutionary phase and are into the evolutionary phase and say the same thing. A 2006 mountain bike and 2019 mountain bike look virtually the same. To the layman, they don't look to have changed at all. However, there has been a similar step-change due to evolution and the bike of today is far superior to the bike of 2019.

So...... Look for the performance increase. Try to understand why one board is better than the next. Why do people rave about that board and not that other one over there? The answer will be in the secret sauce that is their recipe to build. It will be in the combination of rockerline, flex characteristic, outline shape, weight.

2006 is a bad year to compare kites because bridled LEI's were just invented. But if you take best say 2008-2012 kites you can compare them with modern kites easily. It is interesting to see that structurally modern kites are simpler and cheaper than (some) kites were say 10 years ago, partially this is because kites are made lighter in weight today. If someone thinks 3 strut kite turns as smooth as 6 strut kite he is just silly.

Year 2006 best foil kites are comparable to many foil kites that are sold today, but of course there is more and better foil kites now available. There have been development for sure, but not that much many think. Race kites are of course an exception as a new kite segment.

As to a smoother turn, I'm not even sure what that means. Some kite produce power when they turn, some don't, some can do either depending on how tight the arc, but with respect to turning, smooth is difficult to understand. I certainly don't know of any kites that are rough turning!
Top

As to a smoother turn, I'm not even sure what that means. Some kite produce power when they turn, some don't, some can do either depending on how tight the arc, but with respect to turning, smooth is difficult to understand. I certainly don't know of any kites that are rough turning!

Turning solidly, producing power, fast and not flapping. Strutless or single strut kites (which are familiar to me of these) are flapping like crazy during the turn, it is annoying and it of course loses speed.

I'm afraid you don't know kites which are not rough turning if you only have struttless kites. Or does Ultra becomes smoother if that one strut is taken away? Good kite though, but smooth it isn't.
Top

Sorry for the OT

Ive had at least 15 kites between 5 and 9m with between 0 and 5 struts. I currently have 2 strutless, 3 single strut, 2 two strut, 2 three strut and 2 five strut kites. Have had loads of 5, a bunch of 3 and even a few 4 strut kites over the past decade.

Turning speed has way more to do with planform and bridle than strut count. Strut count correlates more to riding style and where a kite excels in it's range.

A 5 strut like the SS Rally is pretty slow to initiate but eventually turns with some pace if you hold it. They can be pinwheeled on axis producing the least amount of power of any kite I've owned. Safest kite ever to loop tight. A 5 strut C like the SS fuel will react and turn plenty quick but loop wide and so powerfully you'll separate out your own plasma if your not careful.

My single struts are the smoothest power production of my quiver, where I have 3 and 5 struts that can give you whiplash if you don't know what your doing.

My strutless and single strut kites will flap overpowered, but not really in their range. More when sheeted out suddenly than turning and again, more if your no good at the bar. Clouds are the fastest turning kites I’ve owned where my single struts are not really that fast. So I have clouds in large and med and solos in small, smaller and tiny.
Top

Went out in my cross off surf location today. This is where I thought the old board would have been better.

Nope. This board kicks in cross off on the waves. Down the line jacking waves with some freaken Hard top and bottom turns were so smooth and tight.
I really enjoyed smashing a bottom turn and then popping out of the water floating through the air then seamlessly slicing back into the water to charge a hard top turn ohhhhhh......

Stoke level is off the charts.

Then I was doubling up waves on the way back out. Jump off one wave lip and land on the back face of the next... fark yeah.
Top 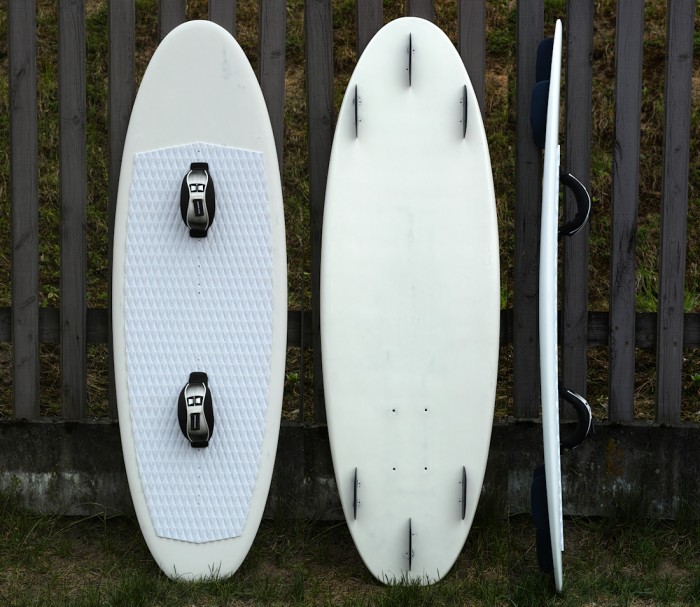 That looks like a nice board but it isn’t exactly a mutant by my standard.
Top

These pics show the board in its "twintip" configuration. There is a lot of room to shift the footstraps back and fins can be changed as needed (the board has the standard FCS inserts).
Top
Post Reply
68 posts