Day two of the freestyle competition here in Ilha do Guajiru is coming to an end, and we finished men’s and women’s rounds 3

Athletes had a very early start today, as we have to schedule the competition according to the tides of the lagoon to ensure optimal riding conditions. 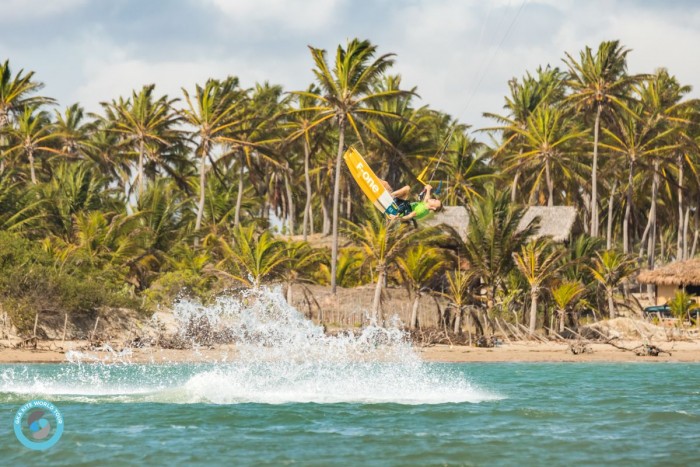 First up were the men, and they were rewarded for getting up early with ideal conditions, flat water and steady wind so most competitors were on 11 to 13m kites.
Here’s what went down in Hura Beach today: youngest competitor of the event Davi Ribeiro placed second in his first heat of the day, and it really showed that the 12-year-old Brazilian has gained a lot of experience since his first GKA competition last year.

Liam Whaley’s riding was solid and powerful as expected and very much in control, proving he’s one of the top contenders in this event.

Alex Neto, another favourite here in Brazil, demonstrated consistency with move after move of doubles, and his Slim 7 was one of the best tricks of the day.

The best heat of the day goes to Guilherme Costa up against Adeuri Corniel. Costa scored a huge Slim 9 executed with style and power, but Corniel dominated the heat and took the lead.

Everyone was stoked to see Carlos Mario back in the water after a long injury, initiating his comeback with a nice Front Blind Mobe starting off the heat. Unfortunately, his injured biceps troubled him and he kept getting it checked throughout his heat, but winning heat 5 regardless.

The battle between Maxime Chabloz, reigning GKA Distance Battle Champion, and Manoel Soares was epic, but Maxime had one of the best moves today with a Back Mobe 5 with a double grab, showing us what pushing limits and tweaking out the moves really means.

Valentin Rodriguez, current GKA Freestyle World Champion, saved his heat with a huge Back Mobe 5, but Lorenzo Calcano from the Dominican Republic was putting pressure on Valentin with a big Backside 317. Valentin has to up his game in order to keep leading, as we’re seeing high overall scores with the top riders in this competition like Erick Anderson, Alex Neto, Val Garat and Liam Whaley. 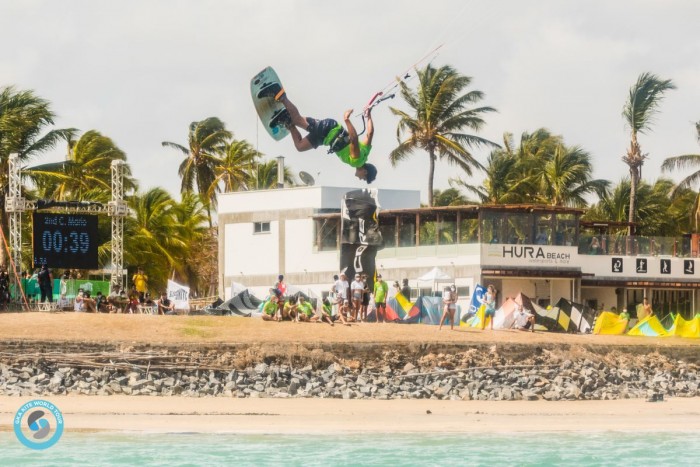 While waiting for the tide to come back and fill up the lagoon so we could start the women’s round 3, the wind picked up and when it was time for the women to get ready for their heats, most riders were on 7 to 9m kites. Conditions were rough compared to this morning, so this was an added challenge in the women’s heats.
Rita Arnaus, overpowered on her 7m, landed every trick and a smashing Hinterberger 3 despite rough conditions, earning her the nickname “Miss Consistency”. Therese Taabbel’s true wakeboarding style riding made for a very stylish S-Bend to Blind and scored big for a simple trick because of her style, commitment and power. Brazilian rider Dioneia Vieira was unfortunately really struggling with the choppy conditions and couldn’t show her full potential.

Natalie Lambrecht threw down some stylish and powerful moves, winning her heat while Pippa van Iersel even tossed in some Big Air elements and kiteloops, coming in second in the heat.

Paula Novotna dominated her heat with strong riding, but Claudia León clearly has been training intensely during the off-season and it showed in her skills and confidence today.

Up against the current GKA Freestyle World Champion Mikaili Sol was Polish rider Katarzyna Lange, showing some very stylish, fluid moves and confident riding, but Mika dominated the heat and won with the biggest move of the day, a huge Slim Chance.
Top

Day 2 should be available later. I will post it on here.

Above the livestreams...
Top

Thanks Toby, looks like a nice spot. the tricks all merge together though. I'd prefer to be doing a downwinder on the ocean!
Top
Post Reply
7 posts • Page 1 of 1