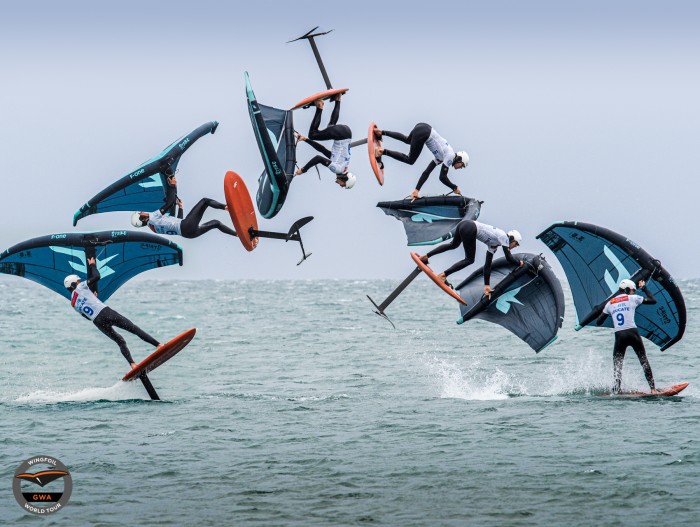 We had a sopping wet morning here in Leucate on Saturday, with a thrilling 8 degrees Celsius, the perfect temperature to chill the rider's nerves before their heats.

But the rain certainly didn’t dampen the mood as finally…
THE WIND ARRIVED!

Competitors made their way to the beach nice and early, croissants in mouths and suited up in an extra layer or two to the 8 AM skippers meeting held at the shore.

After checking the race course the head judge and race director agreed on the same setup they put together the previous day, ensuring a smooth and speedy start to the competition. With the call for a first possible start at 9.00 AM, the athletes began to strap in as they knew a long day lay ahead of them.

You can really spot the difference here on the beach of the riders who have been locked down for training in the tropics to the troopers who have come straight from the icy lakes of Switzerland. Will this be a disadvantage in the water? Balz Muller (CHE) makes it look like it confidently standing in his shortie.

It’s was a tough morning here in Leucate. There was a cold NW blowing 20kts gusting to 25kts, increasing throughout the day and unexpected torrential rains making it hard to see the signal flags from the ocean and hear the judges call . With no shelter, the riders found shelter beneath their Wings between heats.

We raced through the men’s Surf-Race heats in the first 2 hours of the day. There were a few restarts to the heats, unsurprisingly. The challenging conditions made it especially hard for the riders to time their start.

The judges have decided to run only one elimination round of the Women’s Surf-Race discipline, as they want to take advantage of the gnarly conditions for freestyle later in the afternoon! By 11:30 both men’s and women’s finalists had raced their way to the top. But this is not the final results, we will only know the winners after more eliminations today.

As the wind continues to howl, it's time for the Men's Surf-Freestyle discipline to begin! With the record-breaking amount of men registered for this competition, there will not be enough time to get through to the finals on the same day, so the judges kindly released the women for the rest of the day allowing them to restore the feeling in their toes for tomorrow!

The wind is tricky. Off-shore, gusty and flat so it doesn’t help for tricks. But the warriors persevere throughout the day, whipping high scoring tricks out their back pockets!

Titouan Galea (NCA) flipped the judges out with one of his famous backflips 7.57 – first one of the day! Balz turned the heat up a notch on the last heat of round landing an impressive Blind Frontside 360, FS 360, TS 360 FS, and a high scoring Backloop giving him an overall score of 25.57!!

The wind really kicked in by round two and the height got bigger! The riders were giving all they got here at Mondial Du Vent. Looks like depriving athletes from action for a couple of days has its advantages! We saw some amazing Railys' being tweaked, multiple rotations being added to spins, new one-footers, and grabs… The competitors really added a variety to their tricks, focusing more on quality than quantity.

Local Rider Nicolas Akgazciyan (FRA) pulled the first front flip ever attempted in a competition scoring a 7.8! He was ripping his home spot well!

Over the course of the day, the riding became more consistent. Titouan Galea (NCA) continued to flip his way up and over breaking his previous backflip score with a staggering 8.67! Klaas Voget (GER) showing multiple variations of moves with crazy innovations scoring him one of the highest heat score of the day (18.23). But Balz came back and wrapped up the day with a powerful BackLoop scoring 9.37 – sending him home with a 26.53, the highest score yet!

After making their way through round 3, the riders were released, after a long wet day here in Leucate. The riders needed to rest their body after 9 hours of heat and cold therapy they endured over the rounds. The competitors all left the beach still flying with windblown eyes and smiles plastered across their faces as they head home.

Its AMAZING what they can do, I am really stoked

If you are winging yourself, you gotta be even more impressed

WTF is a Surf-Race???
Surf and Race don't typically go hand in hand, do they?
Surf and Leucate don't either...

We need to ask the GWA boffins what they had in mind when they came up with that stuff...
Top
Post Reply
3 posts • Page 1 of 1